An extreme close up of the head of a Greengrocer cicada. Picture: Alan Kwok

A huge, green insect with a screeching call so loud it can deafen itself has hatched in South Australia after years underground.

The greengrocer cicada was seen at Mt Gambier, SA, this week measuring a whopping 6cm long, which is 2cm longer than average. It could have been underground as a caterpillar for around seven years and will be looking for a mate for a six-week period before it dies. Scientists aren’t sure exactly how long they stay underground for or whether it’s always the same number of years. A cicada emerges from its shell.

There could be “many thousands” of these cicadas emerging with it, according to UniSA Professor Chris Daniels, who said it’s not possible to say yet how many will hatch this season.

“They all emerge* at once, they mate* like crazy and then they die,” he said.

“So you get some appearances of really large numbers of cicadas every two to 17 years, depending on the species.”

VIDEO: A different species of cicada lands on this Dad’s face

This particular species of cicada, the greengrocer or yellow Monday depending on the colour, can spend up to seven years underground feeding on plant roots before emerging.

And when they do emerge — usually near forests around Christmas time — the sound is deafening.

“They’re so loud, they can actually deafen themselves,” Professor Daniels said. Cicadas are some of the loudest insects in the world and scientists believe this species could be about the loudest. There are thought to be between 700-1000 species in Australia (and many more overseas), although only 300 Australian species have been described and named.

“They would put the Red Hot Chili Peppers to shame,” he said, comparing the giant insects to a famous US rock band who play really loud music.

VIDEO: The sound of a cicada calling

The cicadas’ noise, which is used to find a mate as quickly as possible while fending* off predators, can reach up to 120 decibels*, which is a noise level described by noise experts as in the “extremely loud” range close to a level that is painful for humans. This is the same volume as heavy machinery, standing within 1m of a car horn, or being in the audience of a rock concert.

Around sunset is the best time to hear the male’s harsh, high-pitched call for females in their six-week noisy party. 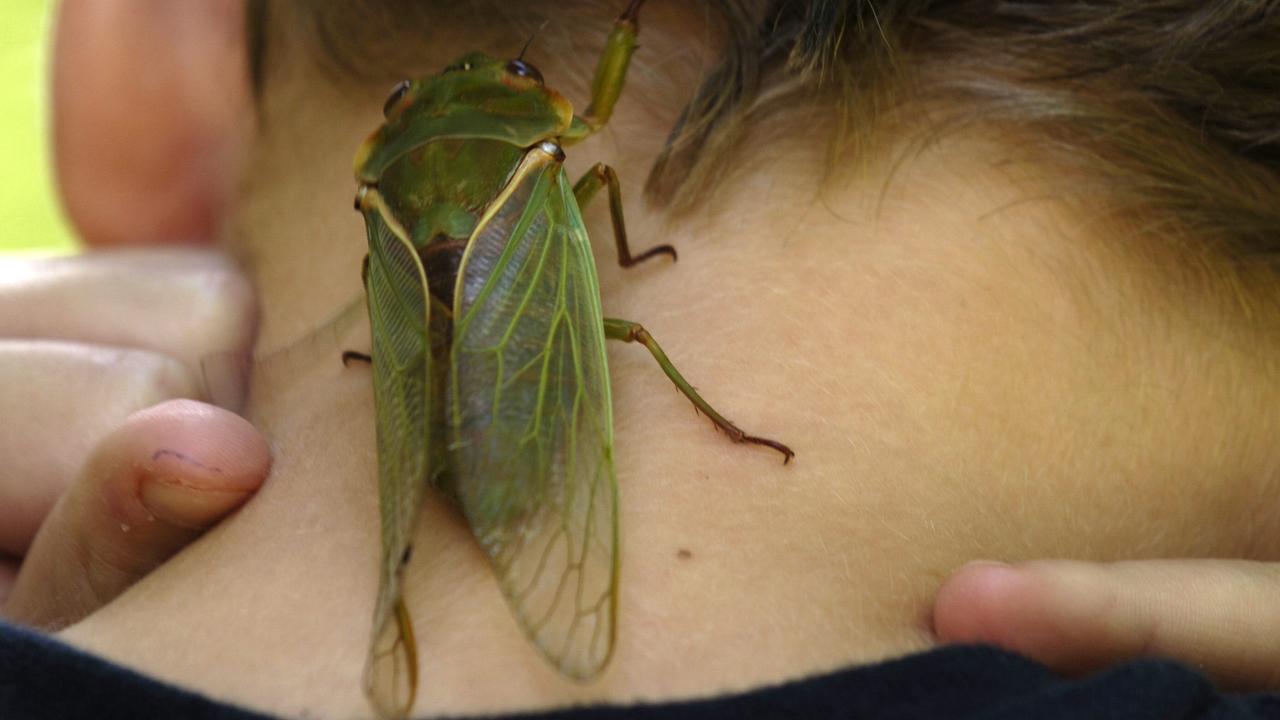 A greengrocer cicada tickles the neck of a child.

People eat cicadas in many countries. In Papua New Guinea, for example, they are roasted first. Females are the meatiest.

If you stand under a tree in the evening and can hear cicadas, notice whether you can feel fine drops of moisture, like misty rain, falling on you. That’s cicada wee.

The noise comes from a pair of organs called tymbals on their abdomen, which they flex. emerge: come out from hiding

mate: meet up for breeding to make young ones

decibels: the unit of noise measurement

1. How long was the cicada found in Mt Gambier?

2. How many weeks will it be alive above ground?

3. How many cicadas does Chris Daniels think will hatch?

4. What is the noise level of a cicada screech?

The sound of a cicada is very distinct and very noisy. Listen to the video of the cicada calling. Try and think of words that can describe the sound.

Write a poem (you can choose the rhyming pattern) using descriptive language and onomatopoeia (words that suggest the sound it describes — such as ‘screech’, ‘boom’ etc) to paint a picture of the noise you hear when the cicadas emerge. Use information from the article to explain some of the life-cycle of cicadas. Your poem should describe what is happening without actually saying it. Be a bit cryptic so the reader is surprised when you use the last line of your poem to say it is ‘cicada mating season’.

Here are two examples of how you could start. You may come up with a better way to start.

1) They emerge all at once,

From deep beneath the ground

They flex their tymbals

The sound pierces my ears

Extension: Use information from the article and from further research to draw a diagram of the life-cycle of the greengrocer cicada. Label your diagram and include as much detail as possible about each part of the life cycle.

Include any other interesting facts about cicadas around your diagram.

HAVE YOUR SAY: Have you heard or seen a cicada? What about another weird insect? Describe it. Use full sentences. No one-word answers.