An illustration of the Titanokorys, viewed from the top. Picture: Lars Fields/Royal Ontario Museum

About 506 million years ago, a strange marine creature thrived in tropical seas, menacing* prey on the ocean floor in what is now Canada as one of Earth’s largest predators* to that point in time.

Scientists announced on September 8 the discovery of fossils of a Cambrian Period arthropod* named Titanokorys gainesi in Kootenay National Park in the Canadian Rockies, within a vast rock formation called the Burgess Shale. 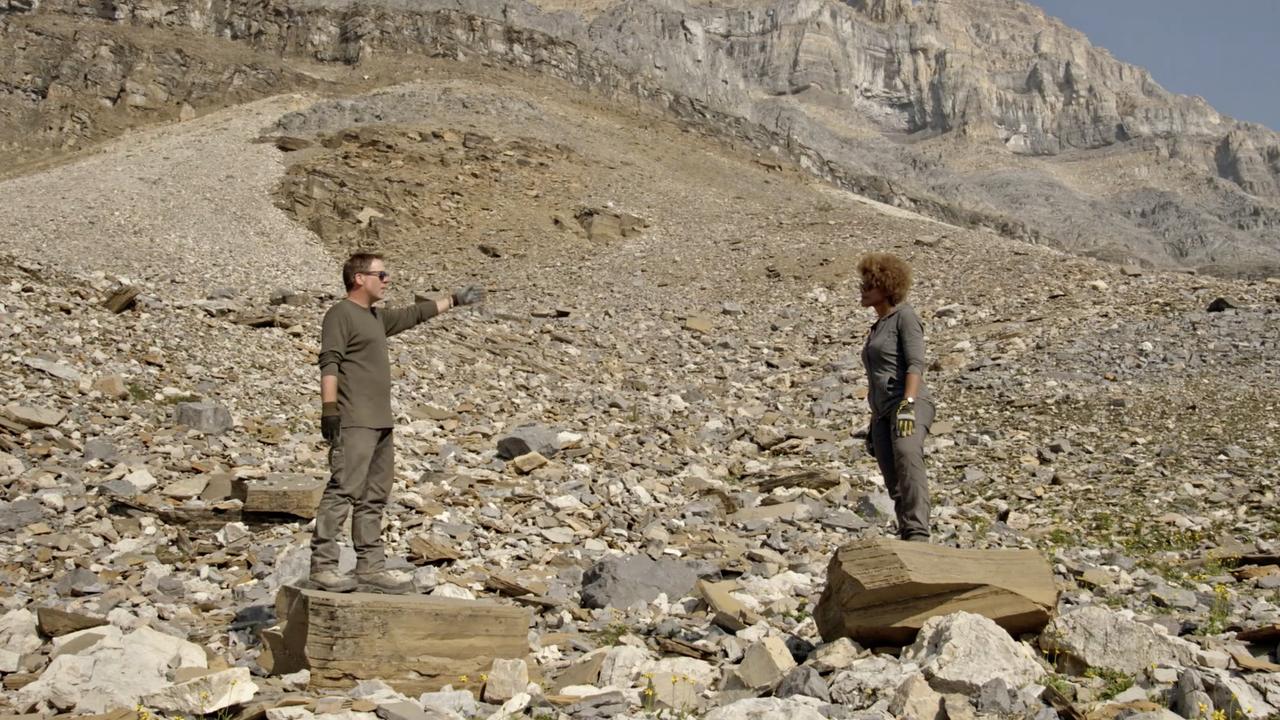 Titanokorys gainesi is named in honour of Robert Gaines, a long-time colleague of study lead author Dr Jean-Bernard Caron. Gaines is pictured on the left, on location at the Burgess Shale in Kootenay National Park. Picture: Andrew Gregg/Red Trillium Films

The name Titanokorys means “titanic* helmet” – and for good reason. Its body so resembled a science-fiction spacecraft that it has been dubbed ‘the mothership’* by palaeontologists. This creature’s head carapace* represented about two-thirds of its body length of roughly 50 cm. And while that may not sound big by modern standards, during the Cambrian Period – a critical point in the history of life on Earth – it was a giant.

“Most other life forms were smaller than a human thumbnail at that time,” said palaeontologist* Dr Jean-Bernard Caron of the Royal Ontario Museum in Toronto, lead author of the study published in the journal Royal Society Open Science. “By comparison, Titanokorys was longer than an adult human forearm. Yes, it was a giant dude.” 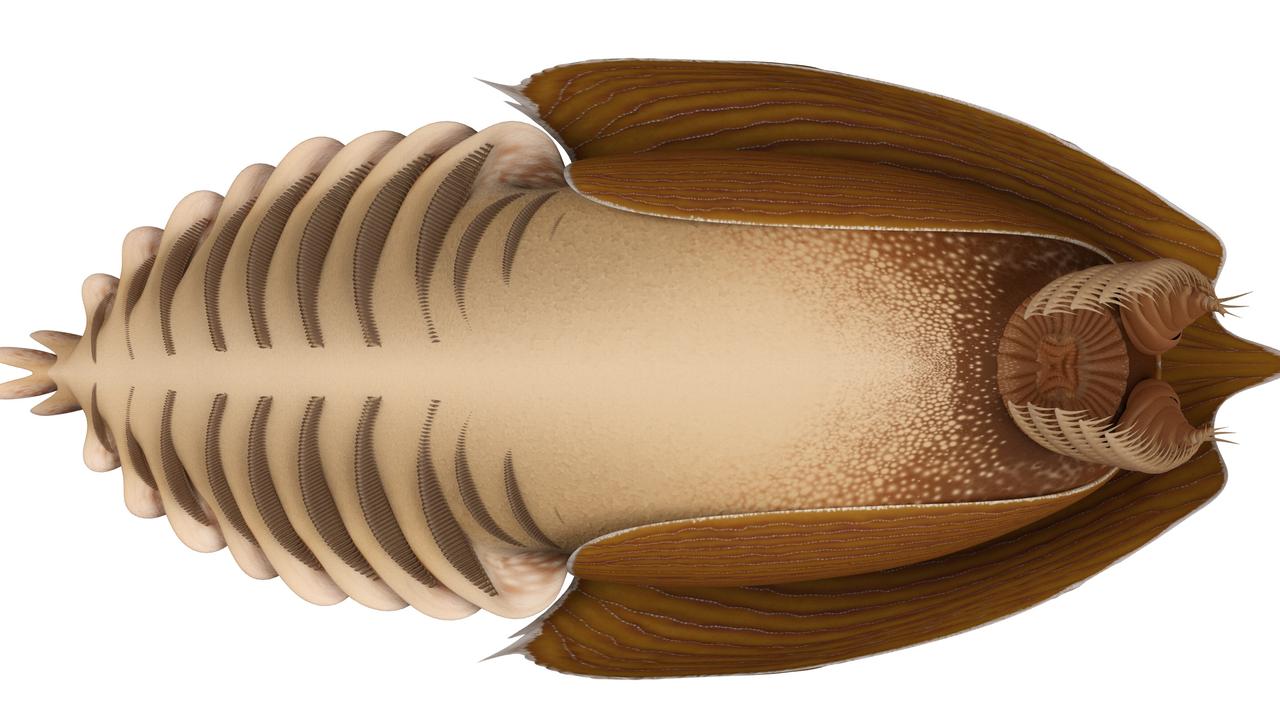 An illustration of the Titanokorys, viewed from its underside. Picture: Lars Fields/Royal Ontario Museum

Titanokorys boasted multifaceted* eyes, a circular mouth studded with triangular, toothlike structures, two spiny rake-like claws to capture prey, feather-like gills and a series of flaps on the sides of its body for swimming.

“Overall, the animal looked torpedo-shaped and was relatively flat, an adaptation to living along the sea floor. It could be compared to a giant swimming head since the body was so short – (a) very bizarre-looking beast indeed,” Dr Caron said.

It lived at a time when most of North America was below tropical seas.

“When the carapace fossils were first discovered, they were so unusual looking that we weren’t initially sure what sort of animal they belonged to,” said palaeontologist and study co-author Joe Moysiuk of the University of Toronto and the Royal Ontario Museum. “In the field we nicknamed them ‘the mothership’.”

The nickname “spaceship” was given to a smaller cousin also found in the Burgess Shale, a treasure trove of Cambrian fossils. 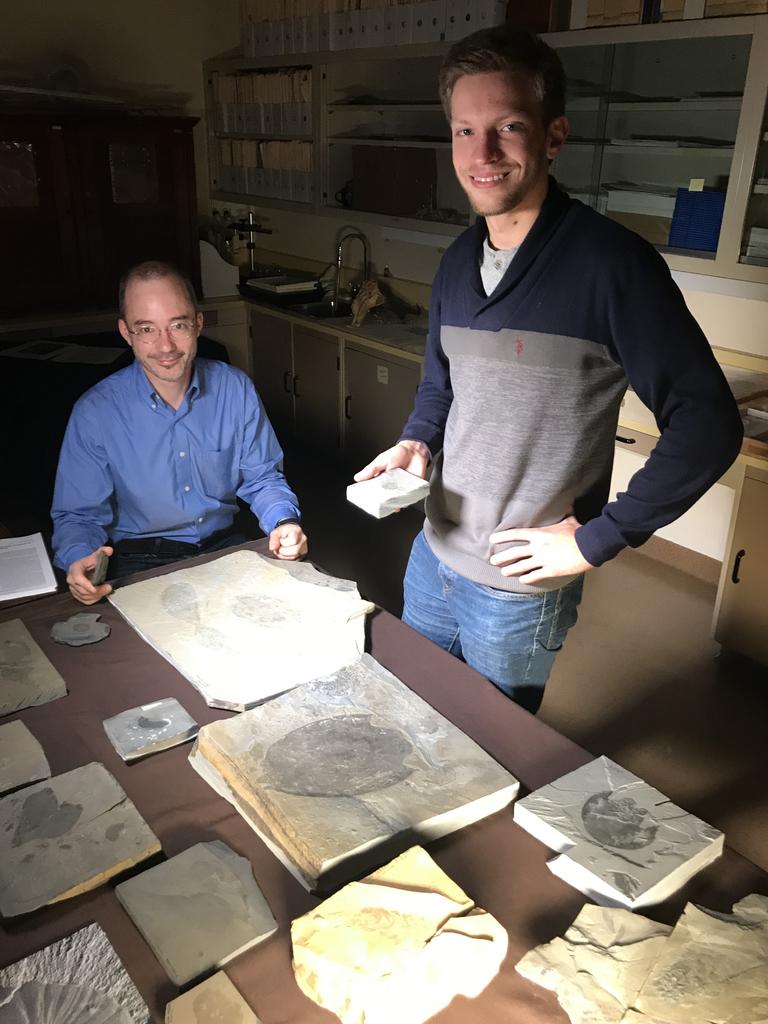 Scientists discovered partial fossils of at least a dozen Titanokorys individuals in British Columbia between 2014 and 2018.

Arthropods are a large group including insects, spiders and crustaceans such as crabs and lobsters. They are invertebrates* with exoskeletons*, segmented bodies and jointed appendages*. Its large head carapace makes Titanokorys resemble modern horseshoe crabs, though they represent different arthropod lineages*.

It was during the Cambrian Period, from about 542 million to 488 million years ago, when many major animal groups first burst onto the scene. The relatively short span of time in which this unfolded inspired the term “Cambrian Explosion”. 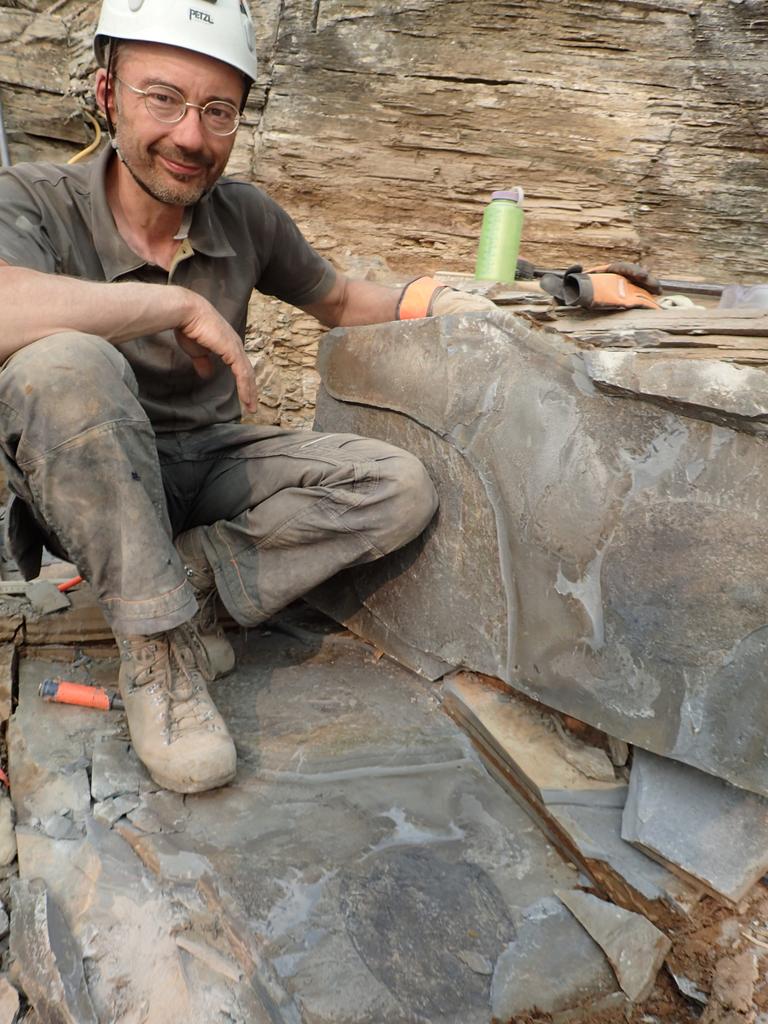 Titanokorys is a member of an arthropod lineage called radiodonts* that lasted from about 520 million years ago to about 390 million years ago. Another radiodont was Anomalocaris, perhaps the largest Cambrian predator, reaching about 1m long.

Spines on the grasping appendages of Anomalocaris were adapted to spear or grab sizeable prey, differing from Titanokorys. Titanokorys apparently fed on buried prey like worms, using its claws to stir up the mud and strain out any morsels*. Its claws were adapted not to grasp prey but to bring food toward its mouth.

“Titanokorys may have swum something like a modern stingray, undulating* the flaps along the side of its body,” Moysiuk said.

It lived alongside various arthropods and worms as well as the small fish Metaspriggina, an evolutionary forerunner of the planet’s many vertebrates, including people. CLASSROOM ACTIVITIES
1. Create an advertisement
Design an advertisement for Unusual Pets Magazine. The purpose of your ad is to convince people to adopt a Titanokorys as a pet.

2. Extension
How do scientists know so much about the amazing creatures that lived during the Cambrian Period? Write a list of all of the different things that you think scientists do to investigate life 500 million years ago. Use clues in the story to help you.