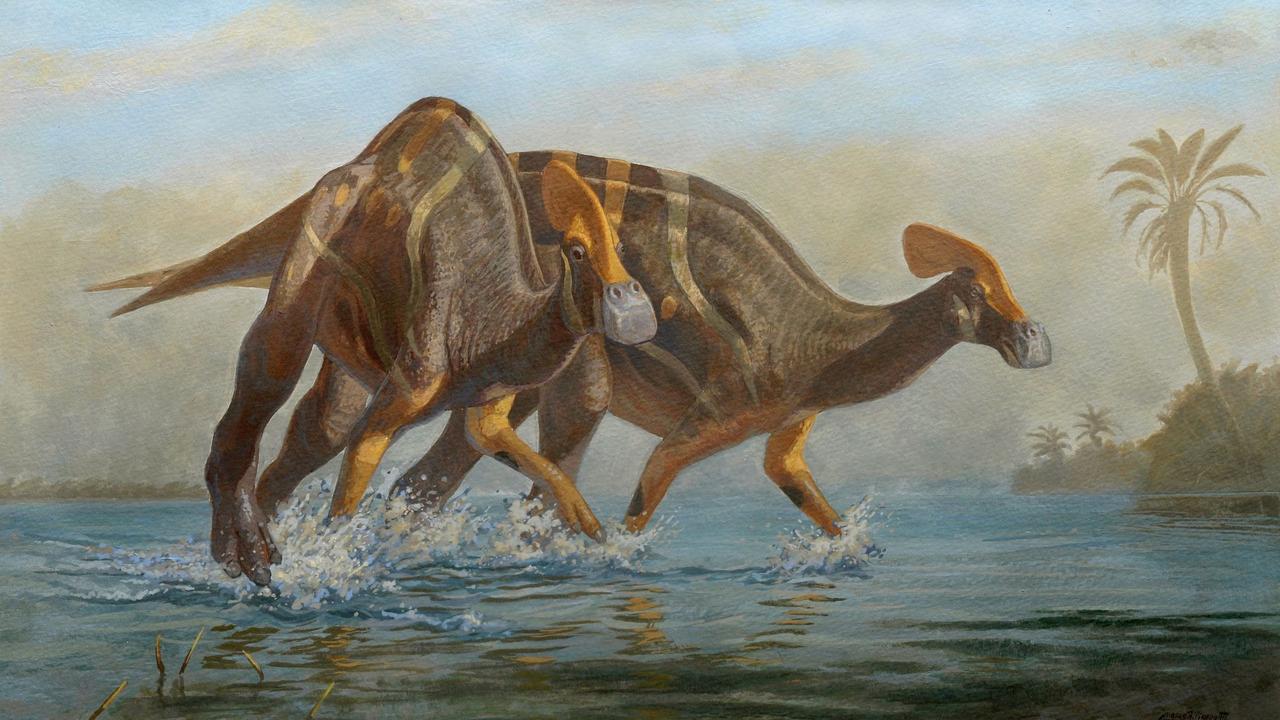 When dinosaurs roamed the Earth: this illustration allows us to imagine the crested dinosaur as it may have looked 72-million-years-ago. Illustration: Mexico's National Institute of Anthropology and History (INAH)

A team of palaeontologists* in Mexico have identified a new species of dinosaur, after finding its 72 million-year-old fossilised* remains almost a decade ago, Mexico’s National Institute of Anthropology* and History (INAH) announced.

The new species, named Tlatolophus galorum, was identified as a crested dinosaur after 80 per cent of its skull was recovered*, allowing experts to compare it to other dinosaurs of that type, INAH said.

The investigation, which also included specialists from the National Autonomous* University of Mexico, began in 2013 with the discovery of an articulated* tail in the north-central Mexican state of Coahuila, where other discoveries have been made. A new species of dinosaur called Tlatolophus galorum has been confirmed in Mexico. Picture: Mexico’s National Institute of Anthropology and History (INAH)

“Once we recovered the tail, we continued digging below where it was located. The surprise was that we began to find bones such as the femur, the scapula and other elements,” said Alejandro Ramírez, a scientist involved in the discovery.

Later, the scientists were able to collect, clean and analyse other bone fragments from the front part of the dinosaur’s body.

The palaeontologists had in their possession the crest of the dinosaur, which was 1.32m long, as well as other parts of the skull: lower and upper jaws, palate* and even a part known as the neurocranium, where the brain was housed, INAH said.

The Mexican anthropology body also explained the meaning of the name – Tlatolophus galorum – for the new species of dinosaur.

Tlatolophus is a mixture of two words, putting together a term from the indigenous Mexican language of Nahuatl that means ‘word’ with the Greek term meaning ‘crest’. Galorum refers to the people linked to the research, INAH said. The recovery effort needed to confirm that palaeontologists were dealing with a new species has taken nearly 10 years. Picture: Mexico’s National Institute of Anthropology and History (INAH)

Dinosaur could be the biggest ever land animal

CLASSROOM ACTIVITIES
1. Draw a diagram
Draw a picture of the Tlatolophus galorum and label it with all of the facts that you know from reading the news story.

2. Extension
Find out the names of four other crested dinosaurs. Draw the shape of each of their different crests.

Can you find out the purpose of their crests? Pictured are some of the fossilised remains of the Tlatolophus galorum in Mexico. Picture: Mexico’s National Institute of Anthropology and History (INAH)