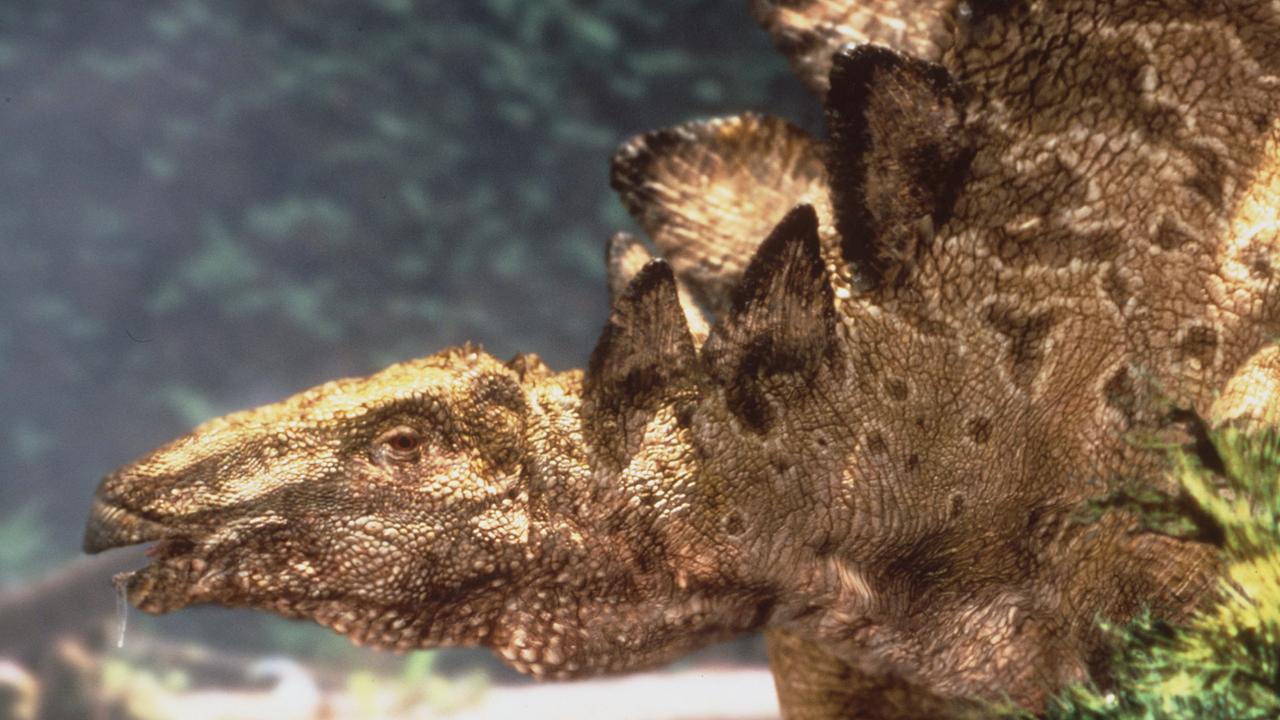 What a stegosaur could have looked like, as seen in the 1999 BBC fantasy documentary "Walking With Dinosaurs". Picture: BBC

Fossil hunters have identified a new species of stegosaur.

The armoured dinosaur, with a formidable* array* of bony plates along its spine, roamed Earth 168 million years ago.

The new specimen is the oldest stegosaurus ever found and the first to be unearthed in North Africa. Its discovery, in the Middle Atlas Mountains in Morocco, promises to rewrite the history of one of the best-known dinosaur groups.

The fossil hunters were part of the British Natural History Museum’s biggest dinosaur hunt in decades.

They found a few vertebrae and an upper arm bone and quickly recognised them as belonging to the stegosaur group. They have named the dinosaur Adratiklit boulahfa. “Adras” is Berber* for mountain while “tiklit” means lizard. Boulahfa refers to the area in the mountains where the specimen was found.

“The discovery of Adratiklit boulahfa is particularly exciting as we have dated it to the middle Jurassic ­period,” Dr Maidment said.

“Most known stegosaurs date from far later in the period, making this the oldest definite stegosaur described and helping to increase our understanding of the evolution of this group of dinosaurs.”

The species belongs to the thyreophoran group. Dinosaurs in this group had armour lined in rows along the body. 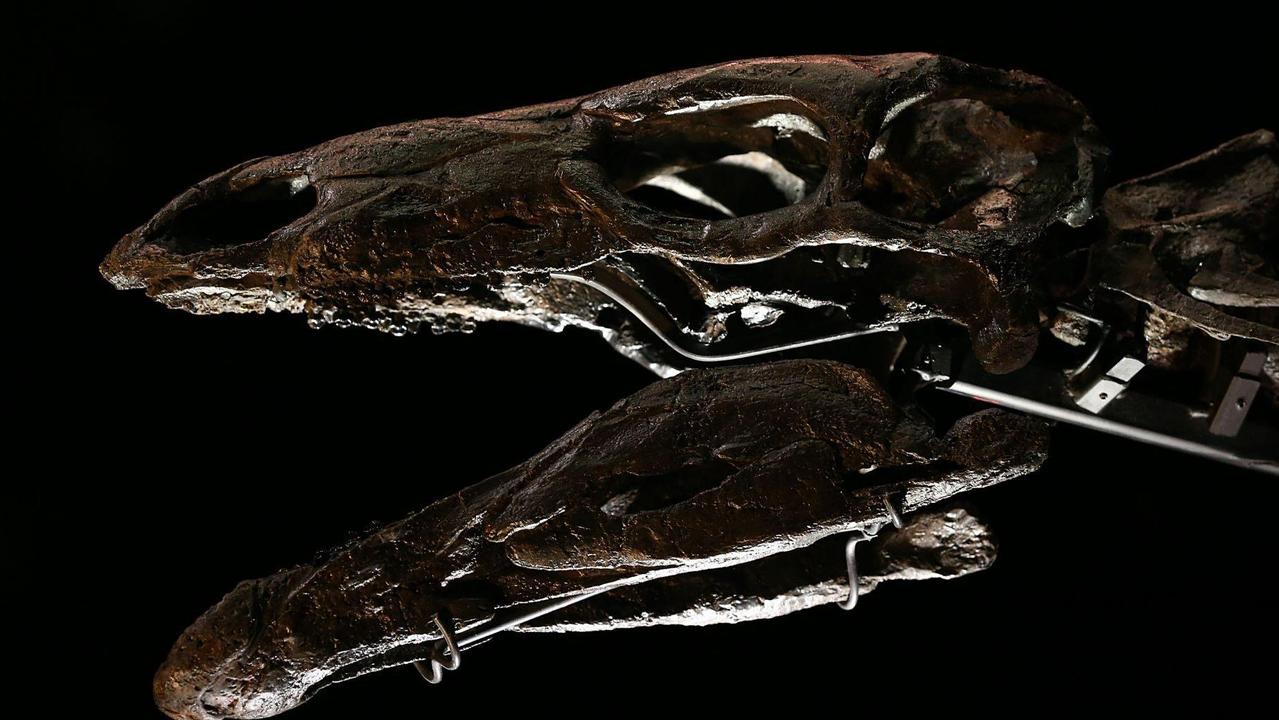 The world’s most complete Stegosaurus fossil was unveiled at the Natural History Museum in 2014 in London, UK. Picture: Getty Images

It had previously been thought that when Earth’s land mass was divided into two supercontinents, Laurasia and Gondwana, the thyreophorans were more common in Laurasia.

The new specimen, found in a rock formation from Gondwana, may lead to those ideas being revised.

Dr Maidment said: “There could be many more thyreophoran dinosaurs to find in places that have not been excavated.” Gondwana and Laurasia were the two big land masses on Earth during the Jurassic period, when stegosaurs roamed the land. Picture: United States Geological Survey

The find in Morocco came after a mission to North America, which took Dr Maidment and her team to a site in Wyoming, US, that is yielding tonnes of fossils 150 million years old. The fossil hunters spent months in the northern reaches of the Morrison Formation, a vast expanse of Jurassic sedimentary rock stretching across the American west.

“Stegosaurus, diplodocus, brachiosaurus, bronto­saurus, all the ones that you could name when you were seven are known from the Morrison,” Dr Maidment said.

The Wyoming expedition is the most significant fossil hunt by the Natural History Museum since 1987, when a team in the ­Sahara uncovered a “spectacular dinosaur graveyard”.

MEET STEGOSAURUS
Stegosaurs are known to have lived in the late Jurassic period, which is around 150 million years ago.

This new species lived about 168 million years ago, in the middle Jurassic period.

Stegosaurs were about the size of a small bus: up to 9m long, 4m high and weighing up to 5 tonnes. 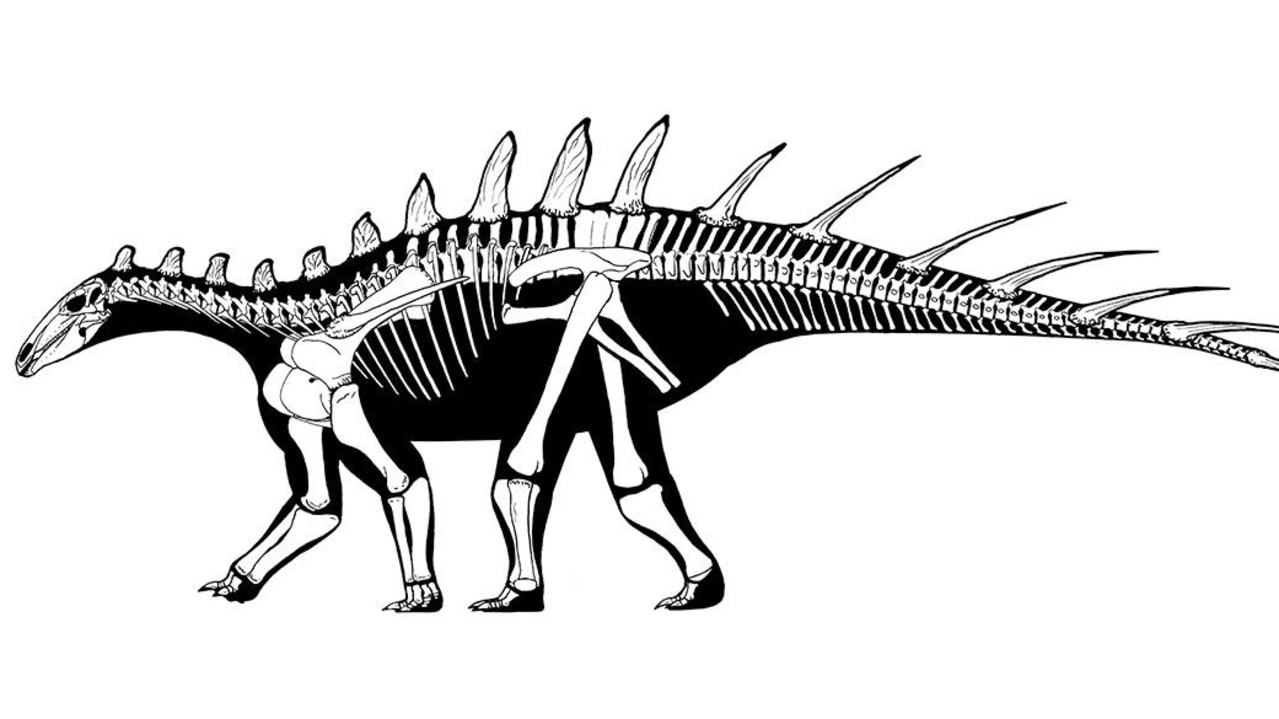 Thanks to two rows of bony plates along the spine, they looked bigger than they were. The plates were attached to the skin rather than to the skeleton.

Their armour and size would have made them look pretty scary if you’d been around back then to come across one, but as they were herbivores they probably weren’t very ferocious dinosaurs, except from the point of view of a plant!

Scientists believe they might only have been able to move at a maximum speed of 7kmh, which is about human walking speed.

They might not have been that smart as their brains were about the size of a ping pong ball.

Scientists know they lived in North America and now know they also lived in Europe and North Africa.

Originally published in The Times and reproduced here with permission.

CLASSROOM ACTIVITIES
1. Rewriting history
This new information means that many information books will need to be updated to include these new details.

Use your school library or the internet to find some previously published information about the stegosaurus. One or two paragraphs outlining where and when they lived should be enough.

Rewrite the paragraph or section of the information that needs updating with the new information.

2. Extension
Did you hear? Kids news and Studio 10 are looking for Australia’s best kids’ newsreader! Entries close this Sunday. If you are tempted to enter but haven’t had the chance to write a 30-second news story, this is the perfect article for you.

Most people love to hear about dinosaurs and learning new information about them. Rewrite this article into a 30-second news script. You will not need to include all the information from the article so choose the main idea of this story and the most interesting points to get the message across. You will need to come up with an interesting opening to your segment that captures your audience’s attention and then follow it up with more details of the news story.

If you wish to enter the competition, record yourself delivering this news segment. You can find details of how to enter on the Kids News home page.

HAVE YOUR SAY: Name this stegosaurus with something catchier than Adratiklit boulahfaits. What’s your favourite dinosaur?
No one-word answers. Use full sentences to explain your thinking. No comments will be published until approved by editors.