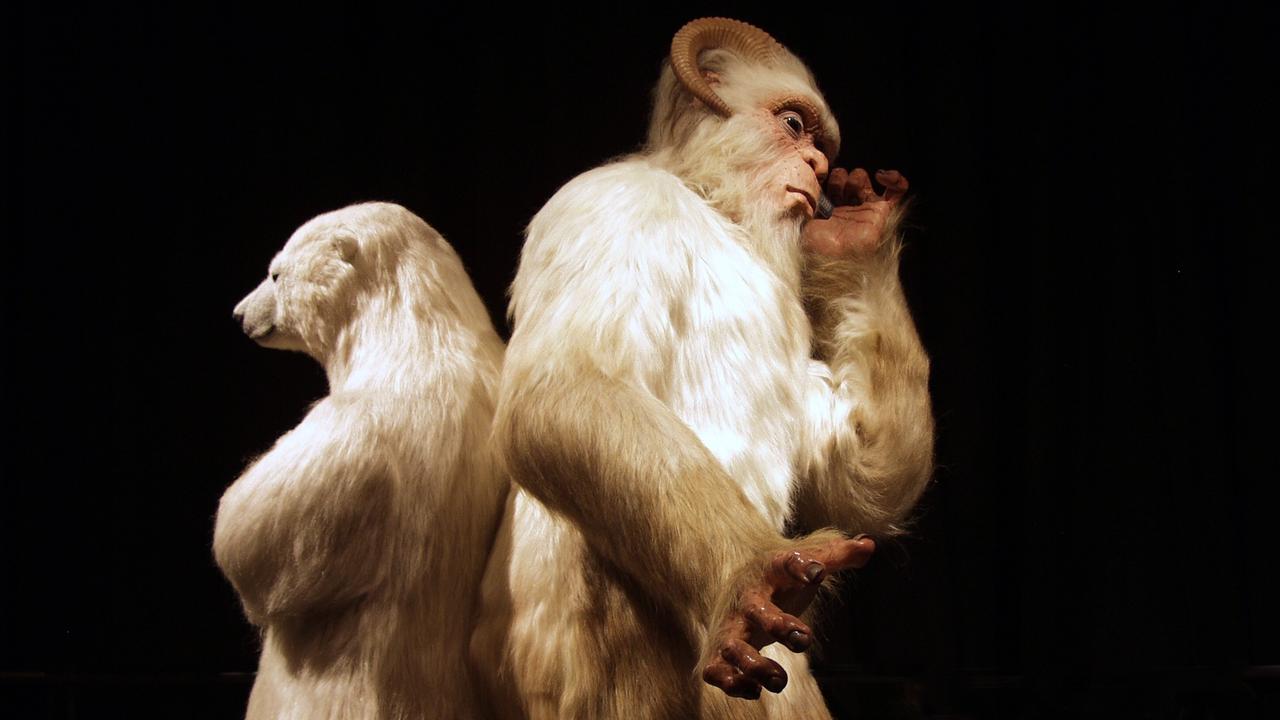 No one has ever taken a photo of a Yeti, but this is what one could look like, seen here with a model of a polar bear at Scienceworks, Victoria.

Soldiers on an expedition in Nepal have found large footprints in the snow they believed to belong to the Yeti, or Abominable Snowman*.

The Indian army posted the photos on social media and said its soldiers had seen the footprints close to a camp near Mount Makalu on April 9.

The footprints measured 81cm by 38cm. What look to be large footprints are seen in the snow, sighted by the Indian soldiers, near the Makalu Base Camp in the Himalayas. Picture: AFP

The Yeti is a part of Nepalese folklore* and is said to live high in the snow-capped Himalayas.

Most scientists don’t believe it exists.

In a post on Twitter, the Indian army wrote: “For the first time, an #IndianArmy Mountaineering Expedition Team has sited Mysterious Footprints of mythical beast ‘Yeti’”.

The post did not explain how a mythical creature could leave footprints.

Mount Makalu is the fifth highest mountain in the world and is on the border between Nepal and Tibet, a region of China. It is part of the mountain range called the Himalayas.

Mount Makalu stands near the Makalu-Barun valley, a remote wilderness that has been surveyed by researchers hunting for the Yeti.

Daniel C. Taylor, who has explored the Makalu-Barun area and written a book on the mystery of the Yeti, said the footprints were likely those of bears.

“If that is the footprint of an animal or a single animal, it’s the size of a dinosaur,” he told news agency Reuters, adding that more measurements of the footprints were needed to know for sure what animal they were made by.

“One needs to really confirm those measurements of the footprint size because we know for sure that there are no dinosaurs living in the Barun valley.”

Tales of a wild hairy beast roaming the Himalayas have interested climbers in the Himalayas since people began trying to climb Mount Everest in the 1920s.

In 2008, Japanese climbers returning from a mountain in western Nepal told Reuters they had seen footprints, which they thought belonged to the Yeti.

Though they carried long-lens cameras, video cameras and telescopes, they didn’t take any photographs of the creature.

Scientists have found little evidence of the Yeti’s existence so far.

In 2017, a group of international researchers studied multiple samples (including bones and hair) people hoped were from the Yeti that had been collected from across the Himalayan region. They concluded the samples belonged to bears. Son of Bigfoot is a 2017 moving in which a boy travels to find his father, only to find he is actually Bigfoot, a creature that features in North American folklore.

BIGFOOT
In North American indigenous folklore, there is a big, hairy creature called Bigfoot or Sasquatch that is said to live in the wilderness.

People who claim to have seen the creature have described it as between 1.8-2.7m tall and covered in either black, brown or reddish hair.

In 2008, two men said they had found the remains of a half-man, half-ape in the woods of the US state of Georgia they suggested could have belonged to Bigfoot. The remains were tested and revealed to be a rubber gorilla suit.

The men owned an online business selling Bigfoot souvenirs and their sales increased dramatically after their find. A sketch by artist Buck Buckingham based on witness descriptions of the Yowie, a creature thought by some to live in Australia.

YOWIE
There is a long list of scary, monstrous creatures in Australia’s indigenous folklore.

One creature often compared to the Yeti or Bigfoot is the Yowie, regarded as a creature of the outback.

The first reported sighting of a Yowie by a non-Aboriginal person was in Sydney in 1790 and there have been frequent reports of sightings all over Australia ever since.

Quest to bring woolly mammoth back to life

CLASSROOM ACTIVITIES
1. Write a story
Write a scary or mysterious story that starts with: “Would anyone believe that I saw a real, live Yeti?”

2. Extension
Do you think that the Indian army really did find a Yeti footprint? List all of the reasons or evidence in the story that helped you to decide your answer.

VCOP ACTIVITY
Using the attached 6 grid template, come up with 6 questions stems* for your grid. Then with a partner and a dice, see how many questions you can verbally create for the soldiers about their discovery. Roll the dice and whatever number it lands on, correlates to a question stem on your grid. Use that question stem to start your question. What other way can you use the 6 grid?

Question stems are the first word you can use to start a question sentence, for example: who, when, how etc.

HAVE YOUR SAY: Do you think the Yeti, Bigfoot or Yowie are real?
No one-word answers. Use full sentences to explain your thinking. No comments will be published until approved by editors.