Professor Michael Mahony holds a green and golden bell frog as research assistant Rebecca Sceto looks on inside a laboratory at the University of Newcastle. Picture: Reuters

Wading through a moonlit pond on Australia’s east coast talking to frogs makes Michael Mahony feel like a kid again.

The 70-year-old biology professor and conservationist at the University of Newcastle has mastered imitating and understanding the shrills, croaks and whistles of frogs.

“Sometimes you forget to work because, you know, you just want to talk to the frogs for a while and it’s sort of good fun,” said Professor Mahony from a pond in Cooranbong, NSW.

He is thrilled every time they call back, but fears frogs are increasingly at risk of going silent.

Australia has about 240 frog species, but about 30 per cent of them are threatened by climate change, water pollution, habitat loss, a disease caused by chytrid fungus*, and in a variety of other ways.

Professor Mahony said frogs were the most threatened of all vertebrates* around the world.

Over his career, Professor Mahony has described 15 new species of frogs. He has also seen some wiped out.

“Probably the saddest part of my career is that as a young person, I discovered a frog and within two years of it being discovered that frog went extinct,” Professor Mahony said.

“So very early in my career I became aware just how vulnerable* some of our frogs were. We need to be looking at our habitats and asking what is wrong.” A frog sticks to the inside wall of a container in a laboratory at the University of Newcastle. Picture: Reuters

Beyond working to preserve amphibian* habitats across Australia, Professor Mahony has helped to develop a cryopreservation* method to help bring frogs back from the edge of extinction by “banking” genetic material*.

“What we’ve done in the face of the problems of catastrophic* loss of species is to establish the first genome bank* for Australian frogs,” he said.

Professor Mahony has also contributed to a study by the World Wide Fund for Nature that found almost three billion Australian animals were killed or displaced by bushfires in 2019 and 2020, including 51 million frogs. Professor Michael Mahony and his team of field assistants search for frogs at a pond in Cooranbong, NSW. Picture: Reuters

Professor Mahony’s passion for conservation has also rubbed off on his students. One of them, Simon Clulow, named a newly discovered frog “Mahony’s Toadlet” in his honour in 2016.

Some students have also taken up his technique of calling and talking to frogs.

“I’ve never been into yelling at them to find out where they are,” said University of Newcastle doctoral student and frog researcher Samantha Wallace.

“But it definitely does work, so it does pay back, especially when you’re trying to find some of these species that are really among the undergrowth and they’re not really obvious.” 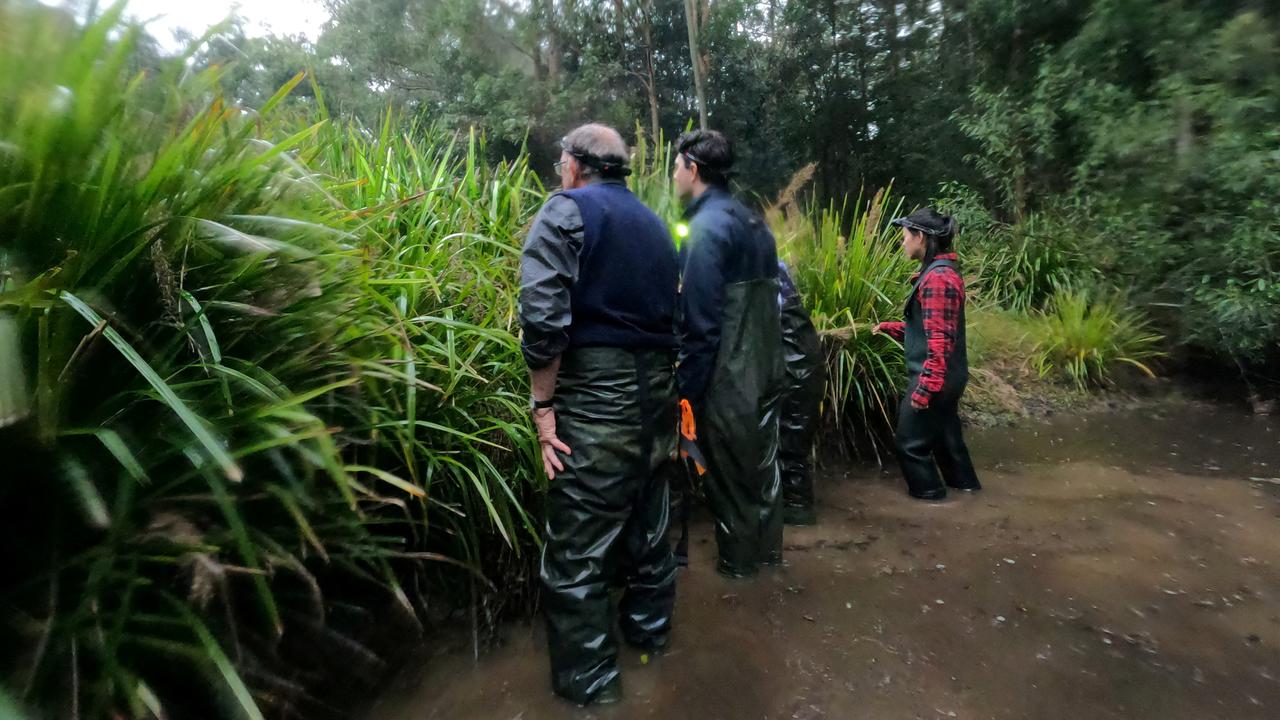 CLASSROOM ACTIVITIES
1. Describe an Aussie frog
Australia has about 240 frog species – choose one to research and then write a description of what you would see if you found one in the wild. Your writing should describe the frog as well as the habitat in which you would find it. Perhaps you can even find out what sounds it makes and include that in your description too!

2. Extension
Draw a diagram of a frog life cycle.