The huntsman spider holding on to the pygmy possum at Mt Field, Tasmania. Picture: Facebook/Justine Latton

A giant spider terrified tourists by eating a possum on the wall of their cabin in Tasmania.

Justine Latton and her husband were staying at Mt Field National Park when they witnessed the enormous huntsman spider dining on the marsupial*.

“Possum-eating spider!” she later wrote on Facebook above the jaw-dropping images taken by her husband.

Pygmy possums’ bodies are at least 6.5cm long, which is roughly the same size as a large huntsman’s body.

However, the massive creepy crawler’s leg span can grow to more than 15cm.

Ms Latton’s online post was shared around the world within hours. 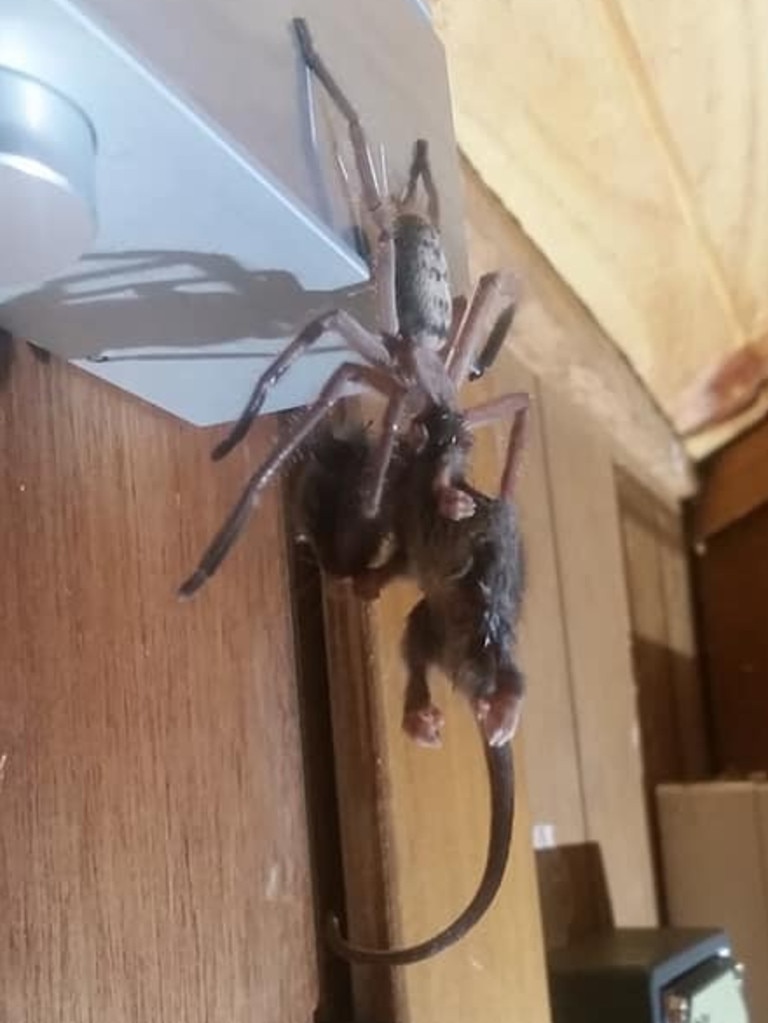 The huntsman spider with the pygmy possum. Picture: Facebook/Justine Latton

“It would be fairly rare,” he told the Guardian newspaper “It’s the first time I’ve seen a pygmy possum as prey*.”

He added it was more common to see a huntsman eat small birds, frogs and geckos.

There are two species of pygmy possums in Tasmania, the little pygmy and the eastern pygmy. 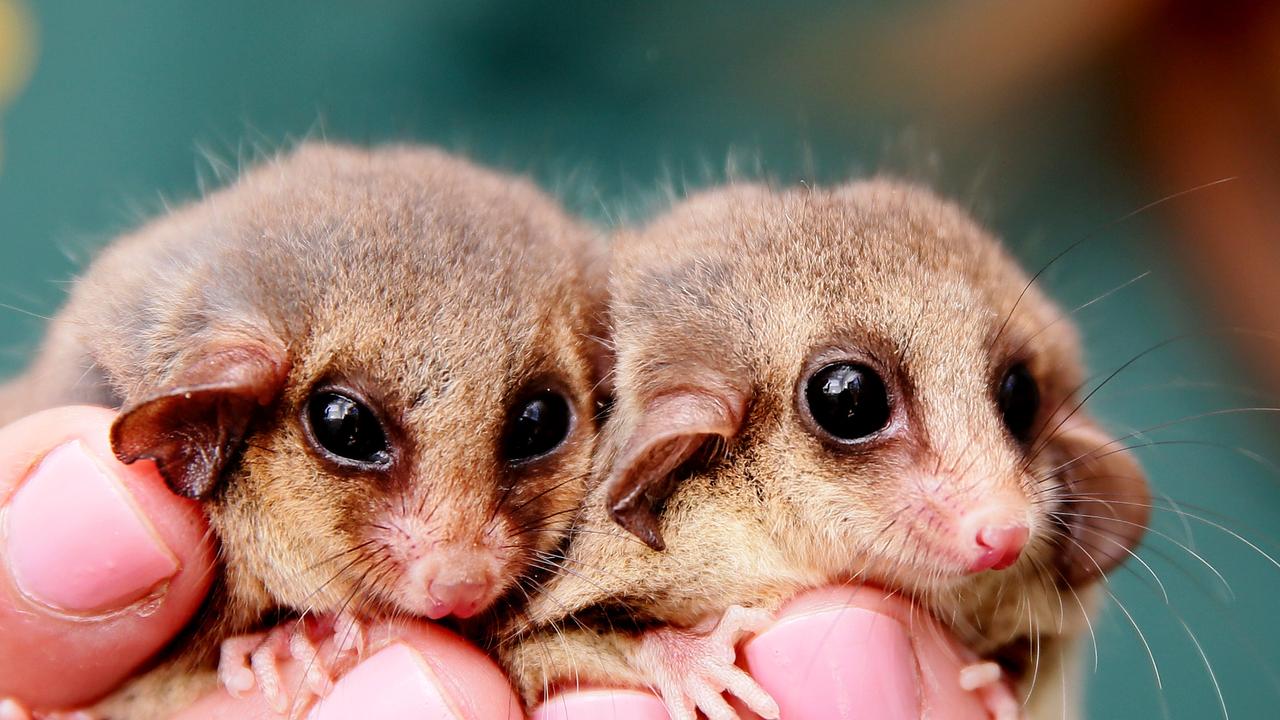 The little pygmy possum is the smallest of all possums and grows to only 6.5cm body length.

The eastern pygmy can grow to about 7cm-11cm body length and is more often found in alpine* and subalpine* habitats* such as those at Mt Field. Nature lovers were impressed by the photos.

Robyn Gates wrote: “If the pygmy was just cold it would be an easy target and the spider may just drink the digestible liquids* of the possum.”

Julie Southwell suggested the pygmy possum was already dead when the spider found it.

She wrote: “Just sad as the pygmy possums like so many creatures are struggling. I don’t begrudge* the Huntsman its meal, he or she needs to survive.”

Brendon McIntyre added: “That is a damn big Huntsman and quite death-defying to hang off the wall like this while holding onto dinner.”

The world loves photos of Australia’s massive huntsman spiders doing weird things. During a heatwave in January, a huntsman was photographed cooling down by crawling over a woman’s hand as she held an icy bottle of beer.

And in October 2016, a huntsman in Queensland was filmed dragging a dead mouse up the side of a fridge.

The thought of a spider so big it can carry mice and possums makes most people squirm, but the monster arachnids* are not deadly to humans.

If you do see one, don’t touch it as a huntsman’s bite can cause pain and swelling and you can’t be sure exactly what species of spider it is.

This story originally appeared in The Sun and was republished here with permission.

Some people call them tarantula or giant crab spiders.

There are 94 described species in Australia. 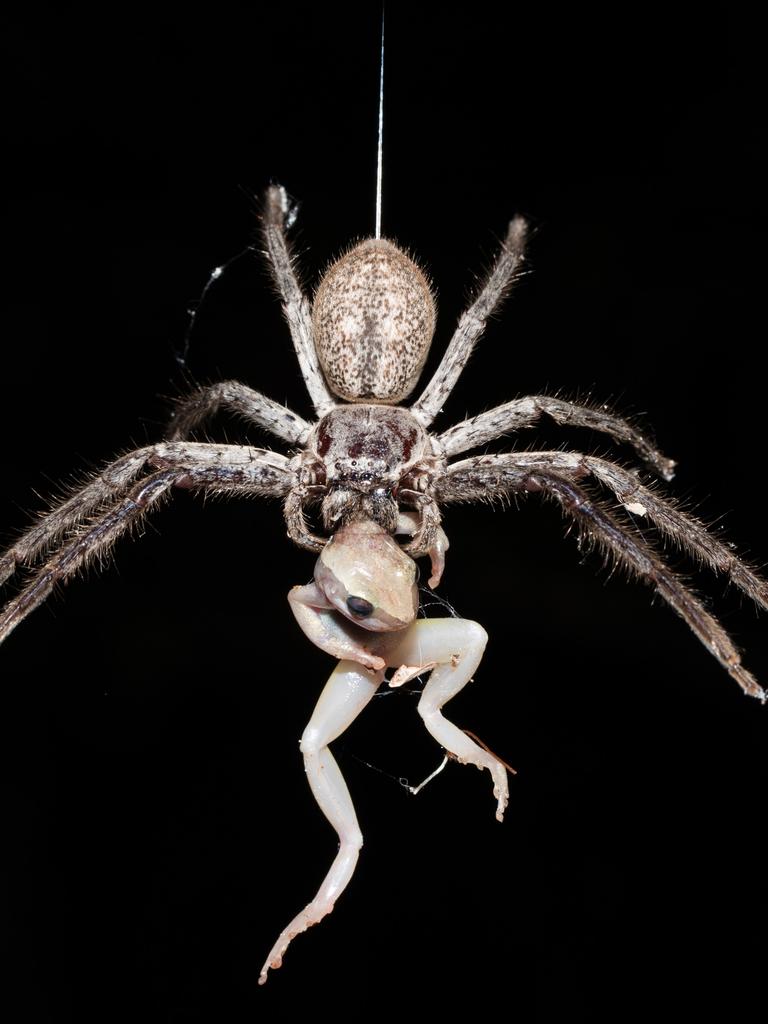 Instead of making a web, they live in nooks and crannies, such as under bark or in a hole in a tree. They are peridomestic, which means they live around humans, such as in our houses, sheds and wood piles. Other peridomestic animals are rats and mice.

To reproduce, they make a white sac full of up to 200 eggs.

As young huntsman grow, it sheds its skin several times.

Most live for two or more years.

Many other huntsman species live across Asia, Africa, the Americas and the Mediterranean.

1. Write the Story
Rewrite this story from the spider’s point of view.

2. Extension
Why do you think so many people love scary or creepy pictures like these? Write a paragraph explaining your opinion on this question.

HAVE YOUR SAY: How would you feel if a huntsman did this in your cabin on holiday? Would you be fascinated, feel squirmy or both?
No one-word answers. Use full sentences to explain your thinking. No comments will be published until approved by editors.