Mammoth task ahead for ‘de-extinction’ scientists Woolly mammoths died out about 4000 years ago, but now scientists are keen to bring them back to life in a hybrid genetics experiment with Asian elephants. Picture: Discovery Science Channel

Ever wondered if an extinct species could be resurrected*? One bioscience firm has insisted they can, announcing Monday its plan to use emerging technology to restore the woolly mammoth to the Arctic tundra*.

Capitalising* on a partnership with a Harvard geneticist*, new US company Colossal said its species “de-extinction” effort could lead to a working model for restoring damaged or lost ecosystems, potentially helping slow or even halt the effects of climate change.

“Never before has humanity been able to harness the power of this technology to rebuild ecosystems, heal our Earth and preserve its future through the repopulation of extinct animals,” Colossal chief executive and co-founder Ben Lamm said in a statement.

“In addition to bringing back ancient extinct species like the woolly mammoth, we will be able to leverage* our technologies to help preserve critically endangered species that are on the verge of extinction and restore animals where humankind had a hand in their demise*.” 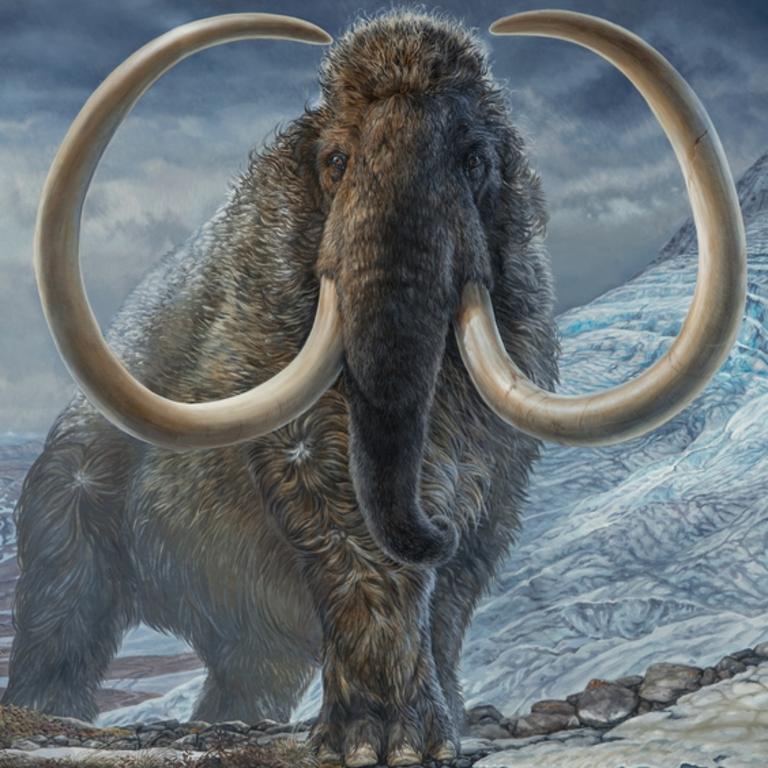 An illustration of an adult male woolly mammoth navigating a mountain pass in Arctic Alaska some 17,100 years ago. The image was reproduced from an original, life-size painting by paleo artist James Havens housed at the University of Alaska Museum of the North.

Woolly mammoths roamed much of the Arctic, and coexisted with early humans who hunted the cold-resistant herbivores* for food and used its tusks and bones as tools.

The animals died out about 4000 years ago. For decades, scientists have been recovering bits and pieces of mammoth tusks, bones, teeth and hair to extract and try to sequence the mammoth’s DNA.

Company co-founder Professor George Church is a renowned geneticist and professor of genetics at Harvard Medical School, who is using pioneering techniques to advance species de-extinction.

“Technologies discovered in pursuit of this grand vision – a living, walking proxy of a woolly mammoth – could create very significant opportunities in conservation and beyond,” Professor Church said in the statement.

Colossal said restoring the beasts had the potential to revitalise the Arctic grasslands, a vast region with major climate change-combating properties, such as carbon sequestering* and methane suppression*. Even though this Asian elephant at Melbourne Zoo has to find ways to keep cool in the hot weather, its DNA makeup is 99.6 per cent similar to the former Arctic-dwelling woolly mammoth.

Colossal is funded in part through US $15 million in funding from investors and said its advisers include leaders in bioethics and genomics.

But critics said the money could be better used to save endangered animals and address the root causes of extinction.

Associate Professor Jeremy Austin, an evolutionary* biologist from the Australian Centre for Ancient DNA at the University of Adelaide, told the ABC that the millions of dollars raised for de-extinction projects could be put to better use.

“It’s a ridiculous waste of money to try and reconstruct the genome of an extinct animal or plant and attempt to bring it back to life when other species are slipping through our fingers almost on a daily basis,” A/Professor Austin said.

“The amount of money and resources used to even attempt to bring one species back from extinction could be used to save … possibly tens of threatened species from actually going extinct themselves.”

The ABC report includes a Department of Agriculture estimate that there are already more than 400 animal species that are threatened or extinct in Australia.

Scientists have proposed bringing some of them, like the thylacine, back by using similar technology proposed by Colossal. Scientific ambitions to bring back extinct animals are not new – the thylacine, Australia’s extinct Tasmanian tiger, is just one animal that has been considered a candidate for resurrection. This mounted thylacine specimen is a 1981 mixed media sculpture by Alan Sonfist.

“Trying to resurrect these extinct species does give us more information about the genetics of species,” he said.

But Professor Ritchie said that causes of extinction also need to be remedied.

“If it was possible to resurrect recently extinct species and care for them better in their environments, then I think that’s a worthwhile thing (to do), but not if we’re going to continue business as usual,” he said.

“We do need to change our ways that are causing so many extinctions, and things are still continuing to get worse.” There is also doubt about whether mammoths or other extinct species could survive in modern environments.

A/Professor Austin said it was either humans or habitat destruction that caused their extinction in the first place.

“You don’t have to be a highly trained scientist to know that the Arctic, in general, is suffering terribly due to climate change,” he said.

“What are you going to do with a pair of woolly mammoths, apart from put them in a zoo and charge people large amounts of money to come and look at them?”

CLASSROOM ACTIVITIES
1. For and against
In this news story, we are presented with differing views from experts about whether bringing woolly mammoths back from extinction is a good idea. Create a table with two columns and head the columns “For” and “Against”. On your table, record the names and job title of the experts for each side of the argument and a brief summary of the reasons they give for and against the idea.

2. Extension
Based on the for and against arguments you have listed, what do you think? Explain why you think woolly mammoths should or should not be brought back from extinction. Give reasons for your point of view.

VCOP ACTIVITY
Imaginative Dialogue
Imagine you were there during the event being discussed in the article, or for the interview. Create a conversation between two characters from the article – you may need or want to include yourself as one of the characters. Don’t forget to try and use facts and details from the article to help make your dialogue as realistic as possible.