Kids like Sam, 4, who is pictured with a lifelike baby triceratops puppet, can use International Dinosaur Day to learn more about the creatures. Picture: David Caird

With the world’s most complete and well-preserved triceratops now calling Australia home, there’s never been a better time to celebrate International Dinosaur Day.

Observed twice each year, on June 1 and also the third Tuesday of May, Dinosaur Day is all about learning more about the fascinating creatures that roamed Earth hundreds of millions of years ago.

So to mark the occasion, Melbourne palaeontologist* Erich Fitzgerald has shared some of his favourite dinosaur facts with Kids News in an exclusive video.

Dr Fitzgerald helped bring the 67 million-year-old triceratops fossil, named Horridus, from Montana in the US to the Melbourne Museum, where it has been on display for the public since March.

Museums Victoria paid $3 million for Horridus’s 266 bones, which make up a significant 85 per cent of the total skeleton and weigh more than a tonne, or 1000kg.

“Triceratops is one of the all-time classic dinosaurs,” Dr Fitzgerald said.

“If there was the Fossils, Bones and Rocks Hall of Fame, triceratops is in the top two, along with tyrannosaurus rex. Dr Erich Fitzgerald says triceratops would easily make it into the Fossils, Bones and Rocks Hall of Fame. Horridus is on show at Melbourne Museum. Picture: Eugene Hyland

“Horridus is without doubt the most complete and most spectacularly preserved real dinosaur fossil … ever put on display, and to find a permanent home in Australia.

“Not only that, it is currently the most complete triceratops skeleton ever found on our planet.”

“These long-lost animals can seem larger than life, and as such capture the imagination of both young and old,” Dr Rule said.

“The science of palaeontology is going through a golden age*, with dinosaur discoveries happening every day. More than 1000 dinosaur species have been named so far.

“And despite more than 66 million years separating us from dinosaurs, science can now tell us how dinosaurs once lived.” 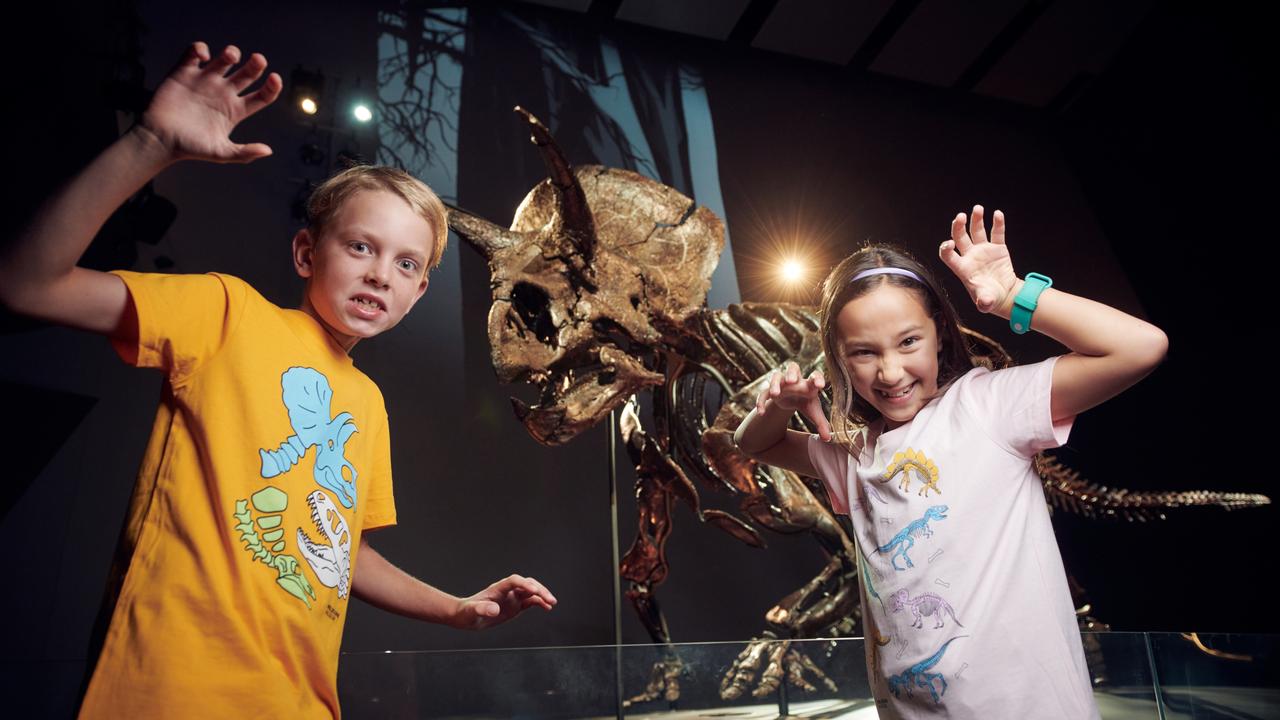 Dr Rule said one of the key lessons dinosaurs taught us was that “the animals we share our world with are not permanent”.

“Even though they existed for 165 million years, all the non-bird dinosaurs are now extinct,” he said.

“Dinosaurs and palaeontology are now more important than ever as they can teach us about the need to conserve the animals we have around today.”

Young history buffs and wannabe* palaeontologists can see Horridus at Melbourne Museum, and learn more about dinosaurs by watching Triceratops TV for kids on the museum’s website, museumsvictoria.com.au

You can also download a special triceratops poster below.

Triceratops coming to live in Australia

CLASSROOM ACTIVITIES
1. Lessons from the dinosaurs
Write an open letter to the dinosaurs thanking them for the lessons they have taught us 66 million years on.

What have they taught us as humans?

Why are we so fascinated by them?

How can we ensure our current animal species survive long into the future?

2. Extension
After watching the video from the article, share three key or interesting facts you learned about dinosaurs.

VCOP ACTIVITY
Fact finder
Select two facts about dinosaurs that you have learnt from reading the article or watching the video in this story.

In your first fact, extend your answer by using the word “because” to explain.

In your second fact, see if you can start with the opener “Surprisingly”.

How are you going to celebrate International Dinosaur Day?