But this juvenile* female is a furry bundle of hope that koala populations may be able to eventually recover from the bushfires that have destroyed large areas of critical* breeding habitat along the mid-north coast of NSW.

Between 250 and 350 koalas are believed to have died and it will take at least 30 years to restore the area’s breeding population to pre-fire numbers, said Cheyne Flanagan, clinical* director of Port Macquarie Koala Hospital.

The hospital is caring for 12 koalas brought in from fire grounds, all of whom are under five years old, including Anwen.

“We found her about six days after the fire and like all the animals she was incredibly dehydrated,” Ms Flanagan said.

The hospital team, which includes 150 volunteer carers, spent a day syringing electrolyte fluids into Anwen’s mouth, which helps her to rehydrate*, while she rested in her “five-star hotel”: A laundry basket with a pillow, a fluffy towel and another laundry basket on top to make a cosy house.

The next day Anwen went under a general anaesthetic* to have her burns cleaned, dead flesh trimmed away and burns dressings and creams applied before being bandaged up.

“It’d be ideal to change the bandages every day but you can’t do it to them because they need a general anaesthetic every time,” Ms Flanagan said. 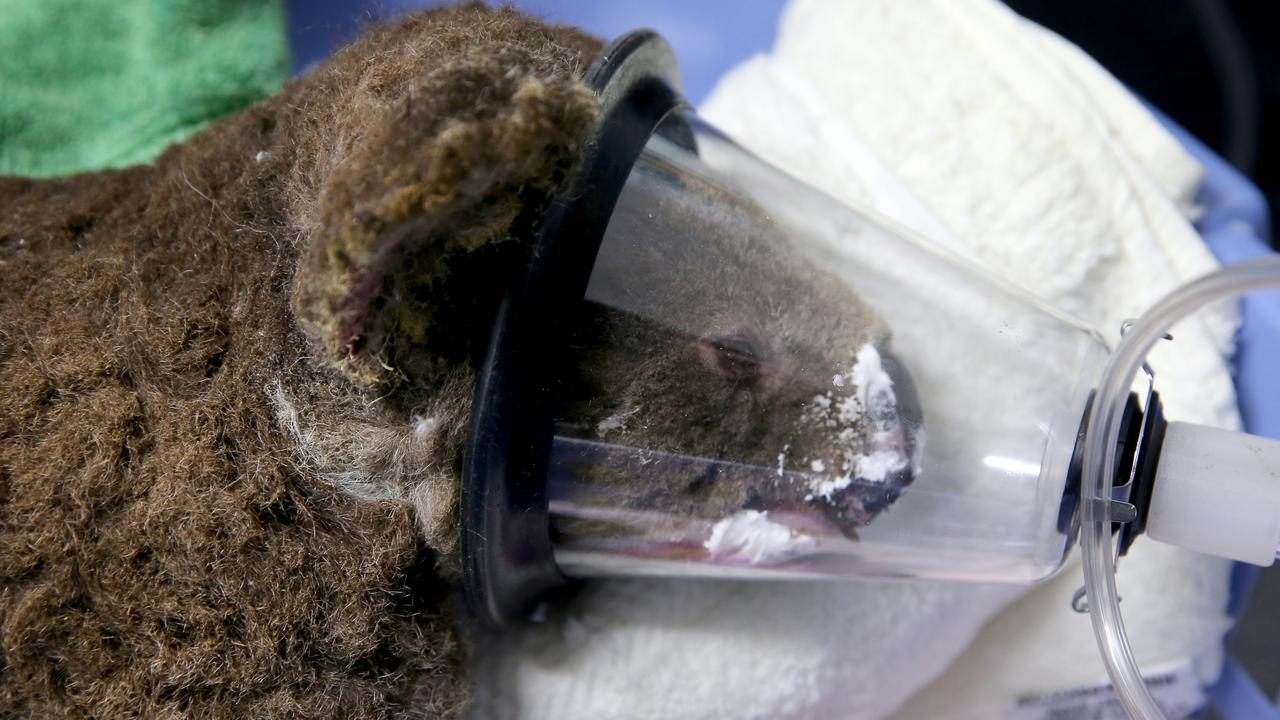 Anwen with a face mask on so she breathes in anaesthetic to make her unconscious and not hurt or distressed while her dressings are changed. Picture: Nathan Edwards. Anwen being checked and treated by staff at the hospital. Picture: Nathan Edwards. Treatment complete, Anwen is carried back to her laundry-basket bed to sleep until the anaesthetic wears off. Picture: Nathan Edwards

Anwen is named after local girl Anwen Pullen, 8, who, with her sister Elsie, 6, has been baking brownies for volunteers at the hospital.

As Anwen the koala snoozed in her laundry basket home, where she’ll stay until she’s completely healed and the experts can find a safe patch of bush to return her to, the hospital took delivery of the first of a new innovation* to help the population recover: custom-made automatic drinking stations.

These are elevated water tanks with waist-high and ground-level water dishes enclosed in mesh, allowing koalas, goannas, birds and frogs to rehydrate while staying safe from cats, foxes and other predators.

The hospital has launched a GoFundMe page to raise $25,000 to buy more stations.

Searchers are still going into smouldering* fire grounds to look for surviving koalas, and during the week found a miraculously unburnt patch of bush in a fireground close to The Ruins Way near Port Macquarie.

“The really awful part is they found a section of unburnt country and there were mothers and joeys in the trees,” Ms Flanagan said.

“They thought it looked safe so they left them. On Thursday afternoon that’s what went up, so all that has to be researched.” ‘NOAH’S ARK’ BUS
At Yeppoon, in central Queensland, staff and volunteers at a local wildlife sanctuary evacuated more than 150 animals by bus on Saturday night.

It was a modern-day version of the Christian bible story of Noah saving animals from flood.

Cooberrie Park Wildlife Sanctuary ranger Kieron Smedley told ABC the evacuation began at 9.30pm and finished at 2.30am, with volunteers using their phones to light the way.

“We have a bus on site specifically designed to evacuate animals,” he told ABC.

“We evacuated more than 150 animals and that included everything from koalas, to monkeys, to crocodiles, to a wide variety of birds, reptiles — everything you could imagine.

The fire front passed and the animals were able to return to the sanctuary on Monday. Cooberrie Wildlife Sanctuary evacuated more than 150 animals, including crocodiles and some much smaller, more furry animals. This female sugar glider is one of the residents. Picture: supplied

2. Extension
Local Hero awards are given each Australia Day. This award recognises Australians who have made extraordinary contributions to their local community. People write letters to nominate people or organisations who they think deserve this very special award. Choose one of the people or organisations in today’s story. Write a letter explaining why they should be in the running for Australia’s Local Hero award this year.

VCOP ACTIVITY
Thank You!
Write a letter to either the wildlife volunteers, the firefighters, the baking team or 8-year-old Anwen and her 6-year-old sister Elsie.
It’s times like this, when Australia is in devastation, that we need to support those acts of kindness that help all those in need.

Maybe as a class you can write letters to everyone involved.

Think about if your family was effected, what would you want to say to the people helping out?

HAVE YOUR SAY: What sick or injured animals would you most like to care for?
No one-word answers. Use full sentences to explain your thinking. No comments will be published until approved by editors.