King Penguin populations in Antarctica are on the brink of extinction.

Rising temperatures caused by climate change have Antarctica’s king penguin populations on the edge of extinction*, according to a new study.

The study, published in the journal Nature Climate Change, predicted that if climate change continues as expected, 70 per cent of today’s 1.1 million king penguin breeding pairs would suddenly relocate or disappear before the end of the century.

Flightless king penguins are the second largest species of penguin, after the emperor. King Penguins from the Possession Island in the Crozet archipelago. Global warming is on track to wipe out 70 per cent of the world’s King penguins by century’s end, Picture: AFP / CNRS/IPEV/CSM/Celine Le Bohec

They breed only on particular isolated* islands – with no ice cover and easy access to the sea – in the Southern Ocean and can make round trips of more than 600km hunting for fish and krill* in the Antarctic waters, while their chicks fast* for up to a week at a time.

With warming oceans, the Antarctic polar front – a nutrient-rich area where water and krill rise up from the sea floor – is being pushed to the south.

It means the adult penguins have to travel farther away from their nests to look for food, leaving their offspring hungry for longer.

“They will need to either move somewhere else or they will just disappear,” said Emiliano Trucchi, one of the paper’s authors and an evolutionary biologist* at the University of Ferrara in Italy.

“The largest colonies* are on islands that will be too far from the source of food,” Mr Trucchi said. 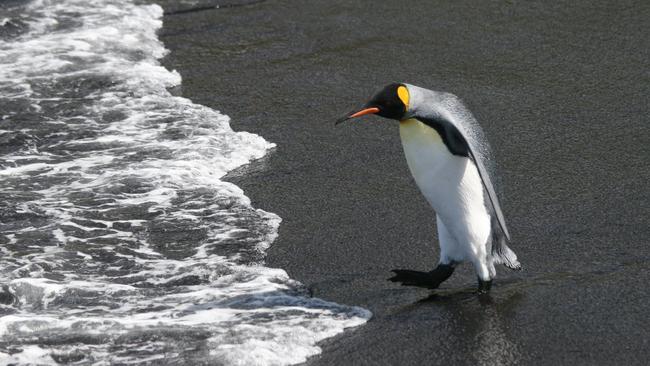 CLASSROOM ACTIVITIES
1. Write a sentence explaining what ‘extinction’ means
List the problems that might cause the Antarctica’s king penguins to become extinct.

IN ONE SENTENCE, TELL US WHAT YOU LIKE ABOUT TODAY’S STORY
Please do not use one-word answers. Explain what you enjoyed or found interesting in today’s article. Use lots of adjectives.