Kenyan elephant population up 12 per cent after poaching crackdown A new census has revealed a surge in elephant numbers in Kenya, following a concerted campaign against poaching. This pair of African elephants is strolling the savanna in the Kenyan Maasai Mara National Reserve. Picture: iStock

Elephant numbers in Kenya have grown by 12 per cent after a crackdown* on poachers*.

The first wildlife census* in the African nation has revealed a healthy rise in the elephant population since the height of its poaching crisis.

No creature was too great or small to count in the three-month quest on land and sea in the country’s 58 national parks and reserves and private and community conservancies*.

A crackdown on ivory* and horn hunters, plus harsher penalties*, was credited for the discovery of 36,280 elephants, up by 12 per cent since 2014, when poachers were hunting them in large numbers. The African elephant population in Kenyan has grown by 12 per cent, according to the country’s extensive animal census.

“The reduction in losses in terms of elephants, rhinos and other endangered* species is because of the great work that KWS (Kenya Wildlife Service) are doing,” President Uhuru Kenyatta said, urging his officers to find new ways to keep poaching at bay.

Researchers used planes, helicopters and boats, and studied camera trap footage and dung, for the audit of nearly 59 per cent of Kenya’s land mass that began in May. Lions, zebras, hirolas – also known as Hunter’s antelopes – and the three species of giraffe also increased in number, according to the state-funded study, which cost 250 million Kenyan shillings ($3 million). 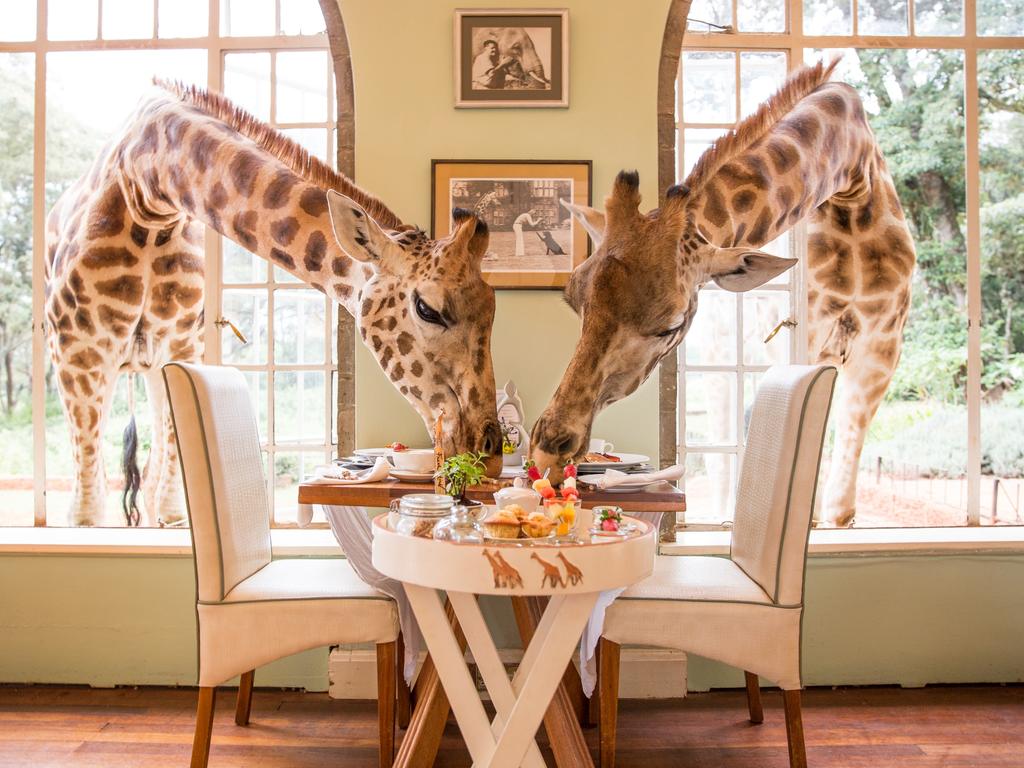 Breakfast with a difference at the Giraffe Manor, Kenya. The country’s animal census has found that three species of giraffe have increased in number.

However, some rare species of antelope, such as sable and mountain bongos, are at risk of extinction*, with evidence of fewer than 100 of each. Other concerns are Kenya’s growing human population and the rise in demand for land for settlement, plus the impact of grazing, logging and charcoal burning.

Travel restrictions imposed during the pandemic are also threatening to reverse gains made in conservation. Park fees, which help fund wildlife management, and millions of jobs, have been lost in Kenya and neighbouring countries, contributing to a rise in the hunting of animals for food. 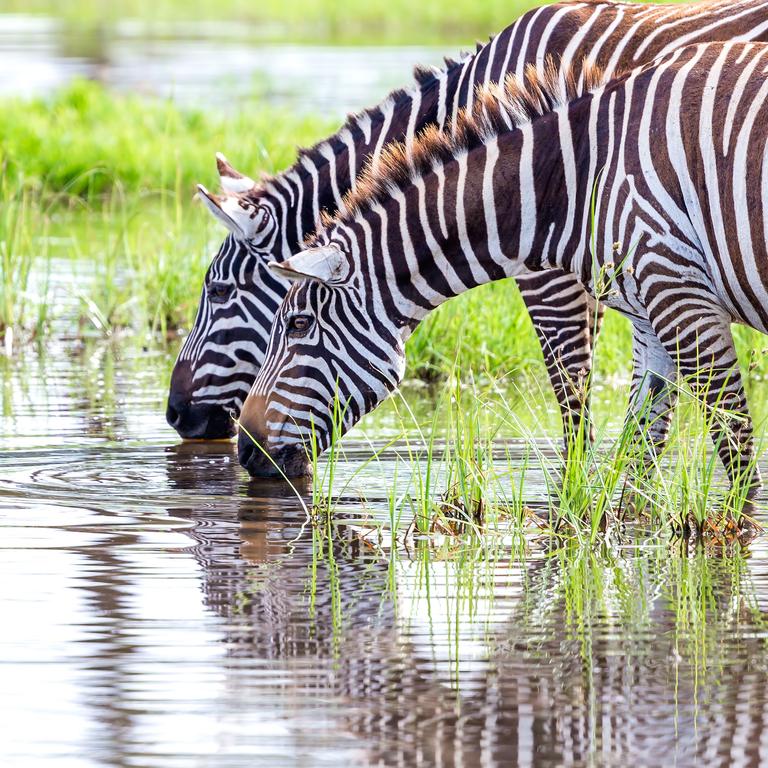 Zebras such as this pair pictured in Lake Nakuru National Reserve in Kenya, were also found to have increased in number. Picture: iStock

Africa’s elephants have been recognised recently as two separate species, one of them a step away from extinction. Forest and savanna elephants have been devastated by poaching and shrinking space, the International Union for Conservation of Nature reports in its latest red list of threatened species. The population of savanna elephants, found in Kenya and elsewhere, has plunged by at least 60 per cent in 50 years, prompting the union to reclassify* them from “vulnerable” to “endangered”.

Forest elephants are “critically endangered” after their numbers fell by more than 86 per cent in three decades. The next category is extinct. About 1.5 million elephants roamed the continent 50 years ago but a census in 2016 found only 415,000 left in the wild.

The move to separate Africa’s elephant species settles a debate that has engaged specialists for at least two decades. It follows fresh research into the genetics* of the populations. 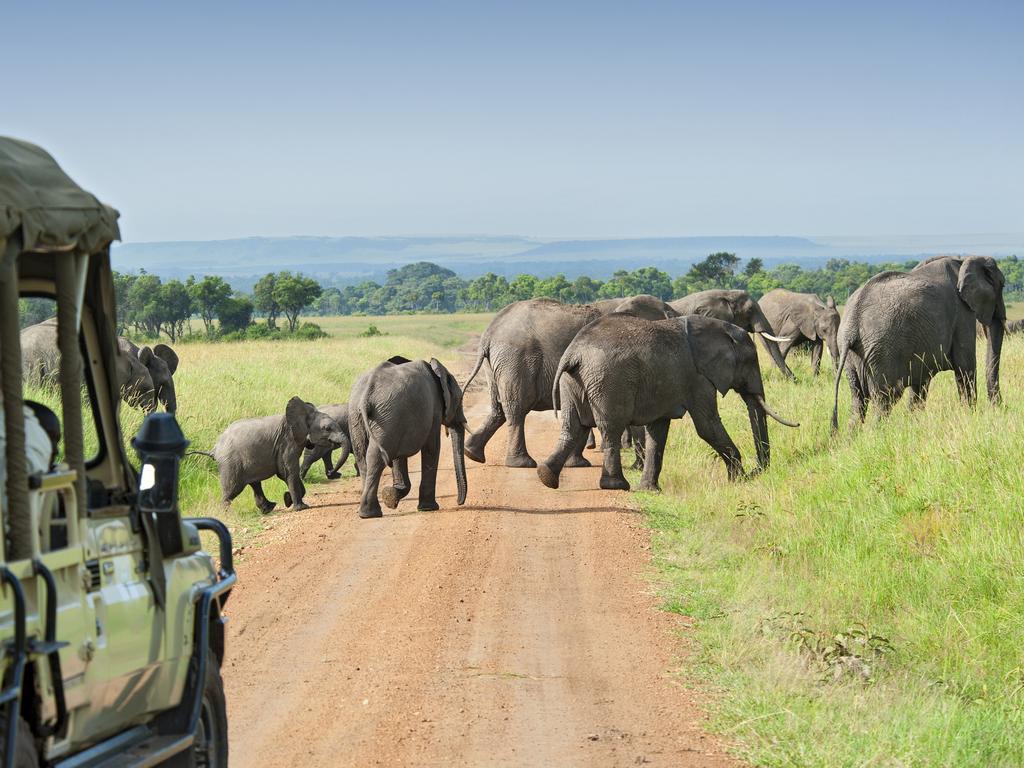 Safari cars are seen here following a large herd of African Elephants (Loxodonta) in the plains of the Masai Mara, Kenya. The reduced tourism caused by the Covid-19 pandemic has damaged conservation efforts as visitor passes help pay for anti-poaching resources.

Travel restrictions imposed during the pandemic are threatening to reverse gains made in conservation. Park fees, which help fund wildlife management, and millions of jobs, have been lost in Kenya and neighbouring countries, contributing to a rise in the hunting of animals for food. Picture: Getty Images.

Radioactive rhino horns to the rescue?

CLASSROOM ACTIVITIES
1. Animal protection
The increase in the elephant population in the recent count in Kenya is good news, but they are still an endangered species, meaning we need to make a huge effort to keep them safe and reproducing to keep them around for thousands of years to come.

Now list some possible ways to help eliminate or reduce the impact of these threats to keep their numbers increasing, not decreasing:

2. Extension
Explain what you think the reasons are for hunters to want to poach (the illegal trafficking and killing of wildlife) elephants in the wild? How can we, as humans trying to protect this species, try and reduce the want or need for hunters to do this?

VCOP ACTIVITY
Stretch your sentence
Find a “who” in the article – a person or an animal. Write it down.