A fossil jawbone peeking out from the Scottish shore has led scientists to discover a pterosaur* skeleton that shows these remarkable flying reptiles grew big tens of millions of years earlier than previously known. With a wingspan of about 2.5m, Dearc was the Jurassic’s largest-known pterosaur and the biggest flying inhabitant* of Earth to that point in time. Some pterosaurs during the subsequent Cretaceous Period grew much larger – as big as fighter jets. But Dearc shows that this scaling up had its origins much earlier.

Forensic* analysis of its bones indicated this Dearc individual was not fully grown and could have had a 3m wingspan as an adult. 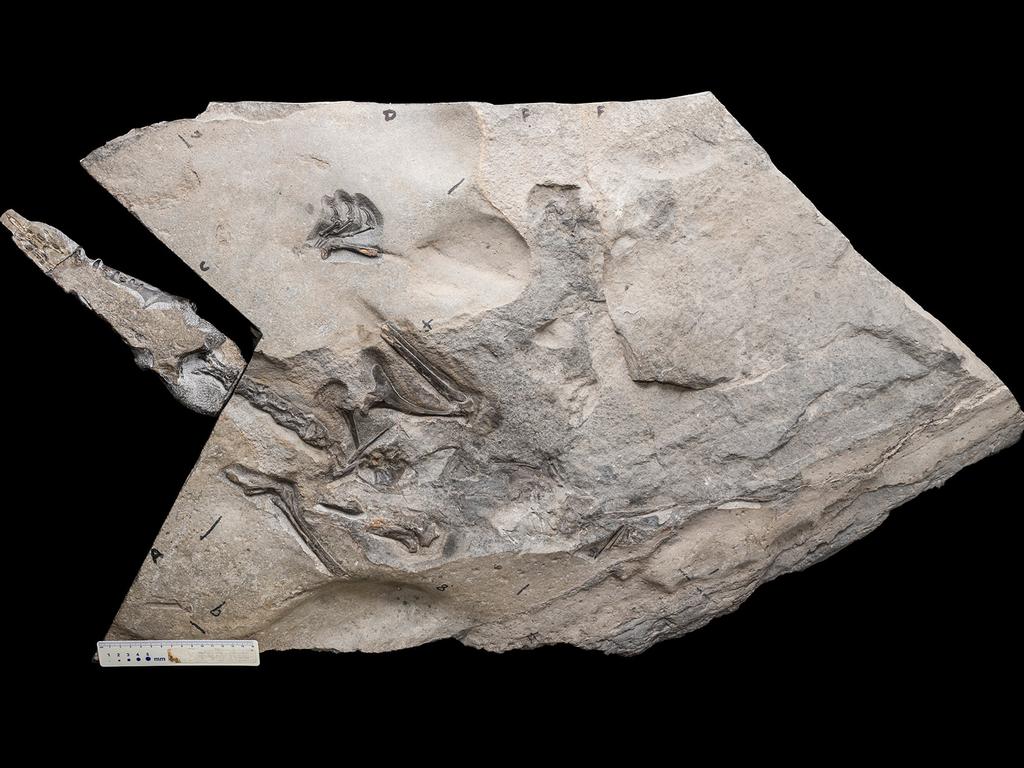 It had an elongated* skull and a long, stiff tail. An arsenal* of sharp teeth formed a cage when it bit down on prey.

Pterosaurs are some of the rarest vertebrates in the fossil record owing to their fragile bones, some with walls thinner than a sheet of paper.

“Our specimen, anomalously*, is well-preserved – retaining its original three dimensions and being almost complete, and still articulated* as it would be when alive. Such a state of preservation is exceptionally rare in pterosaurs,” Ms Jagielska said. This artist’s illustration shows the newly identified Jurassic Period flying reptile, or pterosaur, called ‘Dearc sgiathanach’, flying next to a large meat-eating dinosaur. Dearc represents the largest-known flying creature that had lived on Earth up to that point in time, roughly 170 million years ago. Picture: Natalia Jagielska

Up until when Dearc lived, pterosaurs generally had been modest in size, with many about the size of a seagull. The prevailing wisdom among scientists had been that pterosaurs did not reach Dearc’s size until some 25 million years later, appearing about 68 million years ago and boasting a wingspan of about 11m.

“In the Cretaceous, some pterosaurs got enormous, said University of Edinburgh palaeontologist and study co-author Dr Steve Brusatte. “These were some of the most superlative* animals that ever lived. Dearc was not close to them in size or grandeur, but it was 100 million years older. Evolution needed time to make such giants.” The discovery has challenged assumptions about when and why pterosaurs grew larger. Picture: Natalia Jagielska

In Dearc’s time, Britain was closer to the equator and existed as a series of smaller separate islands. Dearc lived alongside a menagerie* of plant-eating and meat-eating dinosaurs, early mammals and marine reptiles.

Dearc was discovered on the Isle of Skye in 2017, with the fossil jutting out from a limestone intertidal* zone after the tide had gone down.

“We were gobsmacked*,” Dr Brusatte said. “Nothing like this had ever been found in Scotland.” Researchers battled the tide, first using hammers and chisels and then diamond-tipped saws. But the tide interrupted before the skeleton could be fully extracted.

“The tide came in with a vengeance*, and we cried as the waves lapped over the fossil,” Dr Brusatte said. “We thought we lost it. But we decided to come back around midnight when the tide was down again, using our headlamps and flashlights. We were shocked and relieved to see the bones still there as the waves receded.”

CLASSROOM ACTIVITIES
1. Finish the story
What do you think the researchers did after the tide went out and they saw that the pterosaur had not washed away?

Write another paragraph for the end of the story. Your paragraph should describe what you think happened next in lots of detail.

2. Extension
Why is it so important to learn about these creatures who lived so long ago? Write a story for kids who are younger than you. The purpose of your story is to help them understand why this research is important.

VCOP ACTIVITY
Fossil hunting
Imagine a leisurely walk beside the cliff leading to a massive fossil discovery, then the incoming tide threatening its destruction before it could even be examined. Recount the events as if you were the researchers in Scotland.

Use short, sharp sentences intertwined with complex ones to replay the drama and emotions that would have unfolded.

Read aloud using a dramatic voice to see if you have captured the events in the best possible way. Edit and up-level your writing before sharing with a classmate.