It’s not science fiction! It’s the natural world going about its day-to-day life 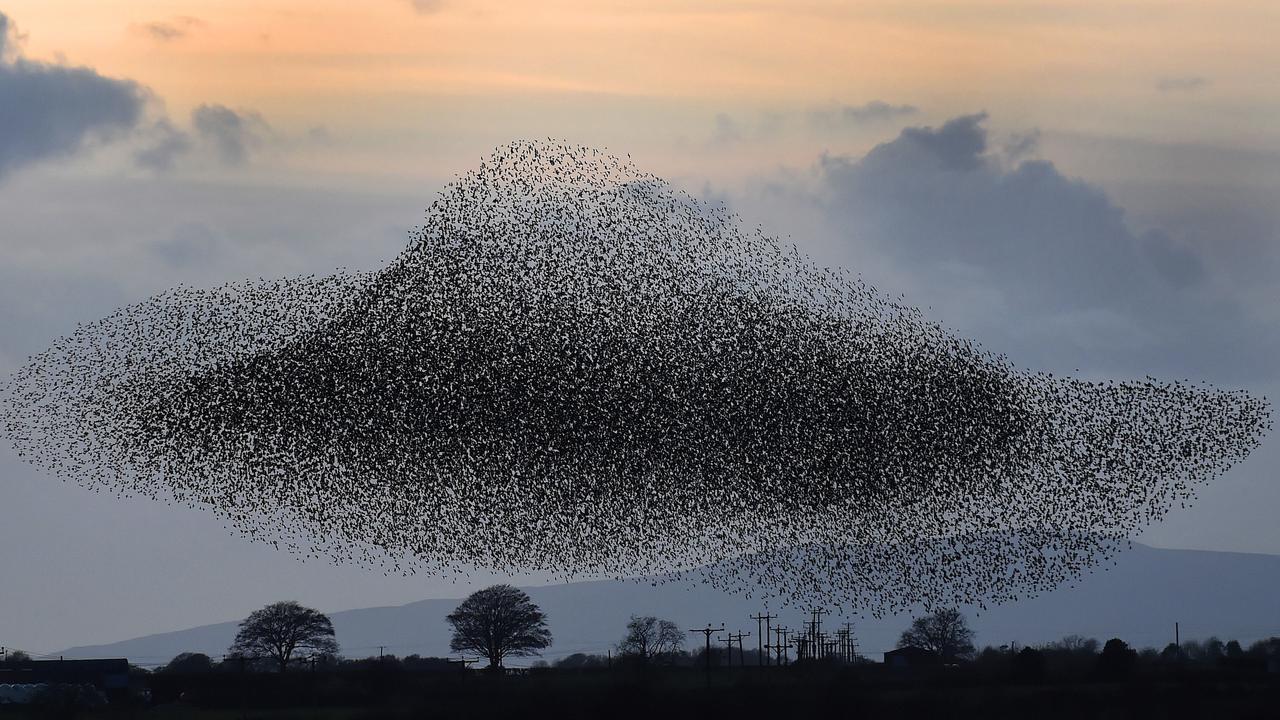 A murmuration of starlings put on a display near the town of Gretna, Scotland, UK. The starlings visit the area twice a year in the months of February and November. Picture: AP

Nature is beautiful, but it can also be weird, creepy and just a little bit spooky. It is always amazing.

We’ve compiled an incredible collection of photographs of nature at its weird, creepy, spooky and amazing best.

Which photo do you like? Which freaks you out, even just a little bit? Which would you like to know more about?

Kids News readers are terrific citizen scientists*, so if you know more about what’s going on in one of these photos or have seen something in nature just as amazing, share your knowledge in the comments section below.

ARMED ANEMONE
This alien-like creature found washed up on a beach in Broome, Western Australia, is an armed anemone, flipped over. It’s one of the largest species of anemone and can grow to 20cm in diameter, with tentacles 50cm long. GIANT GOLDEN-CROWNED FLYING FOX
This photo taken in the Philippines is thought to be of a giant golden-crowned flying fox, an endangered species and the largest bat species in the world. They can have a wingspan of 1.7m. No need to worry for your safety: they’re vegetarians and eat mostly fruit. 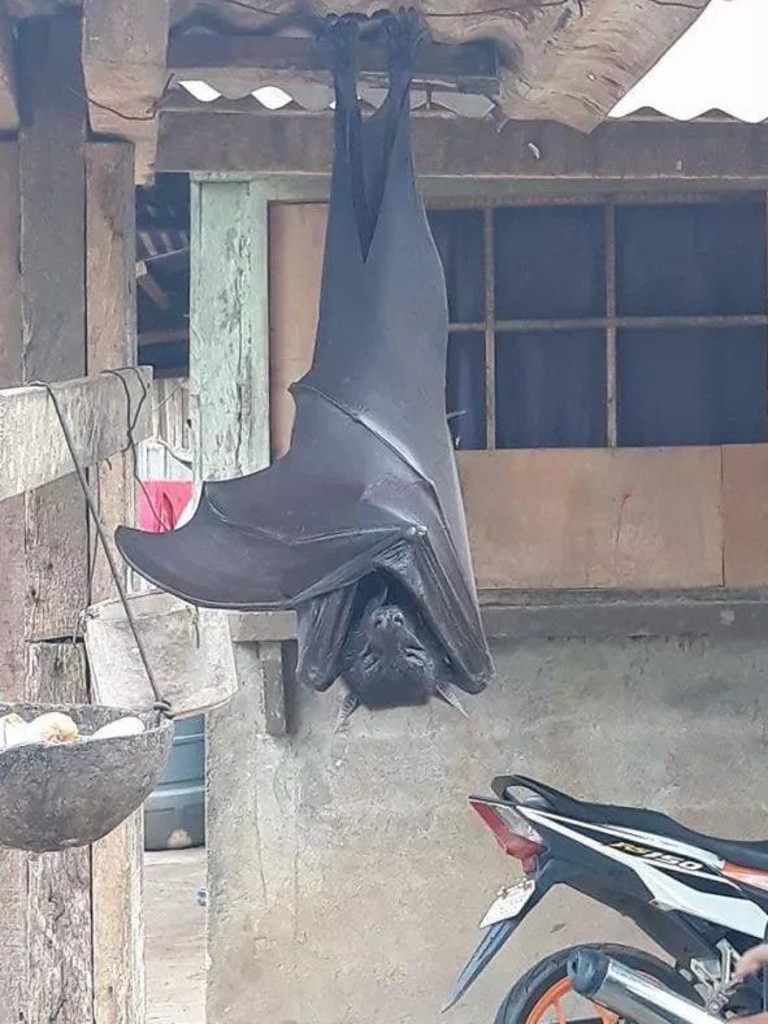 HUNTSMAN SPIDER
Australian huntsman spiders are huge! Some people call them giant crab spiders or wood spiders and others call then tarantulas, though they’re not a tarantula. Huntsman spiders are nonagressive but sometimes bite if guarding eggs. Their venom* is of low risk to humans. CANE TOADS AND A PYTHON
Clever cane toads hitched a ride on the back of a 3.5m python during a storm at Kununurra, WA, in December 2018. The image was posted on Twitter by Andrew Mock. Cane toads hitching a ride on the back of a 3.5m python. Picture: Andrew Mock

GECKO
We were a little worried for the spider at first glance, until we realised it was plastic. Now we’re wondering whether the gecko managed to get out okay. Can the gecko get out?

HEDGEHOG SKELETON
This hedgehog is long dead, but its spooky skeleton is well preserved inside the remains of its protective spiky coat. Hedgehogs of various species are native to parts of Europe, Asia and Africa and are not related to Australia’s echidnas. 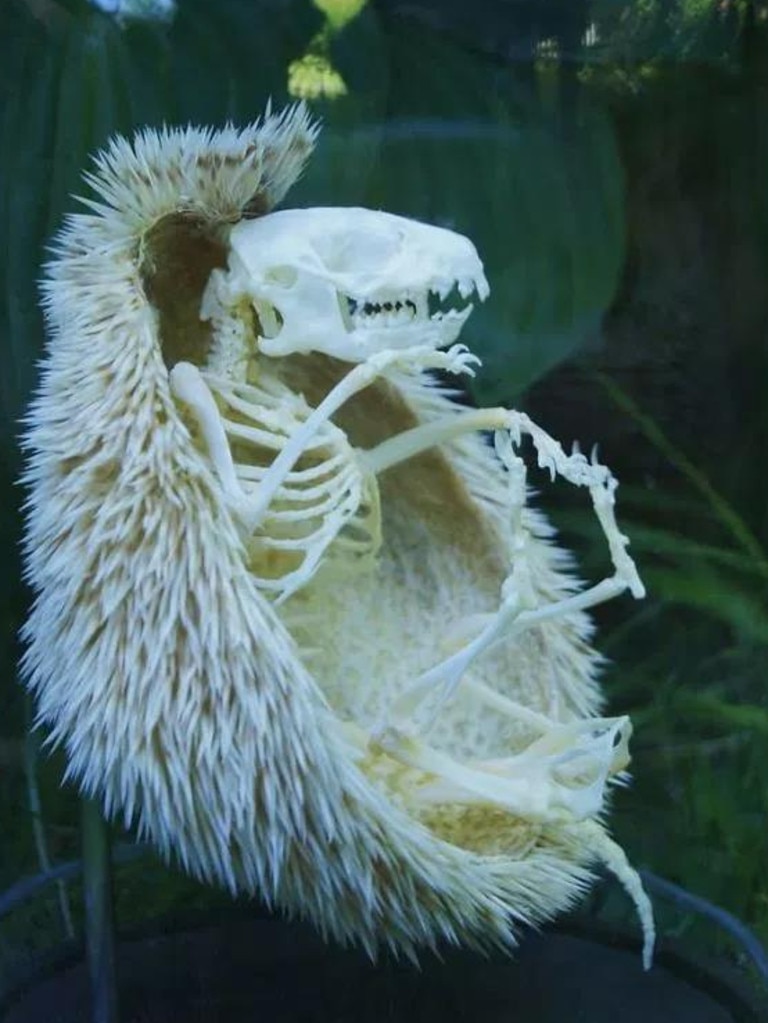 STARLINGS
Starlings dance before landing to sleep near Rahat, Israel. A mass movement of starlings in a flock like this is called a murmuration and usually happens in the evening before they roost for the night. Scientists study murmurations but still aren’t sure how the birds know how to fly like this. Starlings are not native to Australia but were introduced, so if you’re lucky, you could see them do this. A murmuration of starlings near Rahat, Israel. Picture: AFP

LIZARD SKIN
Lizards usually shed their skin in pieces but the clever former owner of this skin managed to do it all in one go. 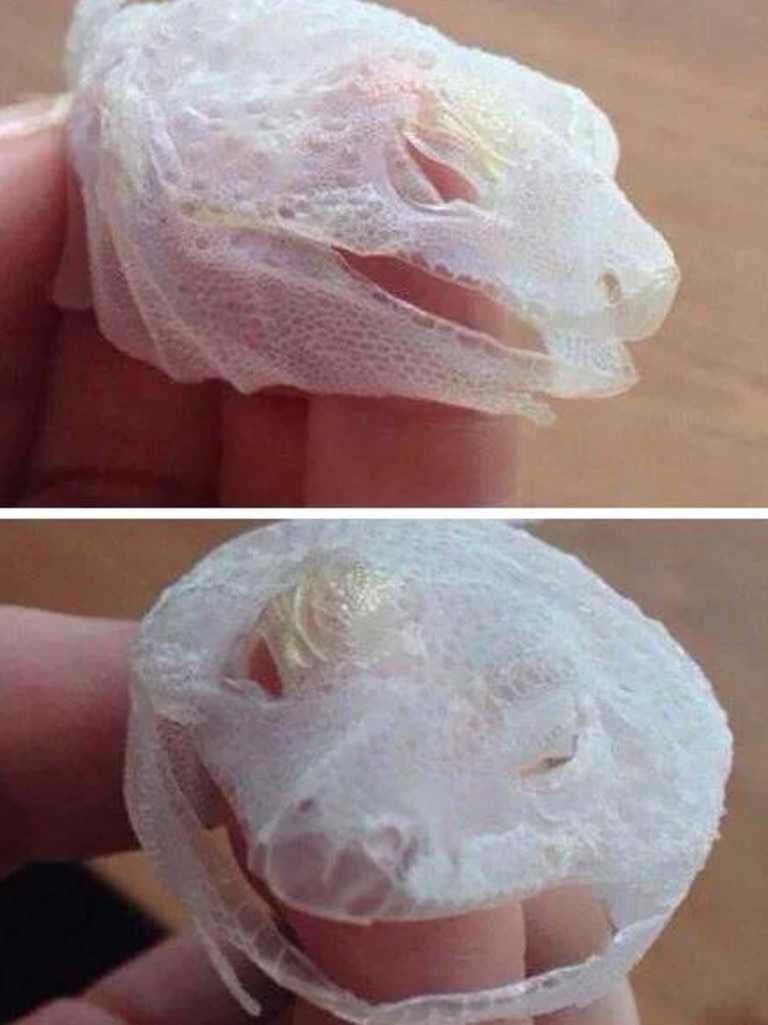 MOULD
Mould is a type of fungus that grows in filaments, or long chains. If you leave an old tin of cat food out for long enough, it will collect mould spores* and something weird could grow. The lesson? Don’t leave the cat food tin out. SNAKE IN A SHOE
It must have seemed like a good idea to this snake. A good idea for us? Shake out your shoes before you put them on. A good reminder to check your shoes.

SPIDERWEBS
Spiders create incredible webs depending on what’s required to catch food, make a home or nest for eggs and babies or get from one structure to another. Spiders know how to predict the weather and notice their environment. When the floodwaters began to rise, the spiders got to work and built themselves a safe place where it was dry. There’s a lot of silk there. What a massive effort to spin all that from your abdomen. We can’t be sure, but guess it must be a lot of spiders working together.

CLASSROOM ACTIVITIES
1. You Be the Judge
Look carefully at the photos in today’s story. Imagine that you are the judge of the Kids News Creepy Photo Competition. Choose the first, second and third place winners from today’s photos. For each winning photo, write a paragraph explaining why you chose the photo for each place. Make your paragraph as detailed as possible.

2. Extension
Use the photos that you chose in Question 1 as the inspiration for a story. You must use something from all three photos in your story.

HAVE YOUR SAY: Which photo do you like best? Do any give you the creeps?
No one-word answers. Use full sentences to explain your thinking. No comments will be shown until approved by editors.