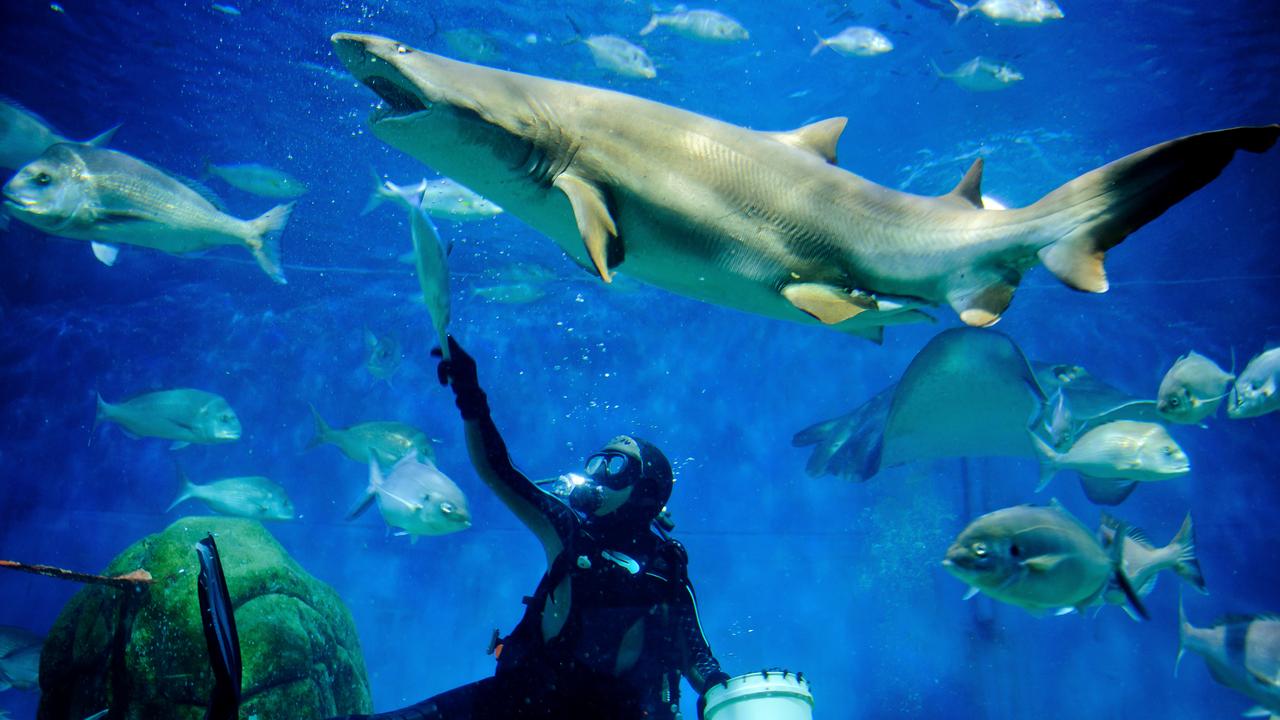 When you think of the animals that need our help on National Threatened Species Day, sharks are probably not the first that come to mind.

Surely these terrifying creatures lurking in our oceans are doing just fine on their own, right?

Not only are they not the “mindless man-eaters” many people think, but some shark populations are under serious threat. 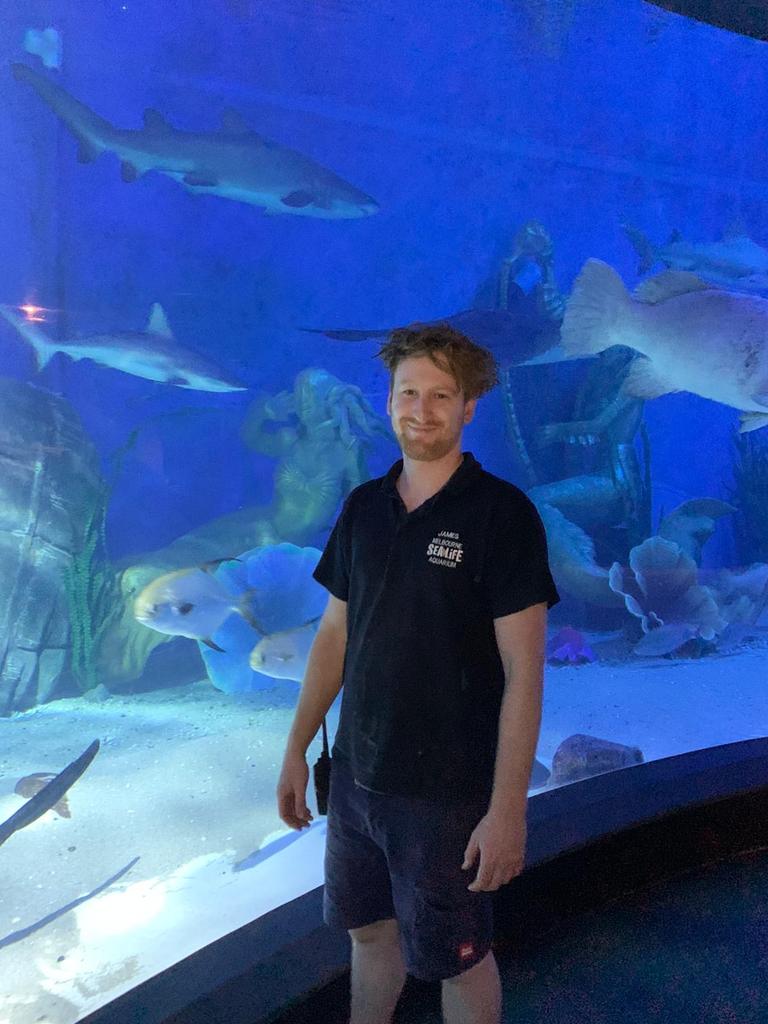 Aquarist James Gilbert says the sharks at the aquarium are friendly and curious.

Mr Gilbert said sharks got their undeserved fearsome reputation from movies and “fear of the unknown”.

“A lot of people don’t know much about them, they’re not really educated about sharks,” he said.

“When you say ‘shark’ a lot of people think of a giant great white shark. But there are so many species of sharks out there that aren’t anything like that big man-eater.”

The Australian Government lists nine species as threatened under a law it passed in 1999 called the Environmental Protection and Biodiversity Conservation Act that protects these species from being killed, injured and sold. 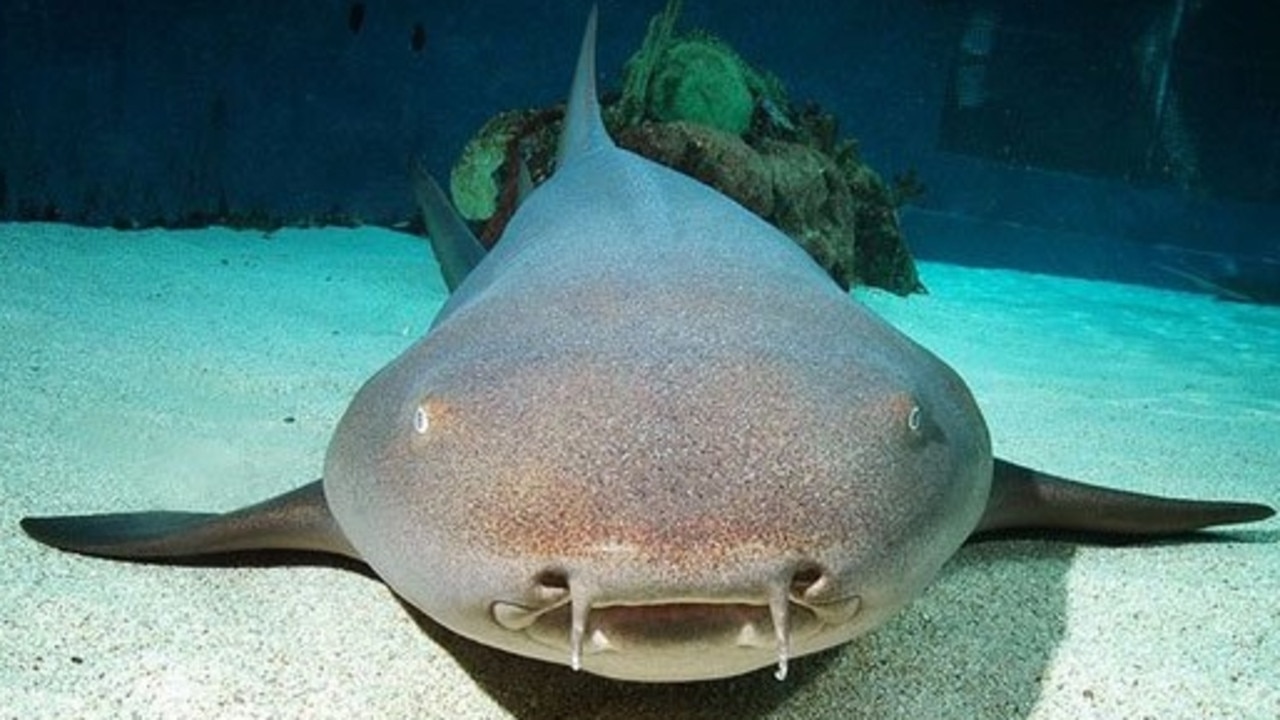 The tawny nurse shark is one of the threatened species protected by the Federal Government’s Environmental Protection and Biodiversity Conservation Act 1999.

“There are a lot of reasons why sharks are threatened,” Mr Gilbert said.

“A big one is they are commercially* and recreationally* fished, and a lot of the time with recreational fishing they are accidentally caught.

“Another reason is unsustainable* fishing practices, which means we may not leave enough food for these sharks to eat in the wild.”

“These safety nets and drum lines are designed to keep dangerous sharks out of areas where humans are swimming but they can also trap sharks which pose no real threat to humans,” he said. 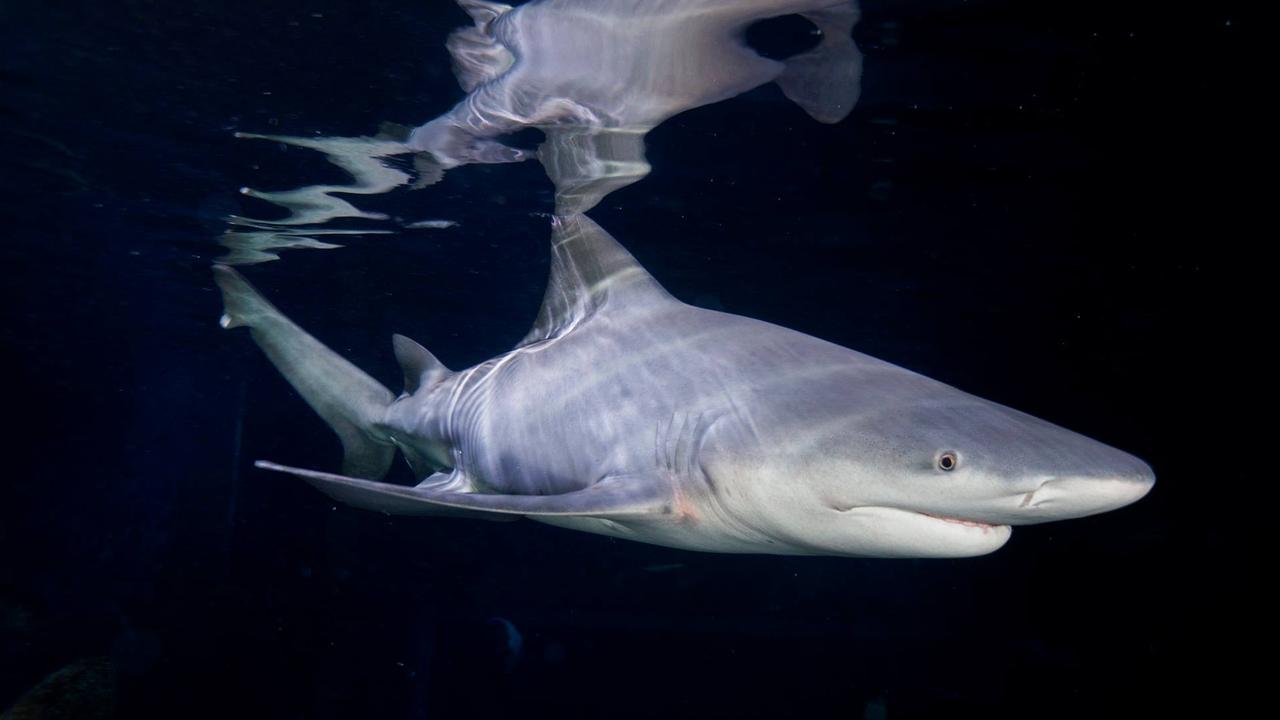 Mr Gilbert said another reason grey nurse shark numbers had declined was because they were heavily hunted in the 1950s and 1960s.

“They were thought to be these terrifying, deadly sharks because of the way they look with all these teeth hanging out,” he said.

“Because of that misinformation* they were really heavily hunted to the point we ended up with such a small amount.

“That’s why it’s really important to educate ourselves. Despite the way they look, a lot of these sharks are harmless and happy doing their own thing. 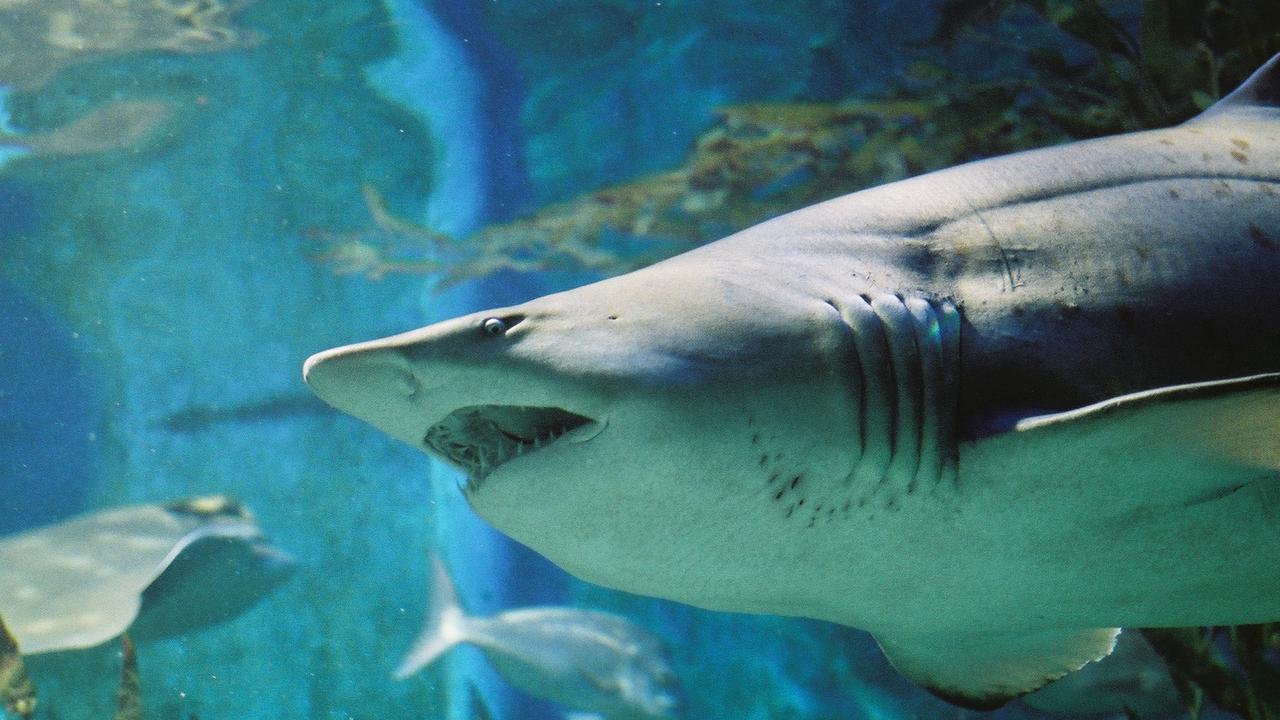 Mitchell the grey nurse shark looks a lot scarier than he is.

“Mitchell the grey nurse is a really good example of that. He does look a bit scary, but he’s definitely not. He’s a big teddy bear.”

His work days start with preparing food for the sharks and other fish.

He said sharks ate a varied diet that included salmon, pike, arrow squid and their favourite rainbow trout. Vitamins and other supplements were mixed in to help keep the sharks healthy.

After meal time, Mr Gilbert and his colleagues focus on tank maintenance and cleaning, which often means diving in with the sharks.

“These sharks here are just so friendly and really happy to be interacting with the divers. They’re really curious and they’re just the furthest thing you could possibly get from the dangerous and aggressive animals you see in movies like Jaws,” Mr Gilbert said.

He said the aquarium’s leopard sharks, Gemini and Leo, were especially fond of divers.

“They love coming up and snuggling in, and as crazy as it sounds, they love getting scratches from some of the divers,” he said. 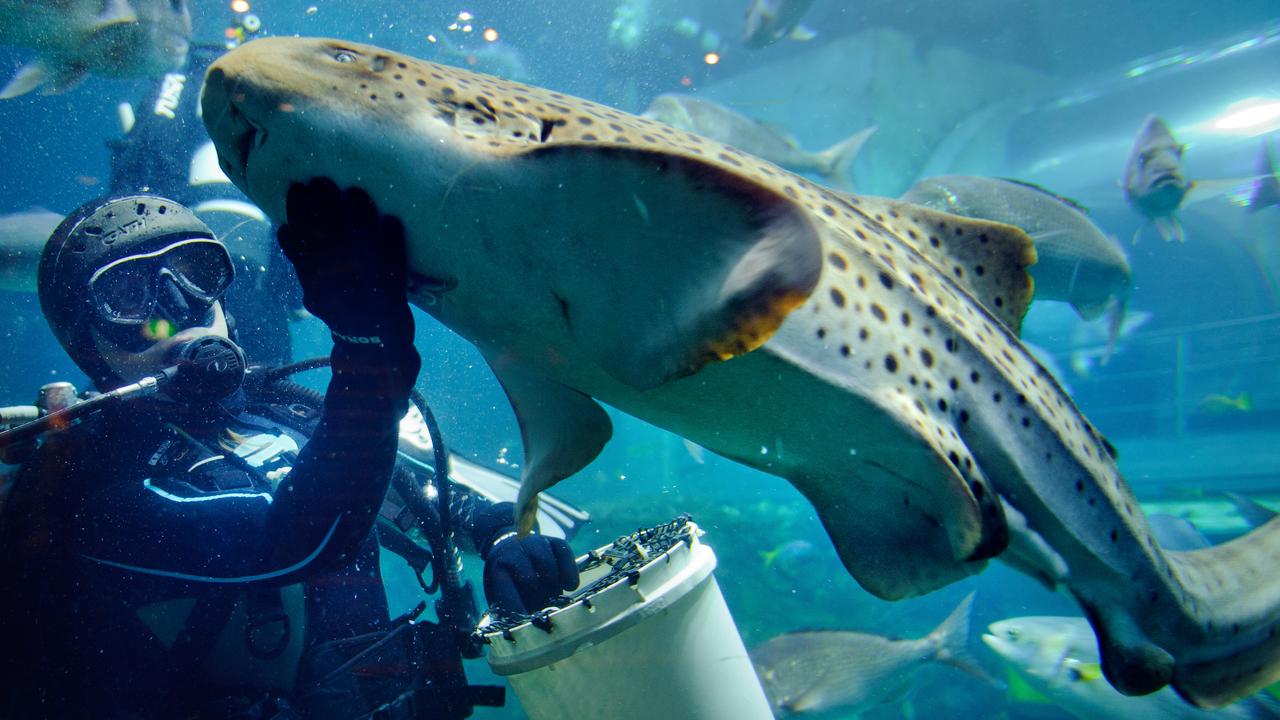 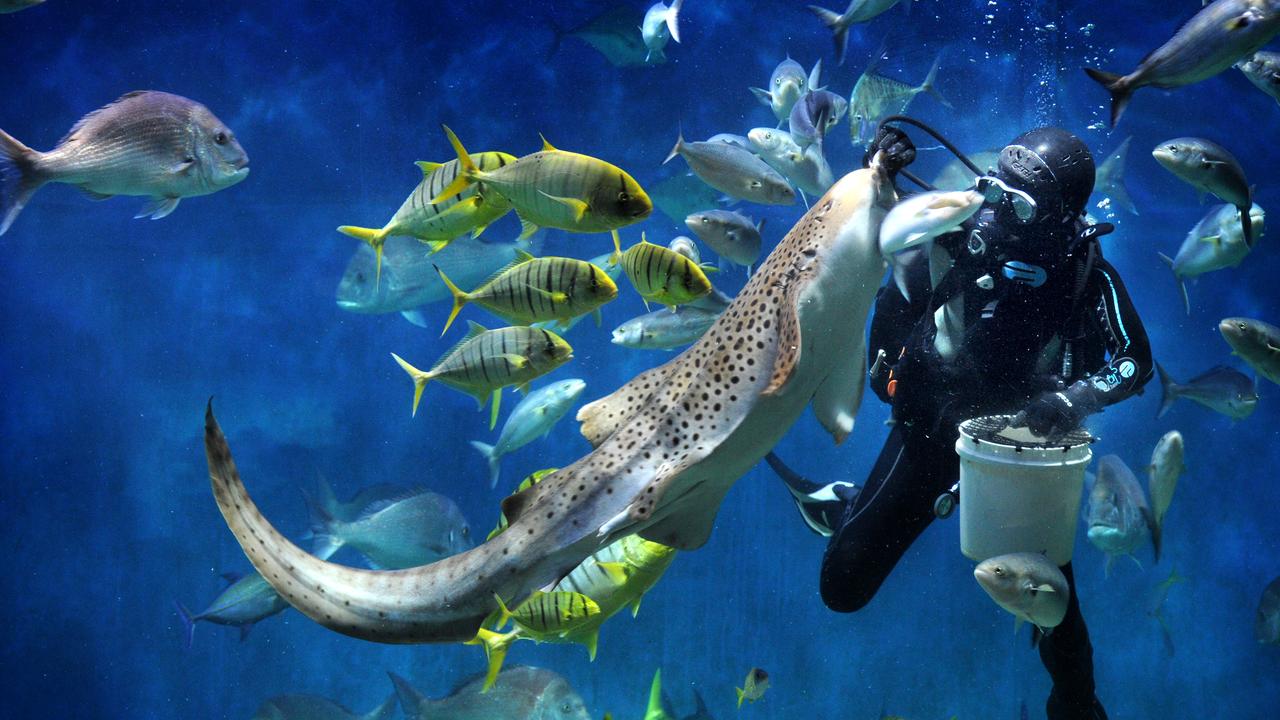 WHAT YOU CAN DO TO HELP

National Threatened Species Day aims to raise awareness of plants and animals at risk of extinction. It takes place on September 7 each year, the anniversary of the death in captivity of the last known Tasmanian tiger.

Underwater Photographer of the Year

CLASSROOM ACTIVITIES
1. A relatable shark tale
Choose one of the sharks that is named in this news story. Do your own research to find out a little more about its species. Then write a short imaginative story that stars the shark you chose. In your story, give the shark human-like traits to make them seem more relatable and less scary. See if you can include some sneaky factual information into the flow of your story too.

2. Extension
Set a timer for 5 minutes. How many adjectives can you jot down in that time that could be used to describe sharks?

VCOP ACTIVITY
I Spy Nouns
Nouns are places, names (of people, animals and objects), and time (months or days of the week).

HAVE YOUR SAY: How would you feel swimming in a shark tank?
No one-word answers. Use full sentences to explain your thinking. No comments will be published until approved by editors.