Freckles stays near the group as she appears to beg for help to get the fish hooks removed from near her eye. Picture: Facebook

A giant manta ray named Freckles has called on an Australian snorkeller for help after fishing hooks became caught under her eye.

Freckles is famous for swimming in the shallow* lagoons of Ningaloo Reef, a stretch of the Indian Ocean off Western Australia known for its incredible marine life.

Australian wildlife guide Jake Wilton had seen 30-year-old Freckles many times while snorkelling with groups and when the injured manta ray needed help, she seemed to recognise Mr Wilton and called on him to assist her.

When the 3m ray rolled over and remained still, Mr Wilton was able to spot the problem — three fishing hooks snagged* beneath her right eye.

“I’m often guiding snorkellers in the area and it’s as if she recognised me and was trusting me to help her,” Mr Wilton, 28, told The Times of London. 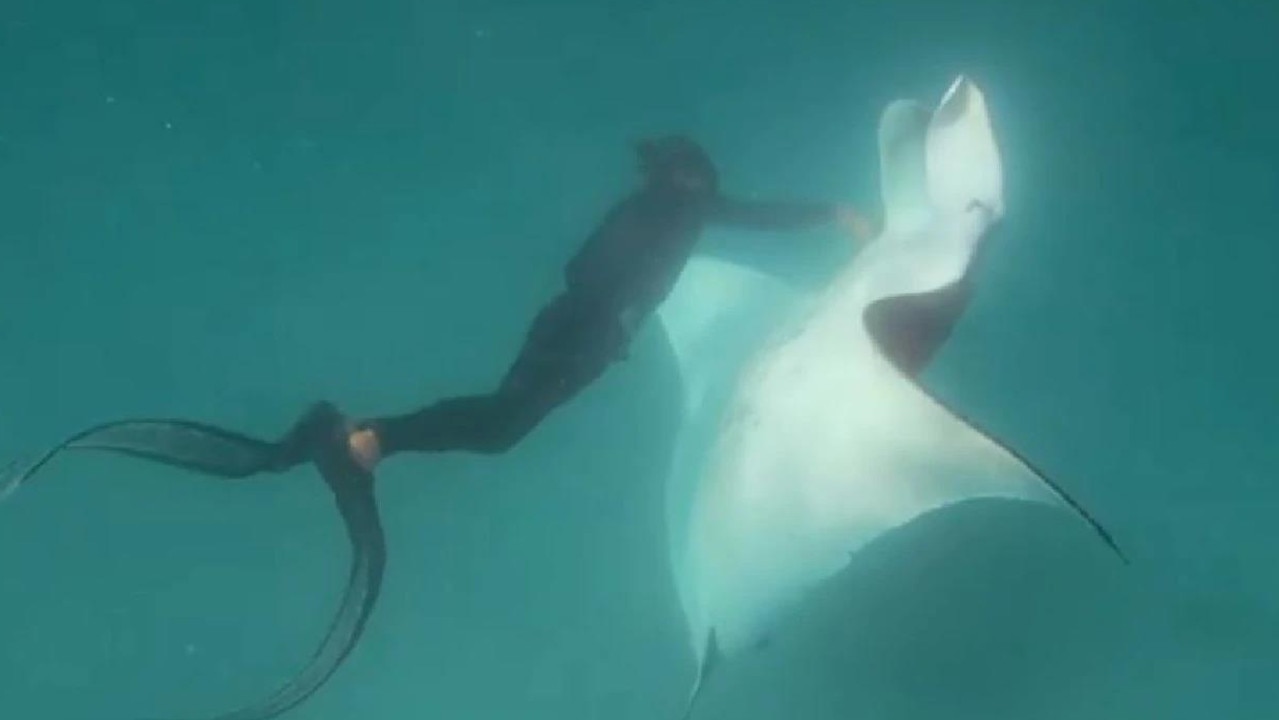 Freckles would ‘flinch away’ as the pliers got close, but kept returning to Jake, as he persevered with trying to remove the fish hooks. Picture: Facebook

Mr Wilton spent a short time swimming beside Freckles before trying to get a closer look at her injury. The ray unfurled* her lobes, two horn-like lumps on the side of her head. It was only then that he could see the three hooks.

“She had to unroll her lobe to show me where the hooks were embedded,” Mr Wilton told The Times. “She knew exactly what was going on. She had to show me, give me access. It’s incredible for an animal to work that out so quickly.”

VIDEO: Manta ray seen from beneath the water.

Rays, which have the largest brains of any fish and are believed to have high social intelligence, rely on their vision. Concerned that Freckles’s injury would become infected and blind her, Mr Wilton set about trying to remove the hooks with a pair of pliers.

It took him more than 12 attempts as Freckles would flinch* and pull away. Jake Wilton resurfaces with the fish hooks her removed from Freckles. Picture: Facebook

“The interesting thing is that, again and again, she kept on returning to Jake,” said Monty Halls, a British marine biologist* who was with the diving party, said..

“I’m sure that manta knew that he was trying to get the hooks out.”

To his relief Mr Wilton finally managed to remove them.

“I went down again, just to say goodbye and she actually stopped and just waited there,” Mr Wilton said. “For the wildlife to completely embrace you, that’s very special. I bawled* my eyes out afterwards — that says it all.”

CLASSROOM ACTIVITIES
1. Ordering the story
Reorder the following six sentences so that the summary of this news event makes sense.

2. Extension
Replace the bold words in the first activity above with a different word (or words) that mean the same thing.

HAVE YOUR SAY: Have you ever had to help an injured animal? What did you do to assist it?
No one-word answers. Use full sentences to explain your thinking. No comments will show until approved by editors.