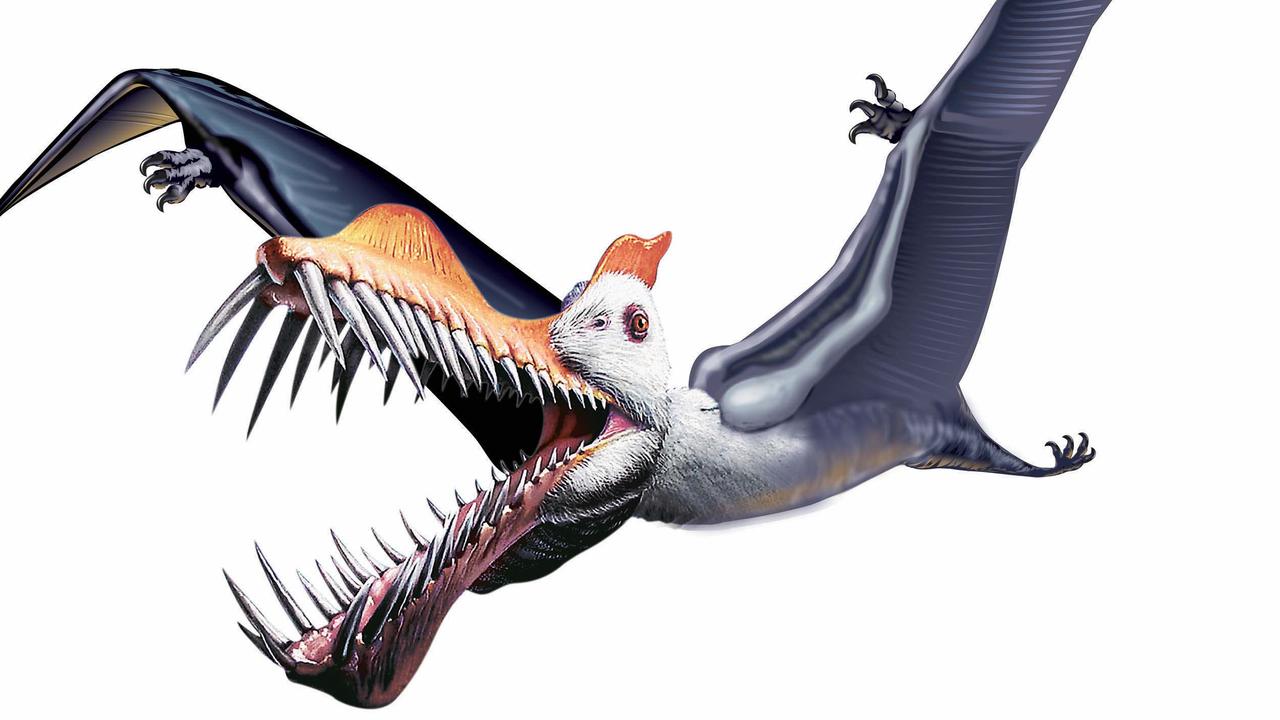 An artist's drawing showing what scientists think the new pterosaur species could have looked like.

Scientists have discovered an unknown species of giant pterosaur, the first flying creatures with a backbone.

Pterosaurs were neither dinosaur nor bird and are also known as pterodactyls. They lived during the late Triassic* period more than 200 million years ago until a massive space rock slammed into Earth, wiping out land-dwelling dinosaurs and most other forms of life more than 65 million years ago. A drawing of another type of pterosaur, Quetzalcoatlus. Pterosaurs weren’t dinosaurs nor birds.

The newly discovered member of the family, identified through remains found in northeastern Utah, US, had a wingspan of 1.5 metres and 112 teeth, including fang-like spikes sticking out near the snout.

A jutting lower jaw suggests a pelican-like pouch, perhaps to scoop up fish and small reptiles.

“They are delicately framed animals that are built for flying,” said Brooks Britt, a dinosaur scientist called a palaeontologist at Brigham Young University in Utah and lead author of a study in Nature Ecology & Evolution. This is a drawing that shows what scientists think the newly discovered pterosaur could have looked like, with many sharp teeth and a scoop-shaped mouth to scoop up food.

The species has the scientific name Caelestiventus hanseni — roughly, “heavenly wind” — and is probably the most complete skeletal remains of a pterosaur ever found.

Mr Britt said that until now there were only about 30 specimens* in the entire world from the Triassic period, most of them broken into tiny pieces.

The newly discovered creature left behind dozens of intact bones and teeth, along with an entire brain casing.

The remains are still encased* in sandstone, but scientists made accurate 3-D images and models of each fossil by scanning the rock.

It is not the biggest pterosaur ever found, but was likely the largest of its time, especially for a desert. Another type of pterosaur called Quetzalcoatlus, with other Brachiosaurus dinosaurs in the background.

It lived earlier than other desert creatures by about 65 million years. The other pterosaurs from the same period found so far came from coastal areas in what is now Europe and Greenland.

CROWD AT THE WATERHOLE

The giant pterosaur was found at a place fossil hunters call Saints & Sinners.

The rocks it was found in were part of an oasis* in a two-million square kilometre desert covered with giant sand dunes.

“During droughts, large numbers of animals — including pterosaurs, predatory dinosaurs and crocodylomorphs* — were drawn to the pond in the middle of the oasis, where they died as water dried up,” Mr Britt said.

The result was a treasure trove* of more than 18,000 bones from dozens of water-starved animals. A drawing of armour-plated Minmi dinosaurs and another type of pterosaur found in western Queensland. Ancient creatures would have crowded around waterholes to drink, but, as scientists have discovered in Utah, would have died when the water dried up.

Triassic: the time between the Permian and Jurassic times

encased: enclosed or surrounded by

oasis: a green patch with water and plants in the desert

crocodylomorphs: group that includes crocodiles and their extinct relatives

1. What are pterosaurs also known as?

2. When did pterosaurs live?

3. How many teeth did this species have?

4. Where have the other pterosaurs from the same time been found?

5. Why are there so many bones at Saints & Sinners?

Write an acrostic poem on the pterosaur using facts and information contained in the Kids News article as well as the artist’s impression of this amazing creature. Challenge yourself to write a sentence for each letter, not just one word.

Extension: Draw a picture of this pterosaur and write some facts about the creature around your illustration.

HAVE YOUR SAY: If you were a palaeontologist (dinosaur scientist) for a day, what would you like to discover? Why?
No one-word answers. Use full sentences.