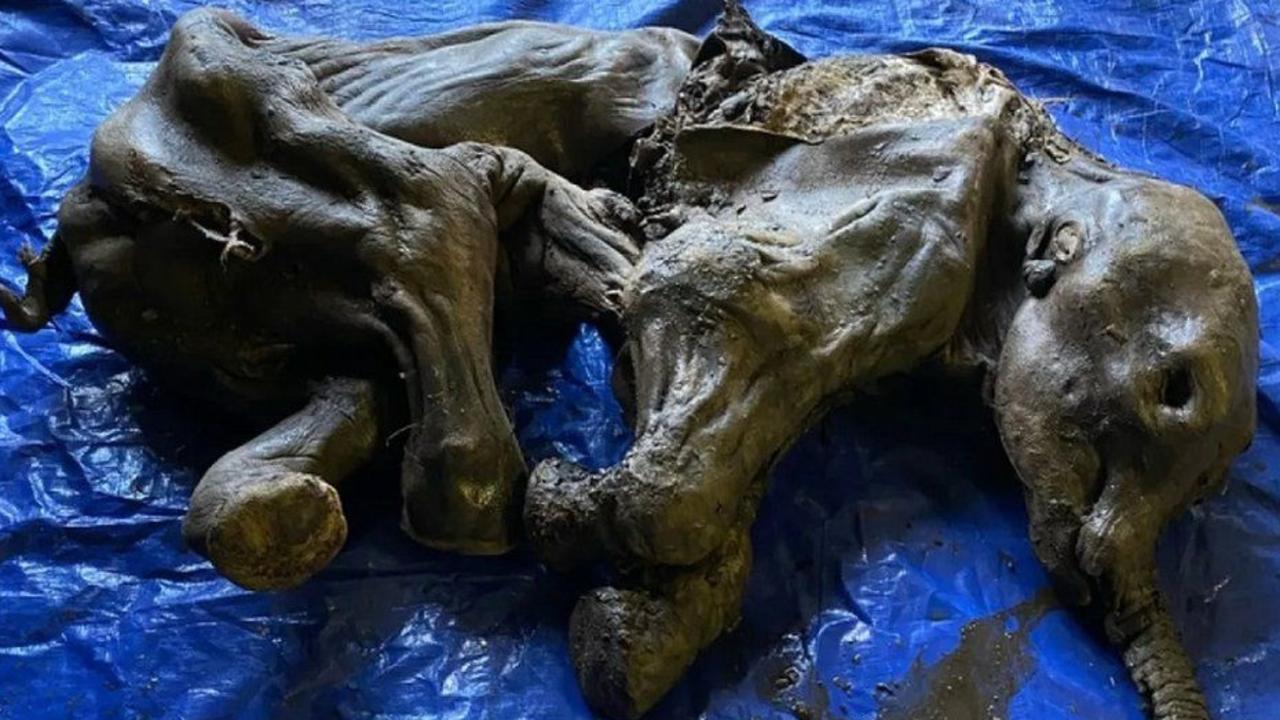 A near-intact female baby woolly mammoth was discovered last month in Yukon, Canada. She was named Nun cho ga and is estimated to have died over 30,000 years ago. Picture: Yukon Government/Tr’ondek Hwech’in

Canadian gold miners have made a rare discovery, digging up the mummified* remains of a near-complete baby woolly mammoth.

The mammoth calf, which still has its hair and skin, has been named Nun cho ga, or “big baby animal”, by members of the local First Nations community. The female baby woolly mammoth was discovered on 21 June in permafrost in Yukon, Canada. She was named Nun cho ga and is estimated to have died over 30,000 years ago. Picture: Yukon Government/Tr’ondek Hwech’in

Palaeontologist* Dr Grant Zazula described the baby woolly mammoth as “beautiful and one of the most incredible mummified Ice Age animals ever discovered in the world”.

“I am excited to get to know her more,” he said in a statement. The animal is believed to be female and would have died during the Ice Age, more than 30,000 years ago when woolly mammoths roamed the region alongside wild horses, cave lions and giant steppe* bison*. An illustration of an adult male woolly mammoth navigating a mountain pass in Arctic Alaska, 17,100 years ago, reproduced from a painting by paleo artist James Havens at the University of Alaska Museum of the North. The baby mammoth was found in the Yukon territory, Canada, which borders Alaska. Picture: supplied

The baby mammoth’s remains were discovered during excavation* through permafrost* in the Klondike gold fields of Canada’s far north.

The gold fields are in Canada’s Yukon territory, which borders the US state of Alaska. This image shows the difference in scale between woolly mammoth calf and an adult male. The replicas were exhibited in Australia in 2009 at the Australian Museum in Sydney as part of the When Mammoths Roamed exhibition. Picture: AAP Image/Tracey Nearmy

A partial mammoth calf, named Effie, was found in 1948 at a gold mine in Alaska’s interior.

A 42,000-year old mummified infant woolly mammoth, known as Lyuba, was also discovered in Siberia in 2007. Lyuba, a 42,000 years old woolly mammoth calf found in Siberia in 2007, was exhibited at Australian Museum in Sydney in 2017. Picture: AAP Image/Daniel Munoz

Lyuba and Nun cho ga are roughly the same size, according to the Yukon government.

It noted that the Yukon has “a world-renowned* fossil record of Ice Age animals, but mummified remains with skin and hair are rarely unearthed”.

CLASSROOM ACTIVITIES
1. Getting to know the woolly mammoth
Palaeontologist Dr Grant Zazula said, “I am excited to get to know her more,”. What does this mean? How does he plan to get to know a mummified animal?! What information might he hope to find out or want to know?

2. Extension
Why do you think it is rare to find a mummified animal with its skin and hair still intact? What might this mean about where or how it died?