A Voeltzkow’s chameleon in Madagascar, photographed on March 12, 2020. Picture: SNSB/Frank Glaw via AP

Earth is currently going through its sixth mass extinction event, with human activity pushing thousands of species of animals to the brink* every year.

But amid the extinction, there are moments of hope when species once thought to have been lost forever are rediscovered decades later.

The most recent example is the “lost” Voeltzkow’s chameleon, which no one had seen for more than 100 years.

Researchers found the colour-changing critters in the garden of the Chez Madame Chabaud hotel in the Madagascan town of Mahajanga earlier this year.

The three males and 15 females are the first to be discovered by humans since 1913.

Voeltzkow’s chameleon is featured on the Global Wildlife Conservation (GWC) list of the 25 “most wanted” lost species.

“The Voeltzkow’s chameleon adds colour and beauty to the planet, and reminds us that even when all seems lost, a great adventure can rekindle hope,” said Don Church, GWC president and a program leader with Search for Lost Species.

“Now we have so much to learn about this extraordinary reptile, including how we can best save it from extinction.”

The rediscovered reptile is just one of many lost animals to be found in recent years. Kids News has covered some of these important finds, including the Vietnamese mouse-deer and Wallace’s giant bee, both found in 2019 and the Wondiwoi tree kangaroo, found in 2018. Here are some other fascinating finds. 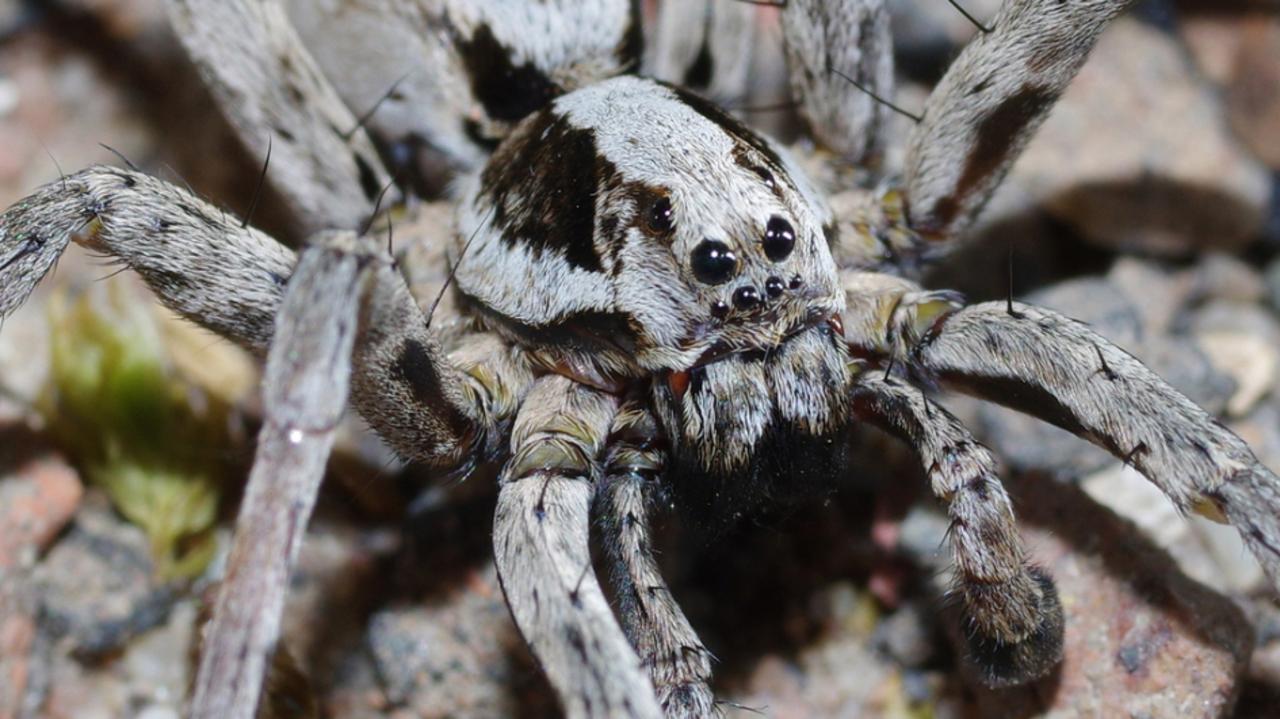 A male great fox-spider, one of the UK’s largest and most endangered spiders which has been spotted for the first time in more than 25 years. Picture: Waite/Surrey Wildlife Trust/PA Wire

MASSIVE MISSING SPIDER
News of the Voeltzkow’s chameleon rediscovery in a hotel comes just days after another lost animal was found in an even stranger place – a Ministry of Defence training base in Surrey, UK.

The great fox-spider hadn’t been seen since 1993 before it was found by Surry Wildlife Trust’s Mike Waite this autumn.

He’d spent the last two years searching for the arachnid* with a torch late at night.

“As soon as my torch fell on it I knew what it was,” Mr Waite told The Guardian.

“I was elated. With coronavirus there have been lots of ups and downs this year, and I also turned 60, so it was a good celebration of that.

“It’s a gorgeous spider, if you’re into that kind of thing.”

The great fox-spider, which is one of Britain’s biggest arachnids, is part of the wolf-spider family and can grow up to 5cm in diameter, including their legs.

They hunt food such as beetles and smaller spiders at night, injecting them with venom that liquefies internal organs. 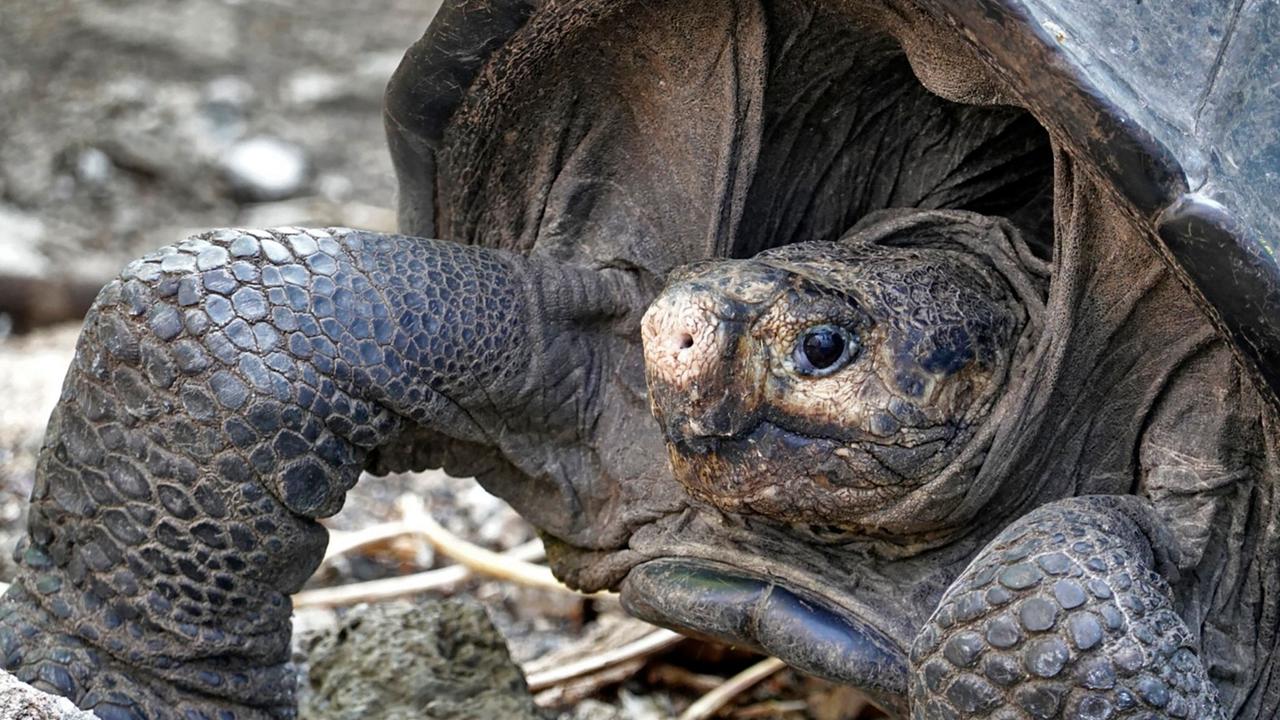 A giant Galapagos tortoise thought to have gone extinct about a century ago, is seen at the Galapagos National Park on Santa Cruz Island in the Galapagos Archipelago on February 19, 2019. The adult female was found earlier in the day during an expedition on Fernandina Island. Picture: AFP

TURTLE-Y MIRACULOUS FIND
The Fernandina Galápagos Tortoise was thought to be extinct for more than 100 years.

No one had seen the giant reptile since 1906 until a lone female was found in February 2019.

The 110-year-old tortoise, named Fern by her finders, was discovered surviving on a green patch surrounded by lava flows on the island of Fernandina.

Forrest Galante, the biologist and Animal Planet presenter who discovered Fern, even said she might be able to resurrect her species using decades-old sperm stored inside her from her last mating.

“It’s incredible, but female tortoises are able to withhold viable* sperm* within them for decades, then produce offspring without having to mate a second time,” Mr Galante told The Mirror.

“Nobody knows anything about the Fernandina tortoise because it’s the first one ever found, but given the harshness of the environment and the uniqueness of the animal, it’s certainly possible that she is able to hold viable sperm for 100 years.” The Somali elephant shrew hadn’t been seen since 1968. Picture: AFP

NOT-SO-GIANT ELEPHANT SHREW
Despite its giant-sounding name, the Somali elephant shrew or sengi is tiny.

It’s actually more closely related to elephants than true shrews, and it takes its name from the fact that it has a very long nose, which it uses to suck up ants.

The Somali sengi was rediscovered in August after being missing for more than 50 years.

Researchers from the GWC’s Search for Lost Species program found a population of the tiny animals in Djibouti, the first found since 1968.

The speedy mouse-sized beast can run at speeds of up to 30kmh and was caught in the very first of 1259 traps set in 12 locations by researchers searching for the missing sengi.

“When we opened the first trap and saw the little tuft of hair on the tip of its tail, we just looked at one another and couldn’t believe it,” he said.

“A number of small mammal surveys since the 1970s did not find the Somali sengi in Djibouti.” Only three Jackson’s climbing salamanders have ever been found. Picture: World Land Trust

GOLDEN WONDER
Jackson’s climbing salamander was first discovered in the misty forests of Guatemalan mountains in 1975.

Nicknamed the “golden wonder” for its brilliant colour, the salamander’s common name is taken from its original American finder, Jeremy Jackson, who spotted the unusual creature while exploring the jungle with friend Paul Elias.

After it was found, Jackson’s climbing salamander was then lost to science for 42 years.

Mr Jackson and Mr Elias retraced their steps in 2014 to find the salamander again and still didn’t see one.

But in 2017, a guard at the Finca San Isidro Amphibian Reserve in Ramos León found a young specimen at the edge of the reserve while out on a patrol.

It was only the third ever sighting of a Jackson’s climbing salamander.

“We all held our breath hoping that this exceptional phantom* would reappear,” Mr Elias said.

“The rediscovery of this rarest of the rare shows how important habitat preservation is to the persistence of these special animals in these exceptional places, and for me personally it is a moment of sheer joy.” 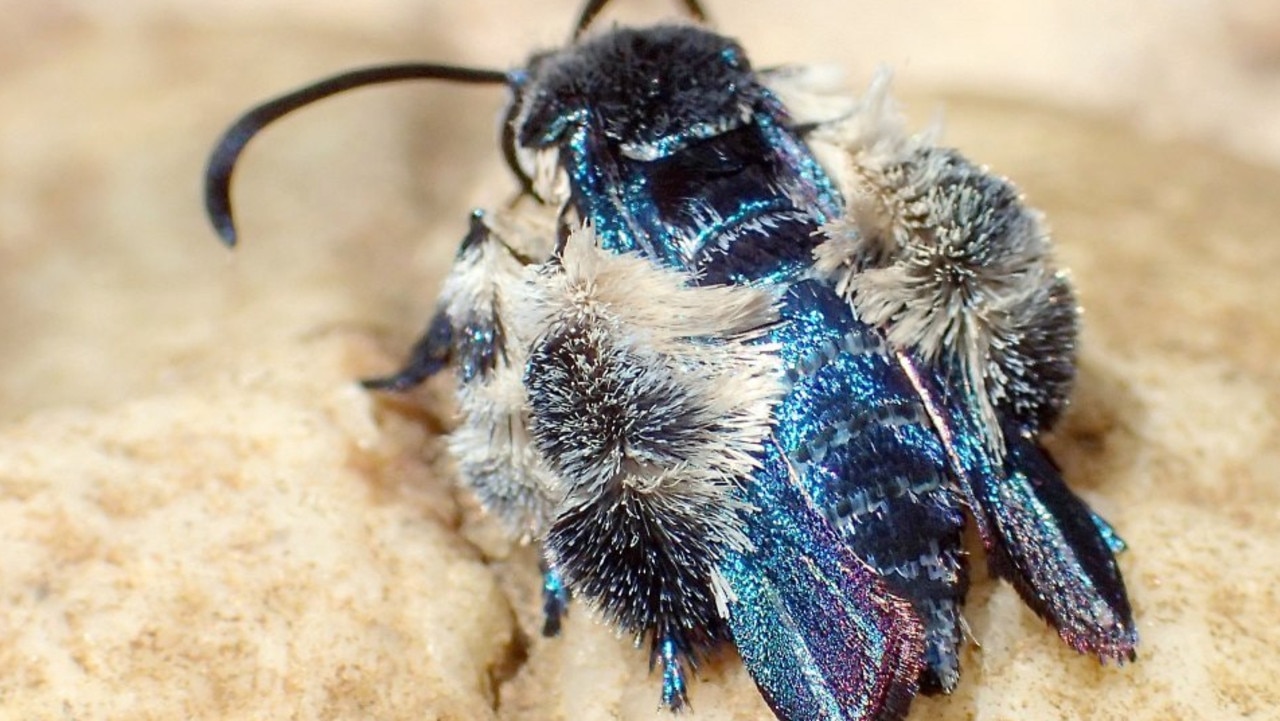 The oriental blue clearwing is named after its striking blue shimmer. Picture: Wikipedia

MYSTERY MOTH
The oriental blue clearwing moth gave a researcher an incredible buzz when she rediscovered it 130 years after it was thought to have been lost to science.

Before her discovery, the only knowledge we had of the oriental blue clearwing came from a single damaged specimen collected in Indonesia in 1887.

Skowron Volponi, of the University of Gdańsk, rediscovered the moth when she noticed bright flashes of blue light on a river bank.

And as Malaysia has one of the highest deforestation rates in the world, the beautiful creature might not be here for long.

“These highly vulnerable ecosystems are vanishing rapidly,” Skowron Volponi warned in her findings.

“Given the current rate of habitat loss and species extinction, it is of crucial importance to study and catalogue both species new to science and those that have been discovered many years ago and not seen since that time.”

STILL OUT THERE?
There are still weird and wonderful beasts that scientists haven’t given up hope of finding.

It was named in honour of David Attenborough, though he didn’t discover it.

Tracks found by researchers and reports from locals give the scientific community hope that Sir David’s long-beaked echidna could one day be rediscovered.

Likewise, hope remains for the pink-headed duck, not seen since 1949 in India.

CLASSROOM ACTIVITIES
1. Lost Animal Mural
Use the detail and information provided in the Kids News article to draw a mural/collage of some or all of these lost animals that have been found. Include details such as where they were found after such a long time.

2. Extension
How is human activity pushing animal species to extinction every year?

What are some small ways we can help reduce our impact on the environment?

HAVE YOUR SAY: What extinct — or thought to be extinct — animal would you like to rediscover?
No one-word answers. Use full sentences to explain your thinking. No comments will be published until approved by editors.