Today’s male giraffes slug it out with a move known as “necking” but researchers say an ancient relative used to butt heads. These two young duelling Masai males take a break from "necking" in Africa. Picture: Leinani Shak Yosaitis/2018 National Geographic Travel Photographer of the Year

The giraffe’s distinctive long neck may have evolved* from males bashing heads while battling it out for a female mate.

Fossilised* remains of Discokeryx, an early member of the giraffe family that lived about 17 million years ago, revealed a solid skull, thick neck and strong cervical vertebrae* perfect for high-speed, head-to-head combat, according to the researchers.

Over the course of millions of years, the animal’s head and neck “adapted for headbutting behaviour,” said American Museum of Natural History palaeontologist* and study co-author Dr Jin Meng. “The traditional hypothesis* for … elongation* of the giraffe neck is eating – reaching up to get tree leaves,” Dr Meng said. “This new finding shows that, in the giraffe family, members do different things in their early evolution.

“The new species represents an extreme example in which the neck … becomes very thick to absorb the power and impact from powerful headbutting.”

The Discokeryx was named “disc horn” for its helmet-like skull with horn-like knobs known as ossicones, which are still present in modern giraffes.

“Ossicones, like horns and antlers, usually serve as weapons for males fighting for mates,” said Chinese Academy of Sciences palaeontologist Dr Shi-Qi Wang, lead author of the study published in the journal Science. 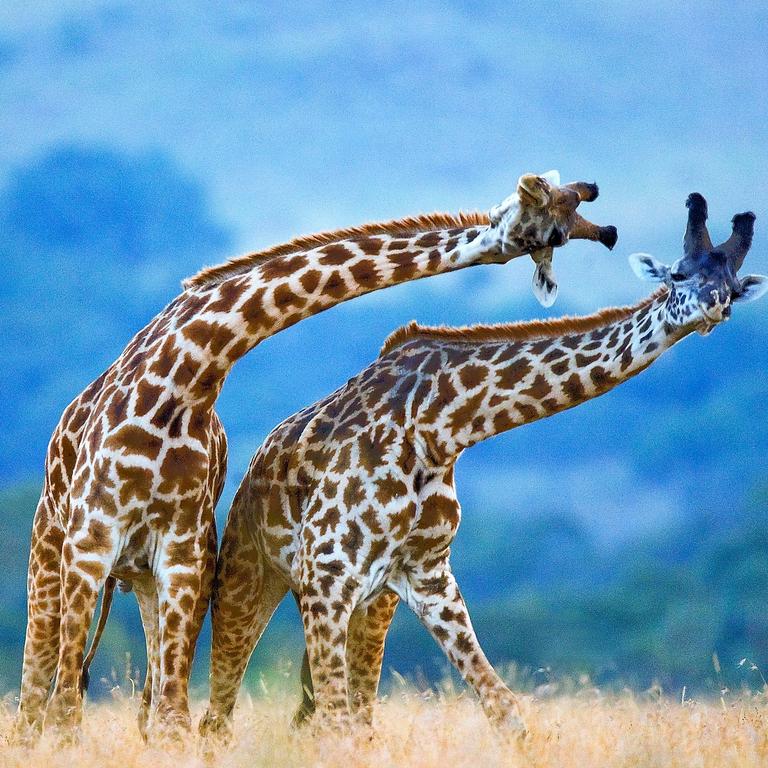 Finding a mate can be a delicate dance in the wild and modern giraffes use a move called “necking”. Picture: supplied

Discovered in the Xinjiang region in northwestern China, researchers said the skeleton had the most complex head and neck bones of any mammal and was roughly the size of a large bighorn sheep.

Discokeryx lived in open grassland with patches of trees and shrubs during the Miocene era. It lived alongside shovel-tusked elephants, hornless rhinos, horned pigs, deer with crown-like antlers, three-toed horses and various antelopes.

Predators* included sabre-toothed cats, hyenas and a mammal called “dog bears”, which were as big as a polar bear. A firm zoo and safari favourite, today’s giraffe still has to tough it out to win a mate. Picture: Geoffroy Van der Hasselt / AFP)

Giraffes today still strike each other in a move known as “necking”. Longer-necked males often win these duels – and they may also get the girl.

“If a male giraffe has a shorter neck, then the female may refuse the mating request of the male,” Dr Wang said.

Discokeryx is not a direct ancestor but a side branch of the giraffe family. The modern giraffe, hailing from sub-Saharan Africa, is the world’s tallest living land animal. Males measure up to 5.5m and females are up to 4.3m tall, with the neck stretching up to 1.8m, the longest of any animal on Earth.

Animal numbers up in Africa

Elephant ‘Happy’ … but not a person

CLASSROOM ACTIVITIES
1. Evolution of the giraffe
Draw a sketch of the Discokeryx giraffe and modern giraffes that live today.

Label the similarities and differences of your two sketches to compare the changes in the giraffe over time.

2. Extension
Write an acrostic poem on a “giraffe” and facts you know about them.