An unlikely pair – a scientist and an emperor penguin – have become friends in one of the most remote locations on the planet.

Australian Antarctic expeditioner Matthew Williams, based at the Mawson Research Station, was undertaking* an annual emperor penguin census* at the Auster and Taylor rookeries*.

“In size and custom, they’re the only animal to roost* and breed over the harsh Antarctic winter and deserve both awe* and respect,” he said.

When Mr Williams and his team head to the iceberg, they follow strict rules on keeping a distance from wildlife and park well away, marking the spot on the GPS*.

However, one day, when Mr Williams stepped from his vehicle, he noticed a number of tiny black dots in the distance hurrying towards him, as if excited to see him.

He recalled the first to arrive was a large penguin – larger than the others and clean, healthy, confident – but clumsily quick to approach. “He waddled at first, then flopped hard onto his belly, kicked off with his hind feet as if swimming and slid towards me quickly. I lagged behind to watch,” Mr Williams said.

The penguin got within a metre of him, tilted its head to the sky and let loose a strange noise.

Mr Williams said he couldn’t explain what happened next.

“As soon as I spoke, he vocalised* again. I repeated ‘hi buddy’ and again he returned the chat.”

Mr Williams said he noticed the tiniest little smudge on his toe, on this otherwise pristine* creature. 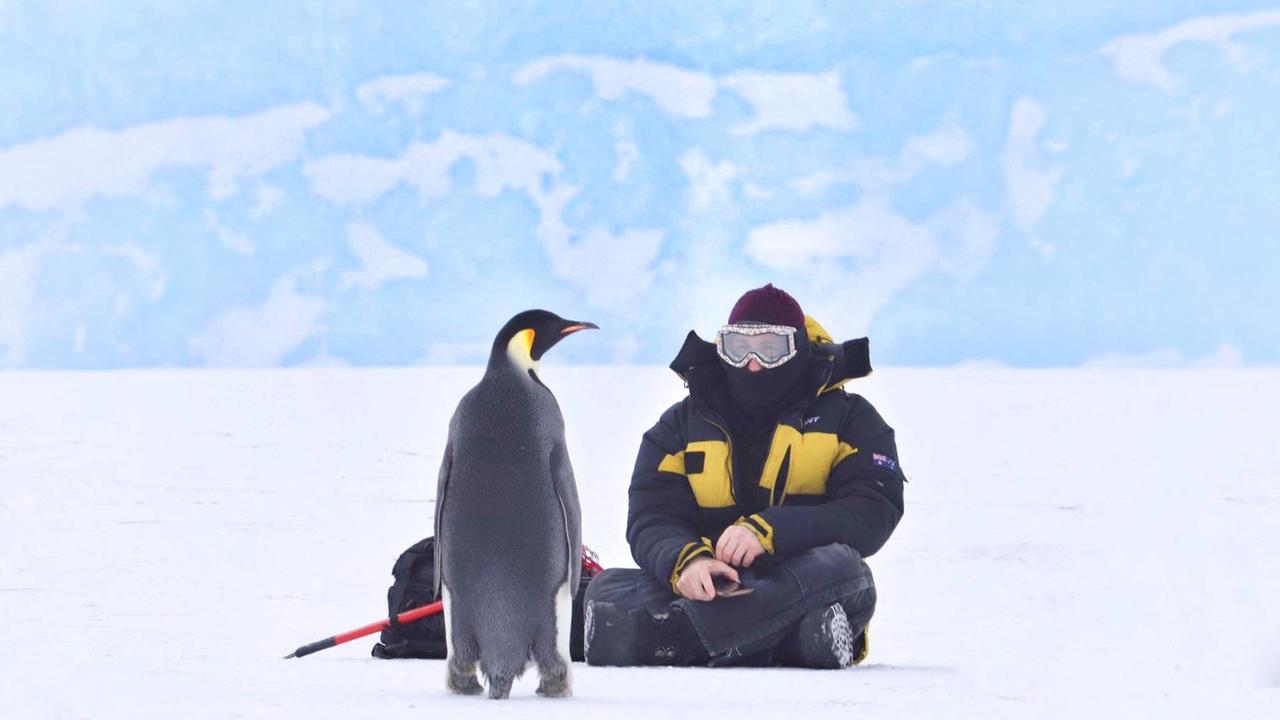 After that, the pair were almost inseparable during Mr Williams’ visit to the rookery. He went back twice more, finding Smudge each time.

When he returned two weeks later, a large penguin waddled towards him. Mr Williams said he thought it couldn’t be the same penguin, but it was Smudge again.

“I lagged behind again as the team walked straight to the rookery. They were excited because the chicks were starting to hatch and you could hear little chirps everywhere,” he said.

“I thought to myself, you are just like my doggo back home. And off I went again after a slow walk with Smudge in hot pursuit.”

EMPEROR PENGUIN
This is the largest of all penguin species. Adults are about 115cm tall.

They only live at Antarctica. Each April, they come ashore to breed. In June, females lay one egg each and then pass it to the father to look after while they head out to sea to eat krill, squid and fish.

The father looks after the egg until the mother comes back in July with a full belly of food, some of which she feeds the chick. The father then gets a turn at going to sea to eat.

When some of the ice melts in December, chicks learn to swim and hunt for themselves.

Emperor penguins are classified as near threatened and scientists expect the population to decline in the future due to global warming. MAWSON, ANTARCTICA
Mawson Research Station was set up in 1954 and is the longest continuously operating station south of the Antarctic Circle.

It is named after Australian explorer Sir Douglas Mawson.

It is the most westerly of Australia’s three stations on continental Antarctica. It is about 5200km southwest of Perth, Western Australia and takes about 10-12 days to get there by ship from Hobart, Tasmania.

Local time at Mawson is three hours behind Perth and six hours behind daylight saving time in Melbourne, Sydney and Hobart.

In February, the time of year when there is usually the least ice, ships can come within 100m of the station.

Expeditioners live in accommodation with bedrooms (nicknamed dongas), bathrooms, living rooms and kitchens. There is a library, home theatre and gym and expeditioners can stay fit indoor climbing or playing sport indoors and out.

2. Extension
Why is the Mawson Research Station there? Write a list of all of the things you think scientists can learn about and research there. Next to each item, write an explanation of what is so important or interesting about it.

HAVE YOUR SAY: What wild animal would you like to make friends with?
No one-word answers. Use full sentences to explain your thinking. No comments will be published until approved by editors.