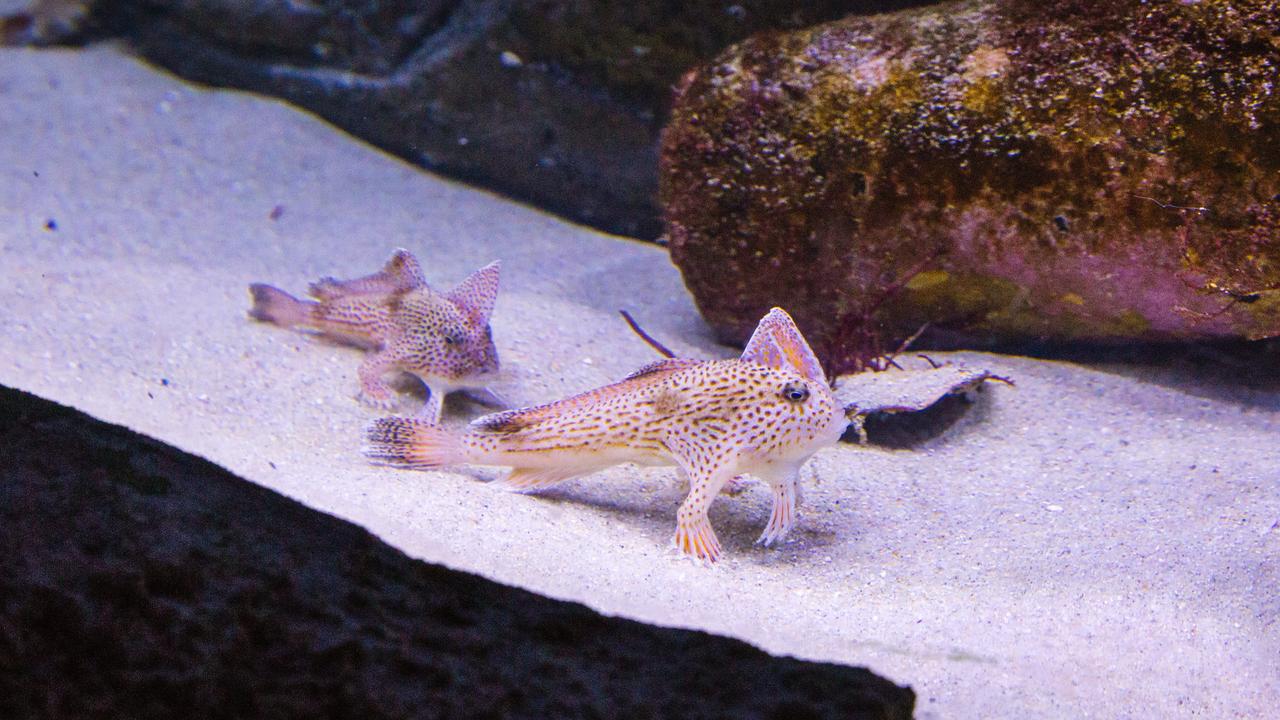 Experts are one step closer to saving the critically endangered spotted handfish, a cartoon-like creature that only lives in Tasmania’s Derwent Estuary.

It’s called a handfish because it looks like it walks on its hands, which are actually delicate pectoral* fins shaped like the feet of geckos or frogs.

Scientists are working to save from extinction three critically endangered species of the bottom-dwelling handfish — the red handfish, spotted handfish, and Ziebell’s handfish — by protecting their habitat and hopefully breeding them in captivity*.

In preparation for helping the spotted handfish breed, the team at Sea Life Melbourne Aquarium, with vets from an organisation called The Unusual Pet Vets, have used ultrasound* equipment to confirm the sex of the five spotted handfish they have in their care.

The tests confirmed they have four females and one male.

While working out which are female and male may seem like a small achievement when you’re working with most other species, in the case of the spotted handfish, it’s quite a big deal. There is no way of telling from the outside which is which as their reproductive organs are internal.

Also, giving a fish an ultrasound without hurting or stressing it — or even getting it to stay still — is complicated. Giving a spotted handfish an ultrasound to determine its sex. Picture: supplied

Sea Life Melbourne’s Paul Hale is now feeling very optimistic about the chances of being able to breed young spotted handfish at the aquarium.

“We were pleased to discover that we have one male and four female handfish, which means that we definitely have a chance of being able to breed them and further contribute to the conservation of the species – before we were just guessing,” Mr Hale said.

“Not only is it a fundamental part of any breeding program to be able to distinguish the sex of the creatures, we were also able to collect valuable information that will be critical to future breeding programs.

“Our goal is to contribute to a headstart program. This would involve us breeding the handfish and raising the juveniles* at the aquarium. When they are large enough, we would release the young fish into their natural habitat in the Derwent Estuary. This program increases their chance of survival as the fish would complete the most vulnerable stages of their life at the aquarium and can then go on to breed and continue the circle of life in the wild.”

Staff at Sea Life Melbourne are working on replicating* the native habitat of the spotted handfish by continually adjusting the temperature and salinity of the water, light levels and selection of plants.

Late last year the team had a great surprise: two of the female handfish had laid eggs.

Unfortunately, the spotted handfish they now know to be a male showed no interest in fertilising the eggs and so the eggs didn’t result in baby fish.

The Handfish Conservation Project was set up in 2018 to save the three critically endangered species of handfish. It’s a joint project between Sea Life, the CSIRO, the Zoo and Aquarium Association, the National Environmental Science Program and Seahorse World in Tasmania. CLASSROOM ACTIVITIES
1. Handfish habitat
In the article, we learn that scientists are working to protect the handfish’s habitat and also that aquarium staff are working hard to replicate their habitat to increase their chances of successful breeding in captivity. Perform some research to find out more about the native habitat of the handfish and then create a drawing or diorama (depending on how much time you have) of a typical habitat. Include labels to provide further information.

2. Extension
Draw and write a description of one of the three critically endangered species of handfish in this story, like you might find in a “Fish Identification Guide”.