Gorgosaurus dinosaur set to fetch millions of dollars at auction The 3m tall Gorgosaurus skeleton is unveiled at Sotheby’s auction house in New York ahead of its auction on July 28, 2022. The specimen is expected to sell for $US5 million to $US8 million. Picture: AFP

The skeleton of a Gorgosaurus dinosaur is going up for auction for the first time and is expected to fetch between $US5 million and $US8 million.

Sotheby’s auction house will put the 3m tall, 6.7m long specimen under the hammer* in New York on July 28.

Sotheby’s described the skeleton as “one of the most valuable dinosaurs to ever appear on the market”.

The Gorgosaurus roamed the earth about 77 million years ago. A typical adult weighed about two tonnes, slightly smaller than its more famous relative, the Tyrannosaurus rex.

Palaeontologists* say it was fiercer and faster than the T-rex, with a stronger bite of about 42,000 newtons* compared to the 35,000 newton bite of a T-rex. An artist’s depiction of a Gorgosaurus using its serrated teeth to tear apart a corythosaurus in Canada, 75 million years ago. Picture: Danielle Dufault

The skeleton was discovered in the Judith River Formation near Havre, in the US state of Montana in 2018.

The sale will mark the first time that Sotheby’s has auctioned a full dinosaur skeleton since it sold Sue the T-rex in 1997 for $US8.36 million.

“All of the other specimens of Gorgosaurus that have been found are in museums,” said Sotheby’s head of science and popular culture, Cassandra Hatton.

“This is the only one that you can actually buy, so it’s an exciting moment, both for private collectors and institutions.” An art handler looks at the Gorgosaurus skeleton which will be auctioned at Sotheby’s on July 28. Picture: AFP

Unlike other countries, the US does not restrict the sale or export of fossils, meaning the skeleton could end up overseas.

Even if it sells near its top price estimate of $US8 million, the Gorgosaurus will be a bargain compared to a T-rex fossil nicknamed Stan that sold for a massive $US31.8 million in 2020.

That was the highest price ever paid for a fossil. It was sold by Christie’s auction house in New York, which initially estimated Stan would sell for $US6 million to $US8 million. 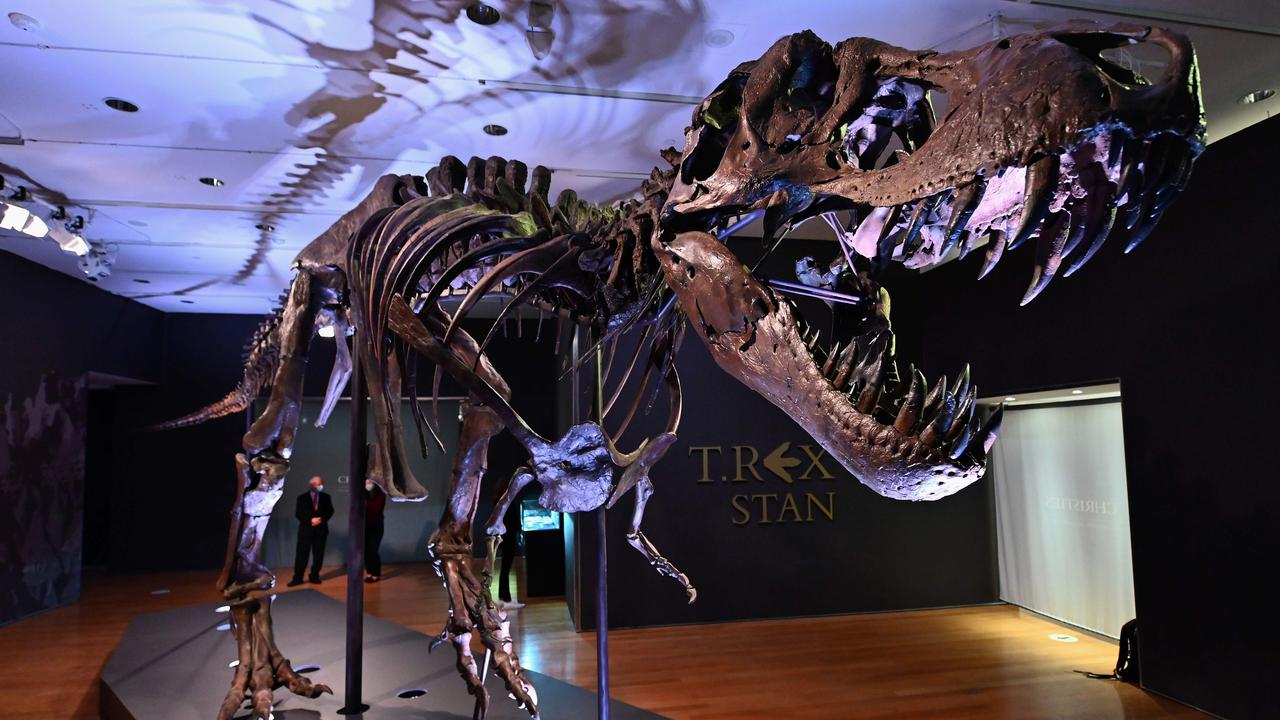 Stan the T-rex sold for a record $US31.8 million in 2020 and will now be a star attraction at a new museum of natural history in the United Arab Emirates capital of Abu Dhabi when it opens in 2025. Picture: AFP

Stan’s buyer was anonymous* and little was heard about the fossil after its sale. This worried palaeontologists who feared it had been bought by a private owner who might no longer give them access to the fossil for research.

But in March this year, officials in Abu Dhabi announced that the 11.7m long T-rex fossil would be a star attraction at a new museum of natural history, set to open in the United Arab Emirates capital in 2025.

Billions of T-rex roamed the Earth

CLASSROOM ACTIVITIES
1. Gorgosaurus facts
Write down five facts about the Gorgosaurus that can be found in this news story.

Use your research skills to find out five new facts about the gorgosaurus.

Identify two similarities and two differences between Gorgosaurus and T-rex.

2. Extension
Do you think that a price tag of $US5-8 million is fair for a 77 million year old dinosaur skeleton? Why or why not?

Does the fact that the most expensive price ever paid for a painting (Leonardo da Vinci’s Salvator Mundi) was $US450 million in 2016 have any impact on your opinion of whether the estimated price of the dinosaur is reasonable?