Palaeontologists have discovered the fossil of a 43-million-year-old, four-legged predatory whale.

Palaeontologists* in Egypt have discovered the 43-million-year-old fossil of a whale species with four legs that would have been capable of walking on land and hunting in water.

The previously unknown species belongs to the Protecetidae, a group of extinct creatures that were part of an evolutionary* change in which mammals went from being land-dwelling herbivores* to sea-dwelling carnivores* over 10 million years.

The 3m-long predator has been named Phiomicetus anubis after the ancient Egyptian god of death, not just for its assumed hunting abilities but also because its skull resembles the god’s jackal* head. Anubis, the ancient Egyptian god of the underworld, is depicted as having the large ears and pointy head of a jackal. Picture: Scribe. The head of the ancient Egyptian god of death, Anubis, is doglike and resembles that of a jackal, as seen in this image. The predatory whale’s skull resembles Anubis’ mythical head and has inspired the name Phiomicetus anubis. Picture: file image.

Weighing about 600kg, it had powerful jaw muscles and amphibious* skills that would have let it prey upon creatures such as crocodiles and small mammals, as well as the calves of other whale species, the researchers said.

“It was a successful, active predator,” said Abdullah Gohar, a graduate student of vertebrate* palaeontology at Mansoura University. “I think it was the god of death for most animals that lived alongside it.”

The researchers spent over a decade studying fossilised fragments found in an area in the Fayoum Depression southwest of Cairo that is known as the Valley of the Whales because of the marine fossils unearthed there. The Fayoum Depression in southwest Cairo is known as the Valley of the Whales because of the marine fossils unearthed there. Picture: file image.

The excavation in 2008 and subsequent study of the creature’s skull, jaw, teeth, vertebrae and ribs are particularly significant in Egypt because they mark the first palaeontological discovery by an all-Arab team.

Dr Hesham Sallam, associate professor and founder of the university’s vertebrate palaeontology centre, said that Phiomicetus anubis “would have had four sturdy legs, not fins, with bones that could have supported its weight to walk on land.”

“The attachment between the skull and the mandible (jawbone) are really, really broad, which means that the jaw muscles would be dense and very powerful,” Dr Sallam said. “The teeth were also sharp with molars*, which means it was capable of chewing and biting very strongly. It would have been the apex predator* in its environment.” 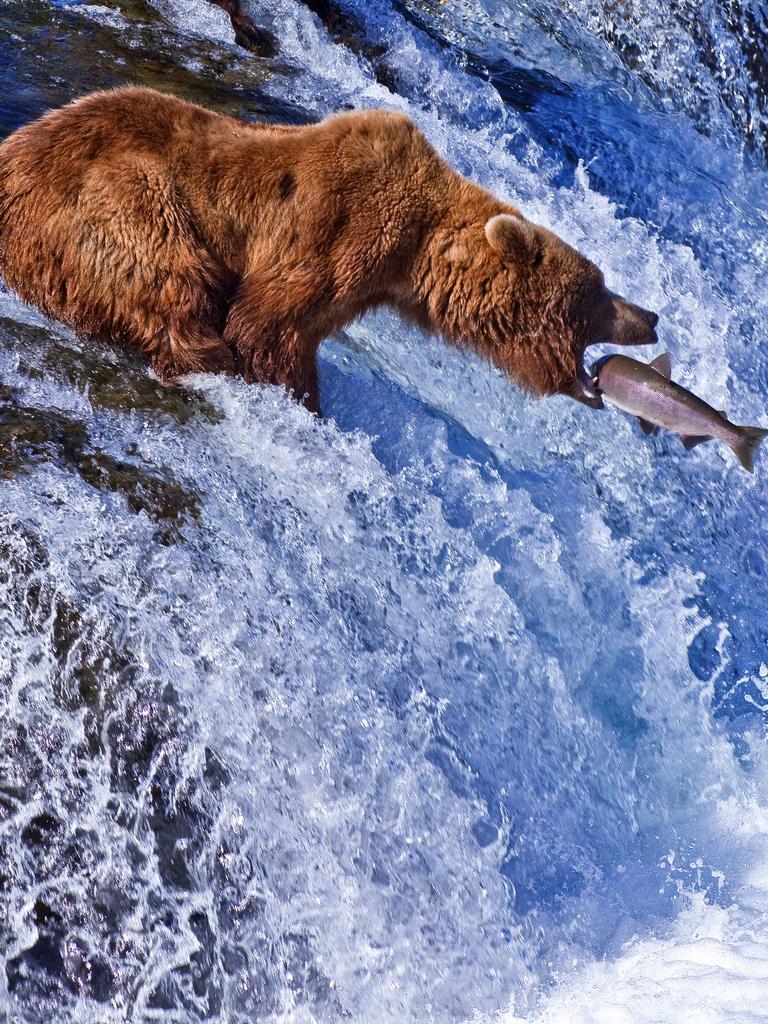 A feast fit for a king – or at least for an apex predator like this grizzly bear. Charles Darwin thought it was possible a huge marine creature may have evolved from land mammals, after observing that bears could swim and feed with their mouths open. Picture: file image.

Although today’s whales live in the water, their ancestors started out on land and evolved into sea creatures during the Eocene epoch, between 56 million and 33.9 million years ago.

“Over about 10 million years, the ancestors of whales transformed from herbivorous, deer-like, terrestrial* mammals into carnivorous and fully aquatic cetaceans*,” the researchers wrote this week in the journal Proceedings of the Royal Society B.

Charles Darwin (1809-1892), whose theory of natural selection founded modern evolutionary theory, suggested that a marine creature “as monstrous as a whale” may have evolved from land mammals after noting that bears could swim and feed with their mouths open. He was ridiculed for the suggestion at the time.

The earliest known whale, the four-legged Pakicetus attocki, was a wolf-sized mammal that lived close to water about 50 million years ago in what is now Pakistan. Its closest living relative on land is the hippopotamus. The hippopotamus is the closest living land relative of the Pakicetus attocki, a wolf-sized mammal that lived close to water about 50 million years ago. Picture: file image.

The discovery of P. anubis sheds more light on whale evolution, according to Jonathan Geisler, an associate professor of anatomy at the New York Institute of Technology, who was not involved.

“This fossil really starts to give us a sense of when whales moved out of the Indo-Pakistan ocean region and started dispersing across the world,” Dr Geisler told the website Live Science.

This story was originally published in The Times and is republished here with permission.

CLASSROOM ACTIVITIES
1. Create your own animal
This latest fossil find, of a whale ancestor that used to be land-based, shows us the evolution of animals over time. Choose two different types of animals that exist now, to join together and combine their features to create a new type of animal that could have existed millions of years ago.

Sketch your new animal, name it and label its features on your diagram.

2. Extension
This whale creature is referred to as the ‘god of death’. List the features of this whale species that have led researchers to give it this name: