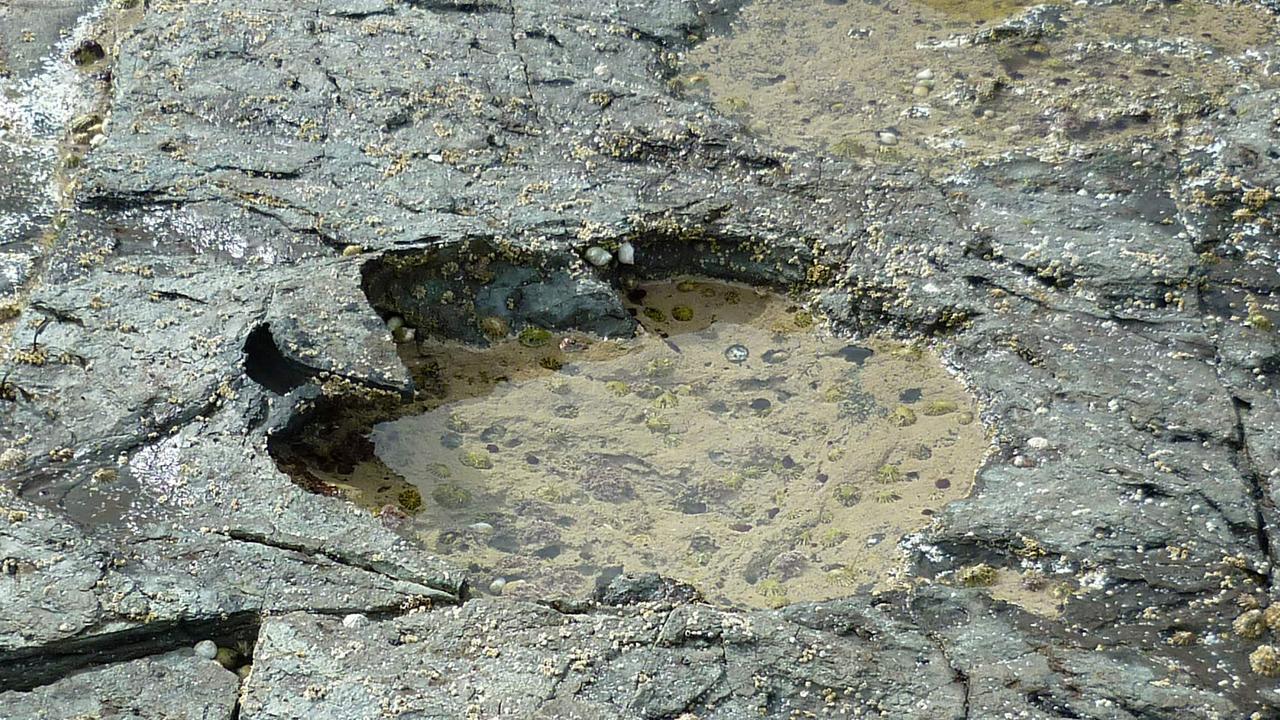 This undated image shows the side-angle view of a sauropod footprint on the Isle of Skye, Scotland. Picture: AFP /The University of Edinburgh/Jon Hoad

Dinosaurs bigger than a double-decker bus roamed the Isle of Skye in Scotland 170 million years ago, scientists have revealed.

Dozens of footprints of early sauropods — some of the largest animals to walk the planet — were unearthed* in a lagoon on the remote Scottish hideaway, The Sun reports. Dinosaur footprints dating back 170 million years have been discovered on the Isle of Skye. Picture: AFP/The University of Edinburgh.

Others were made by the older theropod cousins of T-Rex as herds* splashed about in the muddy shallows.

It suggests that far from being strictly land based, they waded into the water for food.

Edinburgh University’s Dr Steve Brusatte led the field team.  He said of the rare Middle Jurassic* find: “The sauropods were more than 49 feet (15m) long and weighed more than 10 tonne. Scientists hope the discovery of the footprints will help shed light on the reptiles’ evolution. Pictrure: AFP/The University of Edinburgh/Jon Hoad.

“It appears as if these tracks were made in shallow water — so the dinosaurs look like they were probably wading*.

“The water may have been quite shallow — maybe only a few feet deep or even less.

“It’s hard to say exactly why these dinosaurs were in the lagoon — but we seem to be finding more and more footprints of lagoon-dwelling dinosaurs these days.”

The Scottish island is famous for its dramatic landscapes, some carved during the age of the dinosaurs. It was recently voted the most desirable place in Britain to live.

This article was originally published by The Sun and is republished with permission.

unearthed: find something in the earth by digging

Middle Jurassic: relating to or denoting the second period of the Mesozoic era, between the Triassic and Cretaceous periods.

List all of the things that scientists have learned about the dinosaurs of Scotland.

Extension: What do you think the footprints of a sauropod looked like? Use the information in the story and your imagination to draw or make a set of sauropod footprints. Decorate them if you want or create an artwork based on them.

In the story, you have read that the Isle of Skye was voted the most desirable place in Britain to live. Think about a place that you love. Write a story about this place or create a drawing or artwork that shows why you think that this place is the best.

Extension: What’s your favourite dinosaur? Find out more about it an create an interesting infographic about your dinosaur. An infographic is a visual design that shows important or interesting facts.