A reconstruction of the dinosaur that left the fossilised tracks in southern Queensland compared to a human and a silhouette of a T-rex. Picture: University of Queensland

The gigantic dinosaurs once roamed the lands that now are home to Toowoomba, Oakey and Ipswich in Queensland, new research has revealed.

The University of Queensland study, led by palaeontologist* Dr Anthony Romilio, looked at southern Queensland dinosaur footprint fossils* dated to the latter part of the Jurassic Period*, between 165 and 151 million years ago. 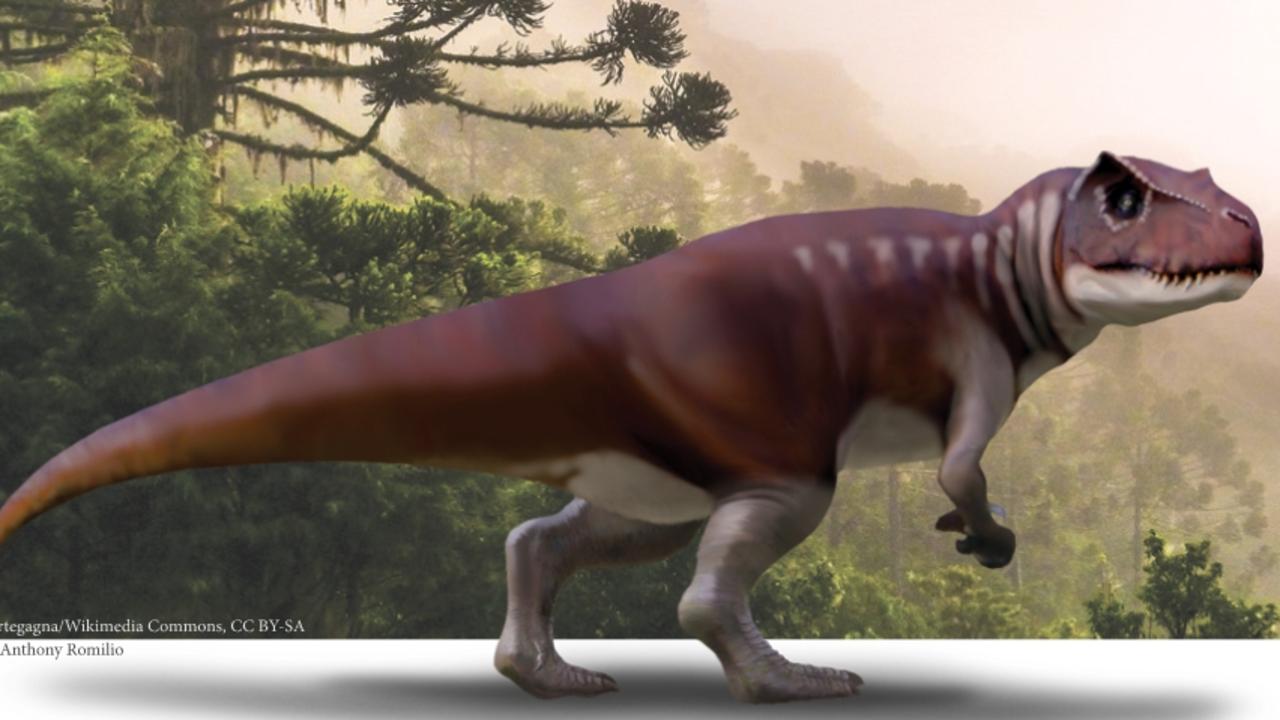 Scientists believe the Australian meat eater looked like this based on the fossilised footprints found in southern Queensland. Picture: University of Queensland

“But I think we’ve found them, right here in Queensland.

“The specimens* of these gigantic dinosaurs were not fossilised bones, which are the sorts of things that are typically housed at museums.

“Rather, we looked at footprints, which, in Australia, are much more abundant*.

“These tracks were made by dinosaurs walking through the swamp-forests that once occupied much of the landscape of what is now southern Queensland.”

Most of the tracks used in the study belong to theropods*, the same group of dinosaurs that includes Australovenator, Velociraptor, and their modern-day descendants, birds.

University of Queensland senior lecturer Dr Steven Salisbury said there had been hardly any fossils ever found in the southern hemisphere.

“What’s happening in Australia is really exciting, and to see that there were, in Australia at that time, really big meat-eating dinosaurs is cool,” he said.

“It indicates that there’s a good chance of finding more fossils in rocks of this age in Queensland.”

Dr Salisbury said it was very likely that there were many other fossils within the state that had been overlooked.

“A lot of the time rocks and coal just get dug out of the ground and put into trucks and hauled off somewhere without anyone paying any attention,” he said.

“It may well be that there are quite a lot more fossils out there, I would be highly surprised if there weren’t any more.” One of the fossilised dinosaur footprints discovered in a mine near Oakey, Queensland, along with a false-colour deep map on the right. Picture: University of Queensland

Dr Romilio said these were clearly not bird tracks.

“Most of these footprints are around 50-60cm in length, with some of the really huge tracks measuring nearly 80cm,” he said.

“We estimate these tracks were made by large-bodied carnivorous dinosaurs, some of which were up to 3m high at the hips and probably around 10m long.

“To put that into perspective, T-rex got to about 3.25m at the hips and attained lengths of 12-13m, but it didn’t appear until 90 million years after our Queensland giants.

“The Queensland tracks were probably made by giant carnosaurs* — the group that includes the Allosaurus.

“At the time, these were probably some of the largest predatory dinosaurs on the planet.”

Despite the study providing important new information about Australia’s prehistoric* past, the fossils are not a recent discovery. “The tracks have been known for more than half a century,” Dr Romilio said.

“They were discovered in the ceilings of underground coal mines from Rosewood near Ipswich, and Oakey just north of Toowoomba, back in the 1950s and 1960s.”

He said most were left in museum drawers for decades, waiting to be rediscovered.

“Finding these fossils has been our way of tracking down the creatures from Australia’s Jurassic Park,” Dr Romilio said.

The research has been published in the journal Historical Biology.

CLASSROOM ACTIVITIES
1. Footprint facts
On a large sheet of paper or card, sketch a dinosaur footprint that is the shape and size of the fossils found in southern Queensland. Carefully cut your shape out, then fill your footprint with facts (written in your own words) about Australian dinosaurs.

2. Extension
Do some research to find out the size and shape of the footprints left by some modern-day Australian animals. Draw their footprints at the correct size. Quiz a classmate to see if they can identify the prints.

HAVE YOUR SAY: What would you name Australia’s meat-eating dinosaur?
No one-word answers. Use full sentences to explain your thinking. No comments will be published until approved by editors.