FOUR little sea creatures have decided that Melbourne is a “turtley awesome” place to call home for the next year.

The baby flatback sea turtles took to the sky, flying Qantas from the Sunshine Coast to their new habitat at Sea Life Melbourne.

And it was fitting that they boarded their flight on Tuesday, May 23 — World Turtle Day.

As part of the Sea Life aquarium conservation project running across Australia, the turtles will be hand-raised before being released into the wild in an attempt to save the species.

Exhibit manager Dylan White said the flatback sea turtles were a vulnerable* species and action needed to be taken now before their numbers declined further. 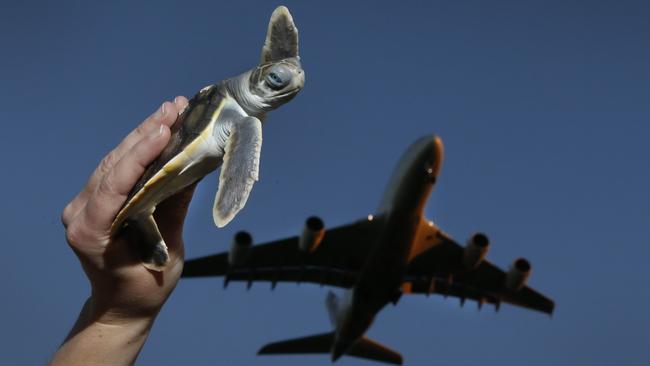 “A major threat to all sea turtles is plastic pollution — where possible, refuse one-use plastic such as straws and coffee cups to help minimise the impact of marine debris,” Mr White said.

When they prepare to take off again, each turtle will be fitted with a miniature satellite tracking device that provides critical information about their movements when they’re in the ocean.

The four hatchlings, weighing barely 100g each, will be in quarantine* for a month before moving into their new habitat in time for the winter school holidays.

vulnerable: in need of protection and help

quarantine: a place where animals are held when they first arrive somewhere new

The following sentences have been started.
Your job is to finish them off by using information from the article to make the sentences factual and informative.

The number of flatback sea turtles…

We can help flatback sea turtles…

Once back in the wild…

Write an acrostic poem on the word ‘turtle’.

Find out the differences between a turtle and a tortoise and write a sentence to explain them.

A name fit for a turtle

The four turtles heading for Sea Life Melbourne don’t have names yet.
Try and come up with a unique name for each turtle, as well as a sentence or two to describe the personality traits or features that you thought of when naming each turtle.

TINY BATS HAVE A BIG JOB