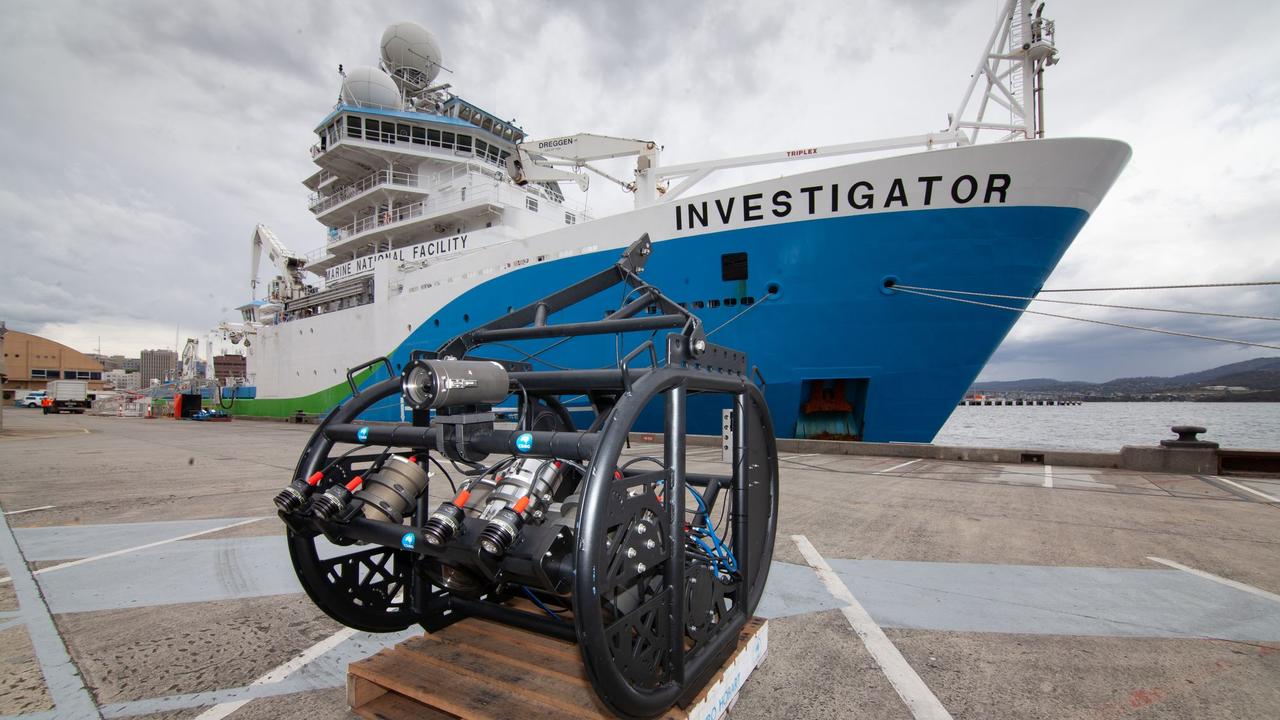 The deep tow camera system in front of the RV Investigator. Picture: CSIRO

Scientists have filmed five bigfin squid in the Great Australian Bight, the first time they’ve been seen in Australian waters.

The squid were filmed at depths of 2-3km during two deep-sea survey voyages led by Australia’s national science agency, CSIRO.

Marine scientist Deborah Osterhage of the CSIRO was on both voyages and said sightings of bigfin squid are very rare.

“These are the first records in Australian waters, adding to only a dozen confirmed sightings worldwide,” Ms Osterhage said.

“Most previous reports have been of single bigfin squid, so it’s exciting to have recorded five in the Great Australian Bight.”

The Great Australian Bight is the area of ocean off the coast of South Australia and the southern coast of Western Australia.

The five squid looked different to one another, which is how the scientists were able to confirm they were five separate individuals, rather than the same squid multiple times.

Although the surveys covered a large area, the squid were found clustered close together.

Little is known about big cephalopods* because, until recently, it has been impossible to observe them in their natural deep-sea habitat. Scientists have relied on studying injured or dead animals accidentally caught by fishing boats.

“After spotting bigfin squid in the towed camera footage* we were really on the lookout for them during the subsequent ROV voyage,” Ms Osterhage said.

“The ROVs were controlled by operators on the ship, and scientists were able to direct what was filmed.

“We were very excited to see the bigfin squid again and obtain this extraordinary footage.

“It has enabled us to learn more about this elusive* and intriguing* deep-sea squid.

The scientists directed lasers onto the body of the squid to measure it. Previously, the only way to measure was by comparing them to nearby objects. One squid was more than 1.8m long with arms and tentacle filaments* more than 11 times its body length. The body was only about 15cm long.

“We also observed their colour and behaviours, including filament coiling, a behaviour not previously seen in squids.”

Prior to these voyages almost nothing was known of animals living in the benthic zone — the zone near the sea floor — in the deepest parts of the Great Australian Bight.

“With every voyage we undertake we discover more about Australia’s vast deep-sea environment, and there is much to learn,” Ms Osterhage said.

The research is published in the journal PLOS ONE with authors from CSIRO and Museums Victoria.

ABOUT BIGFIN SQUID
Bigfin squid belong to the family Magnapinnidae, a group of deep-sea squid with large fins and extremely long, slender arm and tentacle filaments.

Bigfin squid tentacles are unique to these creatures and look like spaghetti.

The tentacles are covered in microscopic* suckers that make them very sticky.

CLASSROOM ACTIVITIES
1. Find the Facts
Little is known about the bigfin squid as until recently it has been difficult to observe them in their natural environment.

The article does give some known facts about the bigfin squid that they have learnt from these sightings and from finding them in accidentally caught by fishing boats.

Draw a labelled diagram of the bigfin squid in the middle of an A4 page and write the facts that are known about this animal around it. Include where they have been found, how deep they live, their size and any other details you can find in the article. At the bottom of your page, write 3 questions you still have about this animal.

2. Extension
Welcome to Australian Waters
The bigfin squid, may be a regular to Australian waters, however this is the first confirmed sighting of them.

Write a short letter to the squid, welcoming them to the Great Australian Bight. Let them know what other amazing sea creatures they may come across (possibly whales as well as other creatures) and warn them about some of the dangers. (Sharks and fishing nets!) You could explain where they are in Australia and where they could go for some warmer water. You may think of other interesting things to let them know about.

You can be as creative and comical as you like in your letter.

VCOP ACTIVITY
A Journey with Deborah Osterhage
Imagine you were invited on the voyage with marine scientist, Deborah Osterhage. Write a journal entry from the day before your journey under the sea and the day of your journey. How were you feeling after being given the task of directing the ROV through Ms Osterhage’s instructions? Did you need to prepare by operating some remote-controlled cars or warming up your thumb muscles? What was it like controlling the ROV? Did you follow instructions well? Were there any problems during the voyage?

Try and include as much detail as possible so we can imagine along with you, use facts from the article to make it realistic, but it is a narrative so have a but of fun as well.

HAVE YOUR SAY: What is your favourite deep-sea creature?
No one-word answers. Use full sentences to explain your thinking. No comments will be published until approved by editors.