A terrifying river “monster” was so big, so powerful and so different scientists believe it could topple T-rex as the most famous and exciting meat-eating dinosaur.

Spinosaurus aegyptiacus hunted prey across the Sahara Desert 95-100 million years ago and is the first aquatic* dinosaur known to science.

This 6-7 tonne predator is believed to have been an excellent swimmer.

It would’ve been propelled by a huge finlike tail, allowing it to hunt for prey in what were once vast river systems across the Sahara.

Fossil experts say it’s the first time such an adaptation* has been reported in a dinosaur.

“The Spinosaurus’ finlike tail is a game changing discovery for us that fundamentally alters our understanding of how this dinosaur lived and hunted – it was actually a ‘river-monster’,” said Dr David Unwin, of the University of Leicester, UK.

“As well as its tail, many other features of this dinosaur, such as the high position of the nostrils, heavy bones, short legs, and paddle-like feet point to a life spent in the water rather than on land.

“Not only did dinosaurs dominate the land and take to the air as birds, they even went back into the water and became the top predators there as well.”

Lots of aquatic reptiles lived during the time of the dinosaurs, including crocodiles, plesiosaurs and mosasaurs.

But this is the first dinosaur believed to have lived an aquatic lifestyle.

The dinosaur grew to 15m long and would’ve sported a set of large, sharp teeth for gobbling prey.

Spinosaurus was still able to move on land and lay eggs there, perhaps walking on four legs rather than two like other meat-eating dinosaurs.

The anatomy of Spinosaurus had remained a mystery because important fossils were destroyed during World War II, until the 2008 discovery of a skeleton in the Kem Kem river beds in southeastern Morocco. This area is well known for preserving long-extinct Cretaceous* creatures. Additional tail bones have been dug up since 2015. 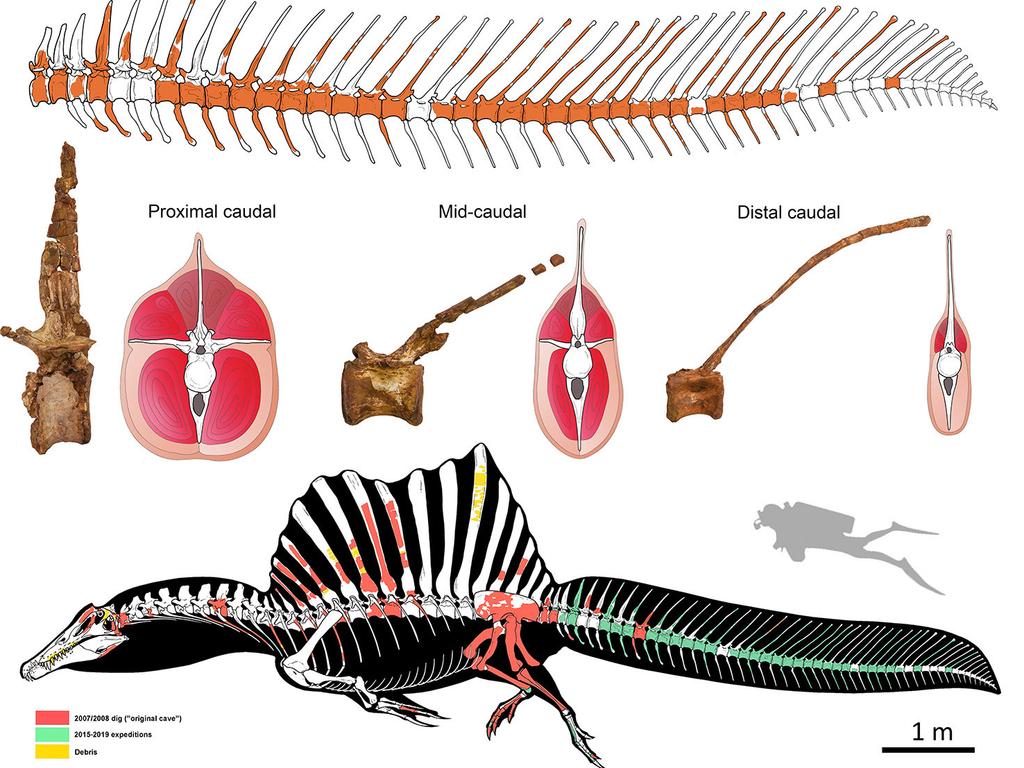 Scientists mapped the bones to reveal the full size and shape of a living Spinosaurus aegyptiacus. Picture: University of Portsmouth

Its tail was flexible with a large surface area thanks to a series of tall spines.

Researchers made a plastic model of a spinosaurus tail and attached it to a robotic swimming device, showing that the tail could move laterally* to create thrust and power the animal through water like a crocodile, said Harvard University fish biologist and biomechanist* George Lauder, a study co-author.

This indicates Spinosaurus terrorised rivers and river banks as a semiaquatic animal, not merely wading into the water waiting for fish to swim by. It may have eaten huge fish, including sharks.

“This discovery overturns decades-old ideas that non-bird dinosaurs were restricted to terrestrial* environments,” said Harvard University vertebrate* palaeontologist* and biomechanist Stephanie Pierce, a study co-author. “So, yes, we believe that this discovery does indeed revolutionise* our understanding of dinosaur biology.”

“It just might topple T-rex,” Pierce said, “as the most famous and exciting meat-eating dinosaur.”

“One thing that still puzzles me though, is why only Spinosaurus became aquatic among the dinosaurs,” said David Martill, Professor of Palaeobiology at the University of Portsmouth, UK.

“Why are there no aquatic iguanodons, or stegosaurs?”

The results of the Spinosaurus study were published in the journal Nature. 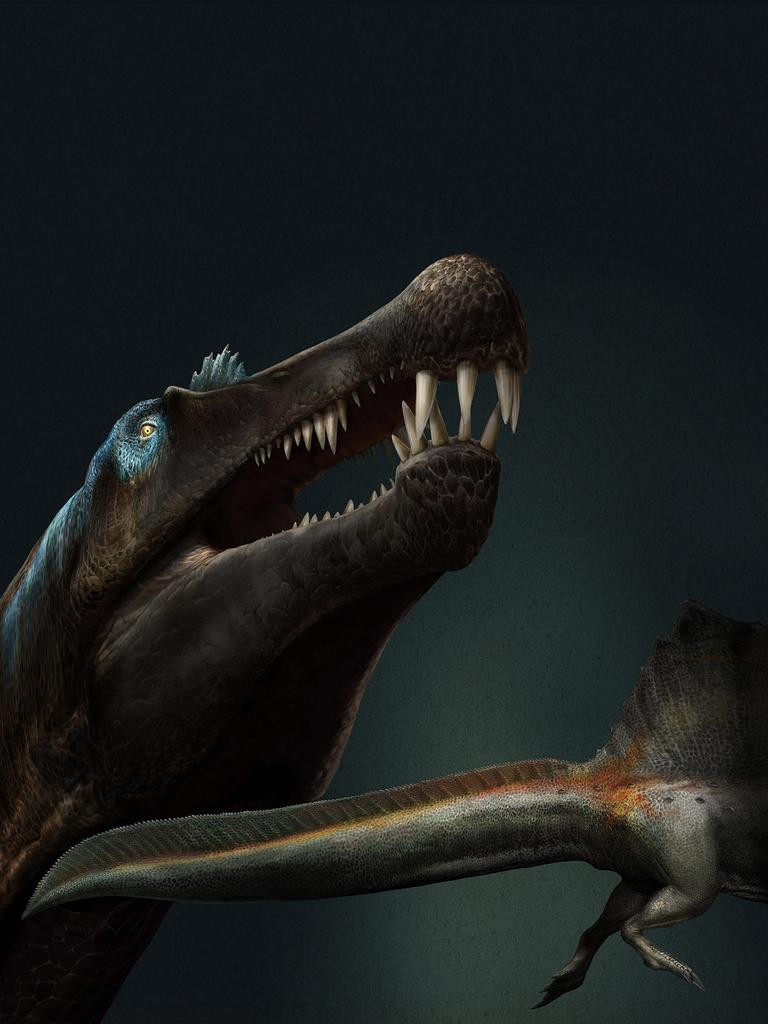 An artist’s illustration of the terrifying creature. Picture: University of Portsmouth/Davide Bonadonna

CLASSROOM ACTIVITIES
1. Could Dinosaurs and People Share the Earth
Reading the Kids News article about the Spinosaurus aegyptiacus and knowing some facts about other dinosaurs, could dinosaurs and people coexist on Earth?

Work with a partner and brainstorm some ideas about this theory under the headings below.

2. Extension
“One thing that still puzzles me though, is why only Spinosaurus became aquatic among the dinosaurs.” Why do you believe this was the case? Share your ideas with a partner.

HAVE YOUR SAY: Describe an unknown creature from your imagination you would like to discover.
No one-word answers. Use full sentences to explain your thinking. No comments will be published until approved by editors.