A three-month-old teckel dog practising puppy dog eyes to get humans to give her what she wants. Picture: Getty Images

Sad, puppy dog eyes could have evolved* because humans couldn’t resist them.

New research suggests that over thousands of years of domesticating* dogs, people preferred pups that could pull off that appealing look. And that encouraged the development of the facial muscle that creates it.

Today, dogs use the muscle to raise their eyebrows and make the babylike expression. That muscle is as good as absent in wolves. “You don’t typically see such muscle differences in species that are that closely related,” said Anne Burrows of Duquesne University in Pittsburgh in the US, an author of the study released on Monday by the science journal Proceedings of the National Academy of Sciences.

Dogs differ from wolves in many ways, from having shorter snouts, smaller sizes and more expressive faces. And unlike wolves, dogs rely on human eye contact, whether to know when someone’s talking to them or when they can’t solve a problem, like jumping a fence or getting out the door.

Dr Burrows and her colleagues studied the eye muscles in six dogs and two wolves. They found dogs have a meaty eye muscle to lift their eyebrows and make puppy dog eyes. But in wolves, the same muscle was stringy or missing. 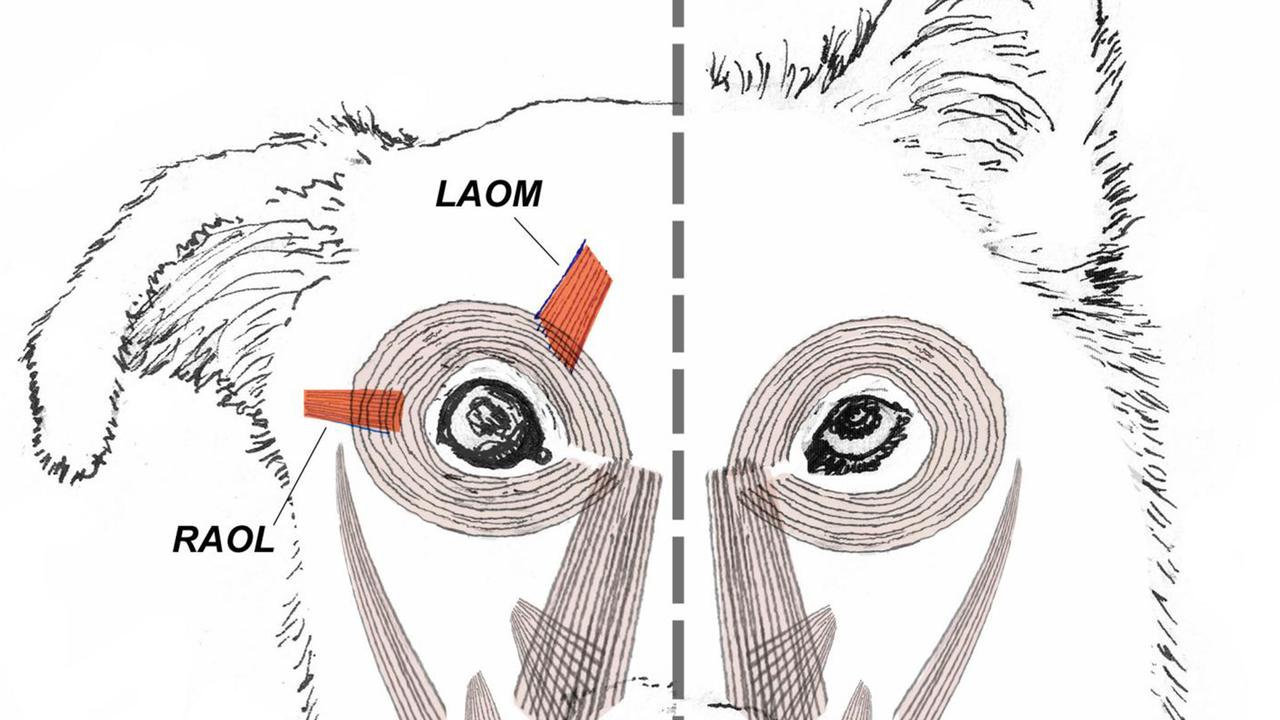 A comparison between dog (left) and wolf (right) face muscles. The muscles around the eyes (orange bits) in dogs that pull the eyes into the “puppy dog eyes” expression are missing or underdeveloped in wolves. Picture: Tim Smith via AP

The scientists also recorded 27 dogs and nine wolves as each stared at a person. Pet pooches frequently and intensely* pulled back their eyebrows to make sad expressions, while the wolves rarely made these faces, and never with great intensity*. A female red wolf emerges from her den sheltering newborn pups at the Museum of Life and Science in Durham, North Carolina, US. Picture: AP

The researchers believe dogs, over their relatively short 33,000 years of domestication, used this eye muscle to communicate, possibly goading* people to feed or care for them — or at least take them out to play. And people, perhaps unknowingly, gave in.

Dog experts not involved with the study were impressed.

“The implications are quite profound,” said Brian Hare from Duke University in the US, who edited the article. Professor Hare wrote in an email that these muscles almost certainly developed because they gave dogs an advantage when interacting with people, and people have been unaware of it.

“The proof has been in their puppy dog eyes all this time!” he said. 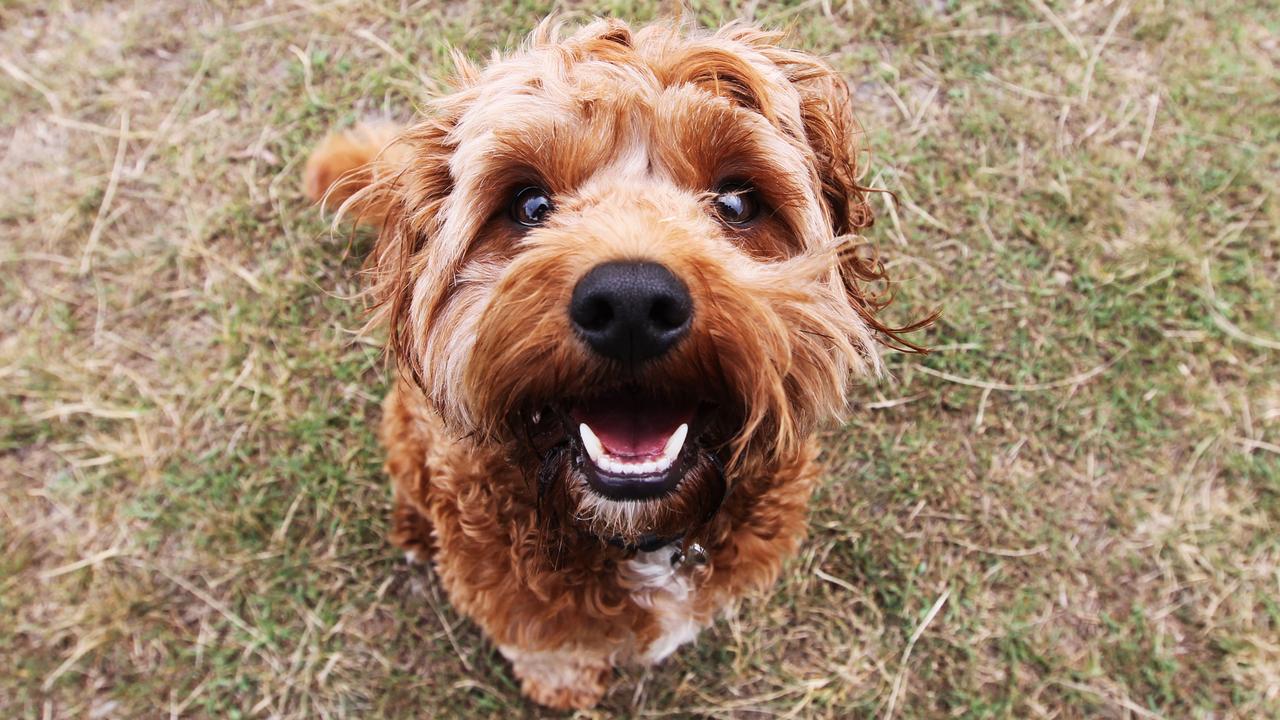 Could you resist giving Buddy anything he wants?

Evan MacLean at the University of Arizona, US, called the findings fascinating, but warned that the muscle difference could be a result of other changes rather than a specific response to human influence. Clive Wynne of the Canine Science Collaboratory at Arizona State University, US, said: “Kudos* to the researchers for thinking of a cool way to investigate an important aspect of dogs’ success” with humans.

But he noted that the study has a few possible problems, particularly the small sample size — only five dog breeds were examined and videos were mainly of Staffordshire bull terriers — and the lack of background information about each animal.

“Did these wolves regularly meet people bearing gifts that might be worth asking for with an endearing face?” he asked.

VIDEO: Meet Alfie, a British bulldog from Sydney with a very grumpy face

Researchers find dingoes are not dogs

CLASSROOM ACTIVITIES
1. Puppy Dog Eyes
Use the detailed description provided in the Kids News article to sketch a dog compared to a wolf, putting particular effort and emphasis into the eyes. You should try and draw your dog with ‘puppy dog’ eyes and the wolf with staring, scary eyes.

Compare your sketch/drawing to your classmates and note similarities and differences and talk to each other about how you created the ‘puppy dog’ eye effect.

2. Extension
Work with a partner and list the reasons why a small sample size in a research study such as this affects how accurate the study is.

VCOP ACTIVITY
Puppy Eyes are so powerful, that we use the term to refer to other humans making an endearing ‘please’ or ‘forgive me’ face. Have you ever used or seen someone using ‘puppy dog eyes’ as a way of communicating?
What was it used for?
Did it work?
Turn to a partner and show them your best ‘puppy dog eyes’

HAVE YOUR SAY: Have you seen a dog do this? What about other animals? Do you think humans do this too? Describe what you would do to your facial muscles to try to convince someone to do something.
No one-word answers. Use full sentences to explain your thinking. No comments will be published until approved by editors.