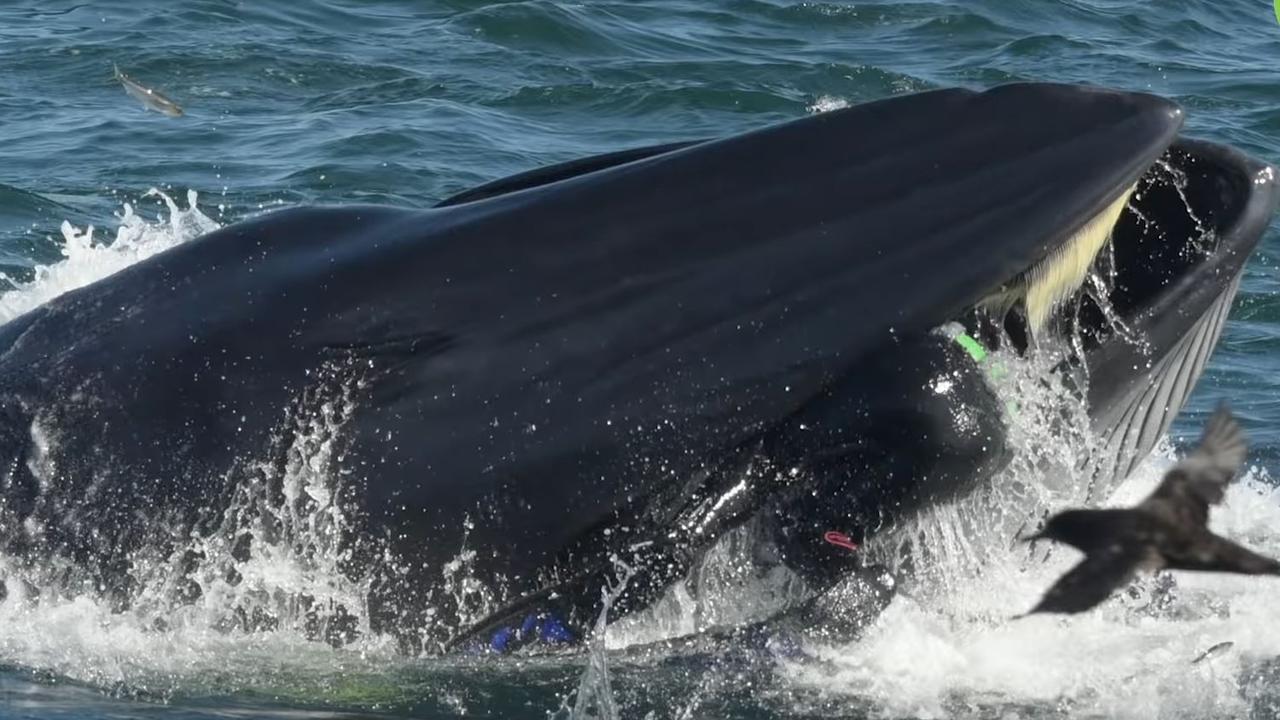 A dive tour operator has almost been swallowed by a whale and lived to tell the tale.

South African Rainer Schimpf had been filming a sardine* run — where gannets*, penguins, seals, dolphins, whales and sharks gather fish into bait balls. As he was snorkelling on the surface of the water off South Africa’s Port Elizabeth Harbour, a Bryde’s whale emerged with its jaw open, swallowing him headfirst. A Bryde’s whale in the ocean. Picture: supplied

“I was trying to get a shot of a shark going through the bait ball, and then the next moment it got dark and I felt some pressure,” Mr Schimpf said. “(That’s) when I instantly knew, a whale had grabbed me.

“I could feel the pressure on my hip — there is no time for fear in a situation like that — you have to use your instinct*,” he said.

“Once you’re grabbed by something that’s 15 tonnes heavy and very fast in the water, you realise you’re actually only that small in the middle of the ocean,” he told Sky News.

Mr Schimpf, 51, said he and two others had been in the water for two or three minutes when the whale caught him.

“I was busy concentrating on the sharks because you want to know if the shark is in front of you or behind you, left or right, so we were very focused on the sharks and their behaviour — then suddenly it got dark.”

He estimated the whale was about 15m long. Rainer Schimpf who was caught in a whale’s mouth. Picture: Sky News UK

When the whale grabbed him, he said lots of thoughts raced through his mind.

“Once I felt something had grabbed me on the hip, I knew instantly it was a whale and my next thought was that, firstly, he can’t swallow me because I’m too big — so that was kind of an instant relief.

“Also I realised that the pressure (on my body) didn’t increase, it actually stopped at a certain point.

“So my next thought was that the whale may take me down into the ocean and release me further down, so I instantly held my breath.

“Obviously he realised I was not what he wanted to eat so he spat me out again.

“Whales are no man-eaters,” he said. “So this was really an accident. They are gentle giants.”

In almost 20 years as a dive tour operator, Mr Schimpf said such an experience was unusual because the whales would usually be spotted by divers before they made a dash for dinner.

“We were very astonished* that out of nowhere this whale came up,” he said.

CLASSROOM ACTIVITIES
1. Retell the story
Rainer Schimpf has recounted his perspective of this experience. But what do you think the whale thought of all this? Retell this event from the perspective of the whale. Imagine he/she was telling his/her friends. What did he/she see, feel, hear, taste? What did the other sea creatures say to him/her? How did he/she know to spit Mr Schimpf out?

2. Extension
Rainer Schimpf is quoted as saying this experience has made him realise just how small humans are.
How does our size compare to the other marine creatures at this sardine run?

Create a graph to show how the average human adult compares in size to sardines, gannets, penguins, seals, dolphins, whales and sharks. The article does not mention which species of these creatures were there, so it is fair to make an educated guess and use the average size of a species likely to be in that vicinity (For example; it may have been the African penguin, the great white shark, etc)

Decide on a scale for your graph that will allow you to show the size of the largest and smallest creature. Make sure you label your graph with the name of the species you have used.

HAVE YOUR SAY: What do you think it would look, feel and smell like inside a whale’s mouth?
No one-word answers. Use full sentences to explain your thinking. Comments will not show until approved by editors.