The spectacular discovery of two giant dinosaurs apparently locked in mortal combat* is being investigated by an Australian geologist*.

The fossilised Tyrannosaurus rex and Triceratops were discovered tangled together, believed to have died during a ferocious duel before sinking into swamp flood plain in Montana in the US around 66 million years ago, the Late Cretaceous period.

“The Triceratops is reported to have teeth in its spine and pelvis* and the T-rex seems to have broken teeth and fractures that may be associated with trauma*,” James Cook University’s Associate Professor Eric Roberts said.

“Both are extraordinarily well-preserved — each specimen is among the most complete of its kind ever found. It’s arguably one of the most amazing dinosaur fossil discoveries ever.” 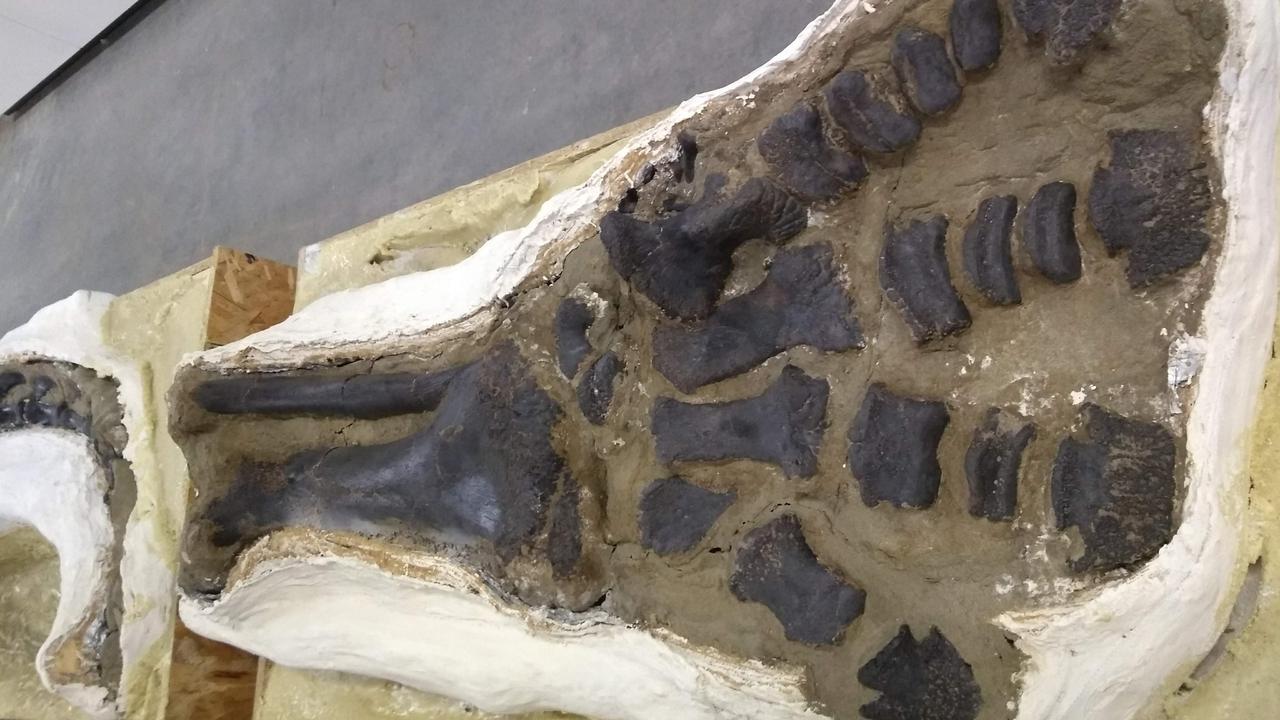 The foot of the triceratops. Picture: James Cook University

While the discovery was made in the US by fossil hunters in 2006, a long legal battle about whether the find was owned by the landowner or the mining right holder has only just been resolved.

Dr Roberts has done preliminary geological work on the site and intends to return next year as borders reopen to discover, along with student Stuart Hodgson, how the sandstone has preserved the huge animals in such complete form. Only part of the fossils have been unearthed so far, but the pair have been bought by a non-profit group and donated to the North Carolina Museum of Natural Sciences in the US for an undisclosed* price, believed to be at least several million dollars.

“The project will take several years to complete, because most of the fossils are still entombed* in rock matrix* that must be carefully prepared at the museum before we can fully examine them and test the hypothesis* of these as duelling dinosaurs.”

The fossils are set to be housed at the North Carolina Museum of Natural Sciences and will be studied in a palaeontology* lab due to open in 2022. mortal combat: fight until one or both die

pelvis: lower part of the abdomen above the legs

matrix: a mass of fine-grained rock in which gems, crystals, or fossils are embedded

hypothesis: idea to be tested

Which two dinosaurs were fighting?

How long ago did they live?

Where were they found and when?

Why is a geologist working on this?

What leads the scientists to believe they were fighting?

CLASSROOM ACTIVITIES
1. Make Your Own Dinosaur Skeleton
Using these inspirational fossil pictures of duelling dinosaurs, create your own dinosaur skeleton. You could use materials such as matchsticks, toothpicks, pasta, cardboard or clay. You can choose to do a single dinosaur or more than one as seen in the fossils in the Kids News article.

Display your dinosaur skeleton on black paper so it stands out.

2. Extension
What do you think these dinosaurs were fighting about?

Which dinosaur do you think would have won the fight?

How could large creatures such as dinosaurs live harmoniously on Earth together?

Discuss these questions with a partner.

Adjectives
An adjective is a describing word. They are often found describing a noun. To start with look at the words before the nouns.