Critically endangered orange-bellied parrot flies back from brink of extinction Five years ago, biologist Shannon Troy was in tears in remote bush in Tasmania’s South-West.

Working in the World Heritage Area at Melaleuca on the recovery program for the orange-bellied parrot, Dr Troy was sad and emotional because the massive efforts over many years to save the critically endangered parrot species from extinction in the wild appeared to be failing.

At the end of counting that breeding season, there were only 17 parrots left in the wild, and just four were female and therefore capable of producing chicks.

“I was standing under a tree crying because they seemed to be going extinct right in front of us,” Dr Troy, wildlife biologist for the Orange-bellied Parrot Tasmanian Program, explained.

The lightweight 20cm-long parrot species had been the subject of a huge effort by scientists such as Dr Troy to bring it back from the brink*, but those good intentions – worth millions of dollars and paid for by federal and state governments and groups such as BirdLife Australia – were not succeeding.

Installing nesting boxes, tagging, monitoring, protecting habitat and introducing captive-bred parrots into the wild flock in the hope they would breed in the wild were doing little to slow or stop the species’ spiral* to extinction.

“They were scary times,” Dr Troy said. “At one point we got down to three breeding pairs.” 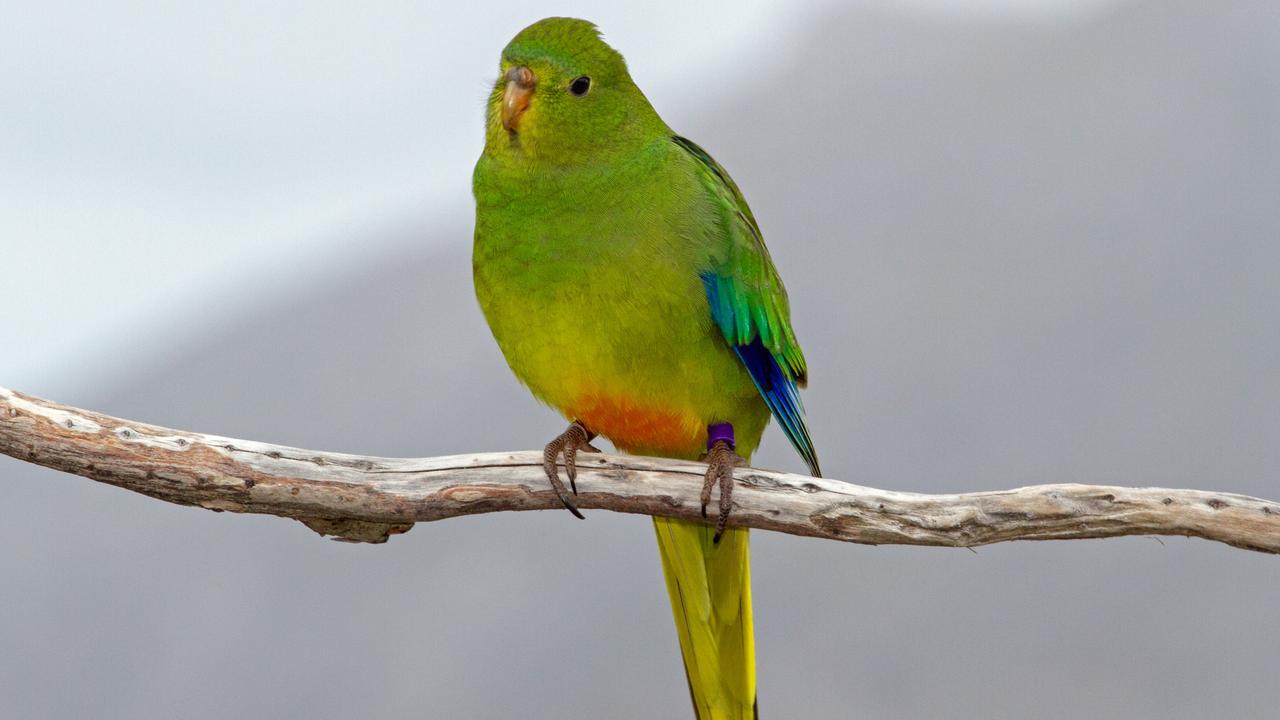 Five years on, however, and Dr Troy is grinning from ear to ear because after a couple of very productive breeding seasons, the species is in better health in population terms since counting began, with 192 parrots setting off on the annual migration from their Melaleuca breeding grounds at the end of summer, bound for interstate wetlands.

And this week the first of those parrots was identified to have arrived in Victoria.

When the parrots return to breed in Tassie at the end of the year, Dr Troy said more captive-bred birds would be released into the wild and it was hoped the population would spread out across the Melaleuca breeding range.

Last summer a few birds used nesting boxes 5km from Melaleuca and Dr Troy said she hoped that trend to spread out would continue as numbers increased.

Between 500 and 600 orange-bellied parrots have been bred in cages to ensure the species’ survival in captivity and to provide a backstop of new stock that can be released in the wild. She said when the Melaleuca grasslands were not burnt, buttongrass dominated and became too thick to allow the growth of tiny plants, such as lemon-scented boronia, that provide nutrients* for the parrots.

“The parrots don’t actually eat the buttongrass, they eat the plants that grow in-between and which are stimulated to seed by fire,” Dr Troy said. The Melaleuca landscape is thought to have been created by Tasmanian Aborigines regularly burning over thousands of years, known as firestick farming.

These bushfires are low intensity and not anywhere near as hot or destructive as forestry regeneration burns, which favour the regrowth of eucalypt species for commercial* return. Dr Troy is pushing for regular burn-offs in the area to continue the revival of the orange-bellied parrots.

VIDEO: Sait Rooks gives a tour of the orange-bellied parrot breeding enclosures in 2019

American city turns off lights to save birds

CLASSROOM ACTIVITIES
1. Orange-bellied Parrot Fact File
Complete a fact file information sheet detailing everything you know about this breed of parrot. Draw or sketch a picture to complete your fact file.

WHAT’S NEEDED FOR SURVIVAL OF SPECIES:

2. Extension
How could the ‘firestick farming’ method help the orange-bellied parrot species and the always present bushfire threat in Australia? Why do you think it isn’t done this way all the time?