A rare kangaroo, which has only been seen once in the past 90 years, has been photographed by a tourist on holiday in West Papua, Indonesia.

Michael Smith, 47, photographed the Wondiwoi tree kangaroo, which is on the top 25 “most wanted” lost-species-in-the-world list.

The animal has never been photographed before and was last spotted in Indonesia in 1928.

Mr Smith was on a two-week expedition* to find a new species of orchids* in West Papua when he turned his sights on the long-lost Wondiwoi tree kangaroo after seeing claw marks on trees.

The citizen scientist*, from England, was astonished when he spotted the creature on the last 30 minutes of the final day of his trek*, perched 30m up a tree. 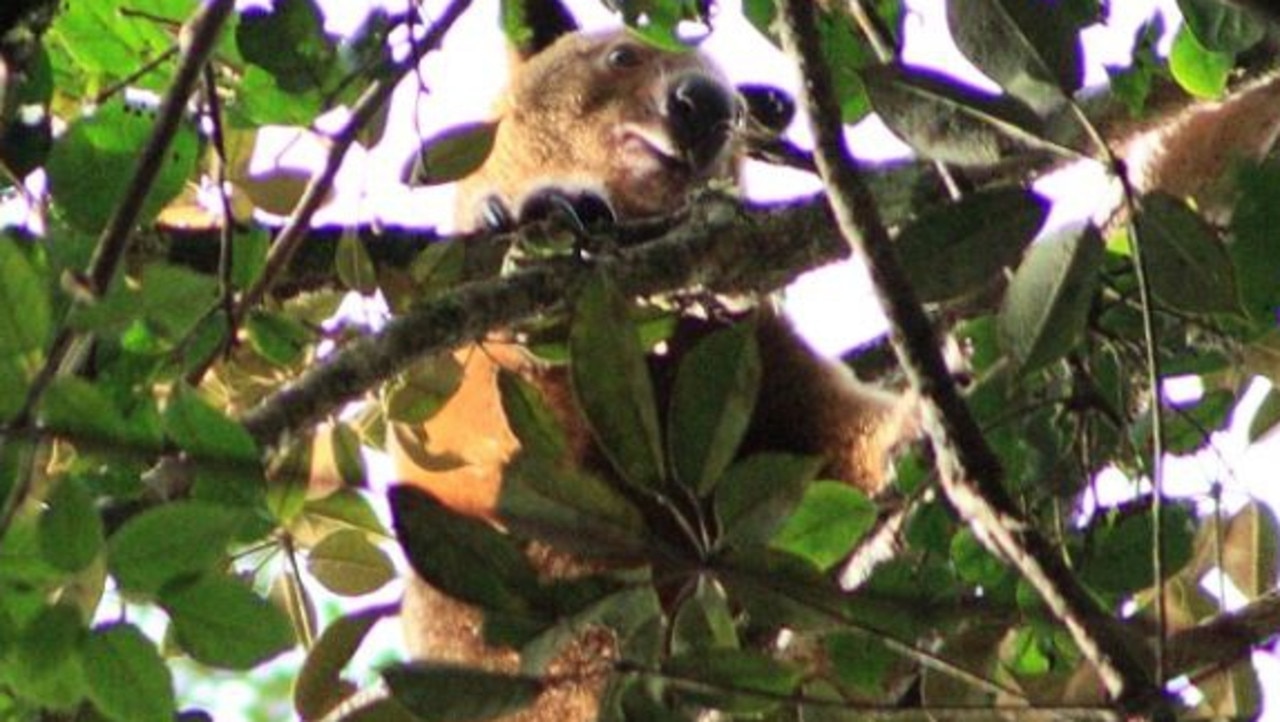 One of Michael Smith’s photos of the Wondiwoi tree kangaroo of Indonesia.

Experts had believed the species was extinct.

Mr Smith said: “It was hiding there, peeking down at us, trying to hide.

“I was really rushing around. I couldn’t quite get the photo. I was thinking calm down, this is a really, really rare species, it might be the last one.

“I needed to steady my hand and lean on something, but the thing I’m leaning against is covered in spines.

“But I was also thinking ‘I could be coming home with a lot of photos of a lot of leaves’.

“I was thinking to myself I have to be careful here and not fool myself, but I went through my mental* checklist of their features and realised ‘hang on, this has absolutely got to be the Wondiwoi tree kangaroo.’” Michael Smith was in West Papua, Indonesia, looking for orchids, when he saw the lost tree kangaroo.

Mr Smith plans to return next year with scientists to find more.

He also plans to apply for permits to allow him to bring back poo samples to the UK. Experts have already offered to DNA* match with the 1928 skeleton currently in London’s Natural History Museum.

Mr Smith travelled with a local guide, an interpreter* and four porters to help carry equipment and supplies.

He visited the same area a year ago to look at rhododendrons and orchids, which are both flowering plants. This year they trekked up Mount Wondiwoi to a camp they built last year at an altitude* of 700m.

Battling through bamboo jungle with machetes*, they cut further to an altitude of 1300m where they formed a second base camp using logs and tarpaulins*.

They spent days exploring the mountain to look at orchids but when they reached 1700m they spotted claw marks at the base of trees.

A few expeditions have been to the area but it is mostly unexplored due to the remote location and impenetrable* jungle on steep slopes.

“We started to see these claw marks at the base of trees and even I started to think ‘hang on’,” said Mr Smith.

“We were in the same area and we started to smell this funky* scent and saw tree kangaroo poo.”

On their last — seventh — day, they were returning to camp when he spotted a tree kangaroo on a branch 30m up, on July 31.

They surrounded the tree and stood in silence for 30 minutes while Mr Smith took photos.

This is a different species of tree kangaroo in a zoo. We think it’s cute and hope you do too!

WHAT IS A TREE KANGAROO

Like Australia’s kangaroos and wallabies, tree kangaroos are macropods*.

There are species of tree kangaroos in North Queensland. These are the largest tree-dwelling mammals in Australia.

Fourteen species of tree kangaroos live in the forests of Papua New Guinea, Indonesia and Australia.

They measure about 75-80cm long, not including their 40-to-86cm tails. They look like a cross between a kangaroo and a lemur. 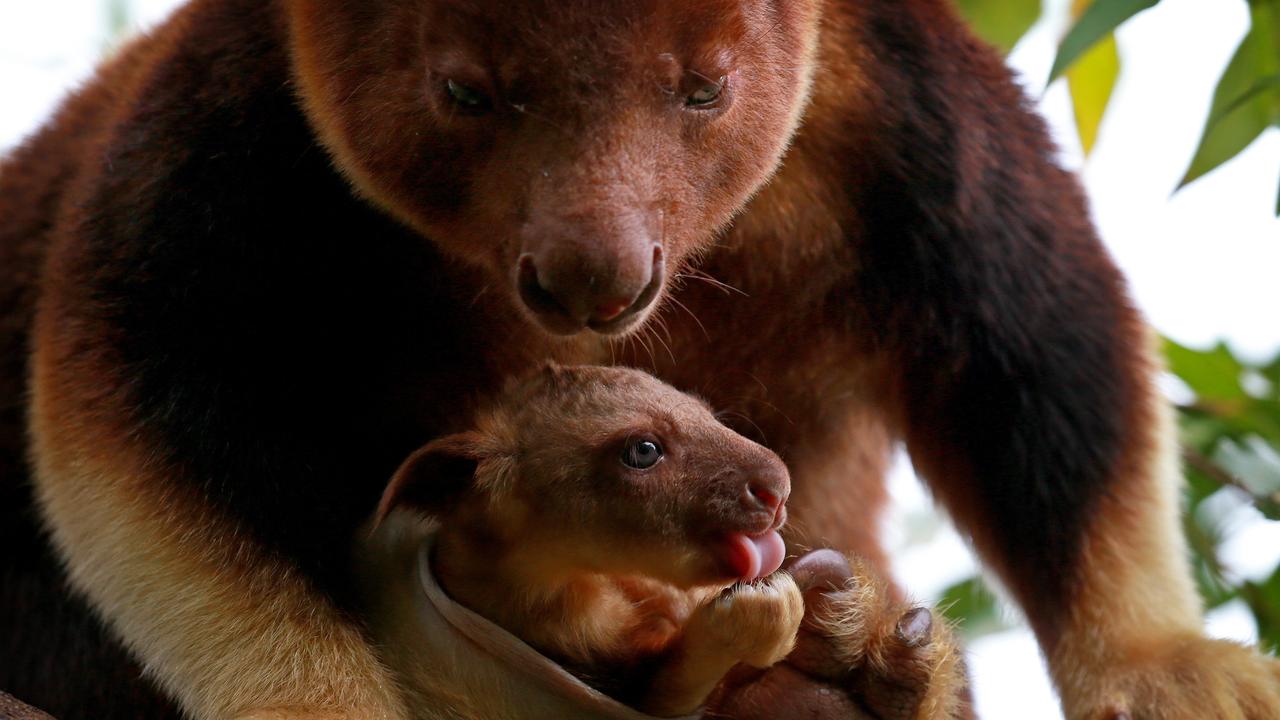 Taronga Zoo, Sydney, announced the arrival of a baby Goodfellows Tree Kangaroo joey earlier this year. The male joey was born to mum Kwikila last September and by March was starting to emerge from the pouch. Goodfellows tree kangaroos are from New Guinea and neighbouring West Papua, Indonesia, and are endangered. Picture: Toby Zerna

Macropods all used to live in trees but millions of years ago they came down to live on the ground. Tree kangaroos eventually went back up in the trees.

Most species of tree kangaroos are endangered because of hunting and their habitats being destroyed.

There are other tree kangaroos in Indonesia but they live at lower altitudes or in different mountain regions, and are a different colour.

This article originally appeared in The Sun and was reproduced with permission.

expedition: travel to somewhere difficult or a long way away

citizen scientist: is a scientist in their spare time

mental: in your mind

DNA: the information in cells that decides how we look and how our body works

altitude: how high above sea level, which is 0m altitude

tarpaulins: big piece of material to cover something

impenetrable: can’t get through it

1. When was the only other time this species is known to have been seen?

3. What will Mr Smith collect when he returns? Why?

4. How many tree kangaroo species are there and where?

Carefully read this news article and then retell the story from a first person point of view, that is, recount the events as if you are Michael Smith. This will require you to narrate the story using the words “I” and “we” instead of “he” and “they”. Make sure you capture the excitement Michael was feeling as he spotted and photographed the rare tree kangaroo.

2. Extension: Try writing a humorous version of these same events from the point of view of the tree kangaroo.

HAVE YOUR SAY: If you could go on an expedition to find something amazing, what would you look for and where? No one-word answers. Use full sentences.