CELEBRITY vet Dr Chris Brown has come face-to-face with sharks and given a rhino a pedicure but his new challenge is to wrangle local councils into making Australia pet friendly.

Pet ownership is in decline as rising costs and unfriendly regulations get between man and his best friends and it risks harming our health and our community, says Dr Brown.

A recent Animal Medicines Australia survey reveals pet ownership declined by 9 per cent between 2013 and 2016. Laws and rising costs of pets and their upkeep are the biggest deterrents to pet ownership. Dr Chris Brown told a national meeting of councils in Canberra this week that pet-friendly outdoor spaces was the most important factor in supporting pet ownership in Australia.

Dr Brown is concerned that the benefits of pet ownership, such as improved health and wellbeing, could be lost unless councils work with the community to make pet ownership more appealing.

“Pet ownership is in decline, we’re talking 200,000 cats have disappeared from the pet landscape in the past 12 months and 100,000 dogs which is quite surprising because people assume Australia is a pet-loving nation,” Dr Brown said. 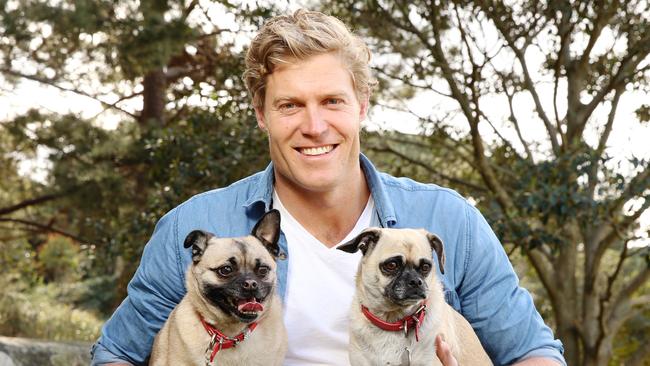 Having a cuddle with two pug crosses Lily and Bobby. Picture Craig Greenhill

“The conclusion we’re drawing is perhaps it’s not so easy to own a pet and pets are not included in our society as much as they could be,” he said.

In Europe people can take their pets on planes and trains and buses and they are much more a part of everyday life.

“As a result pets are happier and feel stimulated, they feel more energised and more included and that makes a happier pet,” says Dr Brown.

Researcher Dr Lisa Wood found: “Pets in general support first meetings between neighbours, and they are often a topic of conversation over the garden fence”. The vet has his hands full here. Picture: Bob Barker

Two in three Australian households own a pet with dogs and cats making up over two thirds of ownership.

“If we make cities and towns more pet friendly this could increase pet ownership and contribute to a more healthy and friendly Australia,” Dr Brown said.

There is growing research being done about the health benefits of pets.

Sports scientist Dr Craig Duncan has found the bond between canine* and human is so close their hearts actually beat in synch* when they are together. He also found when humans pat a dog, our bodies release oxytocin, a chemical that relieves stress.

canine: dog
in synch: at the same time

Read or listen to the article carefully and take note of the benefits of pets in our communities.

Make a list of the benefits of owning a pet to the following:

Can you add any benefits not mentioned in the article?

What does the article say can be done to stop pet ownership from continuing to decrease?

Extension: Pet numbers in your class

“Two in three Australian households own a pet with dogs and cats making up over two thirds of ownership.”

Does the pet ownership in your class match these statistics?

Survey your class to see how many students’ have pets at home.
In your survey collect data to find out what type of pets students have.
Collate the results to see if it matches the statistics in the article.

Time: allow about 40 minutes to complete this activity

In Europe pets are allowed on planes, trains and buses.
Make a list of the positives and negatives of allowing pets on public transport.

Use your list to help you form an opinion on whether we should allow pets on public transport here.

Write a persuasive piece, presenting your opinion on this topic.
Remember to support your reasons with some evidence or anecdotes.

What other places would you like to see pets allowed?
Choose an area (eg shopping centre, restaurants) and think of the positives and negatives of allowing pets in this area.
Some reasons may be the same as public transport. Try and think of some things that are specific for this area.

What can be done to make this area more pet friendly? (Eg water available for them)

Time: allow at least 45 minutes to complete this task

Up-level the opening and ending of the article.
This might require more than one sentence to be up-levelled.

Discuss what they changed and why.

Classify all the sentence openers in the article and discuss with a partner if they are the best choice and why?

If not, what would they suggest the author uses instead?
Is there sentence opener repetition?