Sketch of the giant ichthyosaur or sea dragon, from University of Manchester.

The fossilised remains of the UK’s largest ichthyosaur have been discovered in England.

Ichthyosaurs are often likened to “sea dragons” due to their large teeth and eyes.

This specimen is the biggest and most complete skeleton of its kind ever found in Britain.

The remains were discovered by conservation team leader Joe Davis at Leicestershire and Rutland Wildlife Trust, which operates the nature reserve where the fossil was found.

“The find has been absolutely fascinating and a real career highlight,” Mr Davis said. “It’s great to learn so much from the discovery and to think that this amazing creature was once swimming in seas above us.” Sketch of a giant ichthyosaur from the UK’s University of Manchester. Picture: supplied

The delicate excavation* of the remains was led by palaeontologist* and Visiting Scientist at the University of Manchester, Dr Dean Lomax, who has studied thousands of ichthyosaurs and named five new species.

“It was an honour to lead the excavation and unearth this Jurassic giant from its ancient rocky tomb,” Dr Lomax said. “Britain is the birthplace of ichthyosaurs – their fossils have been unearthed here for over 200 years … dating back to Mary Anning and her discoveries along the Jurassic Coast.

“Not only is it the largest ichthyosaur skeleton ever found in Britain, but it is also the most complete skeleton of a large prehistoric reptile ever discovered in the UK. And yes, that includes dinosaurs.”

The huge skeleton was carefully excavated in August and September 2021 by a team of experts from around the UK, including Dr Lomax, palaeontological conservator Nigel Larkin, marine reptile specialist Dr Mark Evans and vertebrate palaeontologist Dr Emma Nicholls. The leadership team was supported by volunteers with experience in excavating fossil marine reptiles, including members of a local geology and palaeontology group. Often misnamed “swimming dinosaurs”, ichthyosaurs were a highly successful group of marine reptiles that became extinct about 90 million years ago. This new specimen is around 180 million years old, with a skeleton measuring at least 10m in length and a skull weighing approximately a tonne.

Visiting Fellow at the University of Leicester, Dr Mark Evans has been studying the Jurassic fossil reptiles of the region for over 20 years and said he could tell that it was the largest in the region as soon as he saw the specimen’s initial exposure*.

“However, it was only after our exploratory dig that we realised that it was practically complete to the tip of the tail,” he said.

“The size of the new find was a total surprise. It’s a highly significant discovery both nationally and internationally.” 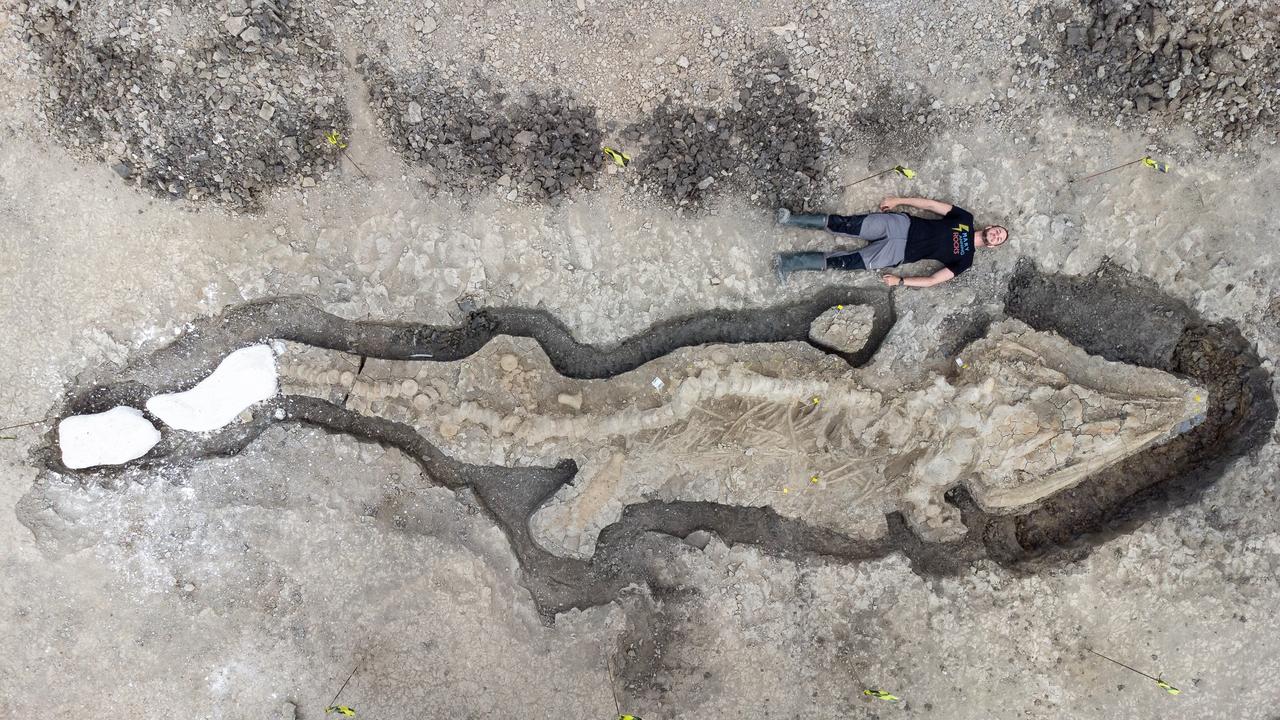 A member of the palaeontology team working on the excavation helps indicate its massive size. Picture: Matthew Power Photography/supplied

The landlocked* location also stoked the team’s interest, with most ichthyosaur discovered along coastlines. Not only did the team excavate the giant fossil, they also unearthed an entire ecosystem* of Jurassic creatures trapped in time, which together provide an insight into the ancient life of the region.

“To put this find into context for the public, in the world of British palaeontology, the discovery is like finding a complete Tyrannosaurus rex out in the Badlands* of America,” Dr Lomax said. “It is a truly unprecedented discovery and one of the greatest finds in British palaeontological history.”

The Victorian government has meanwhile announced the 125-million-year-old extinct amphibian* Koolasuchus cleelandi as the official State Fossil Emblem of Victoria.

Following an August 2021 public vote, in which 11,563 Victorians cast a ballot, the “kool” Cretaceous creature won the title.

Koolasuchus cleelandi was a car-sized amphibian that lived alongside dinosaurs in Victoria during the Cretaceous period. Resembling something between a huge newt and a crocodile, Koolasuchus was adapted to life in the rushing rivers that once separated Australia and Antarctica. Fossils of the extinct amphibian have only been found at beaches and coves in South Gippsland in Bunurong Country. 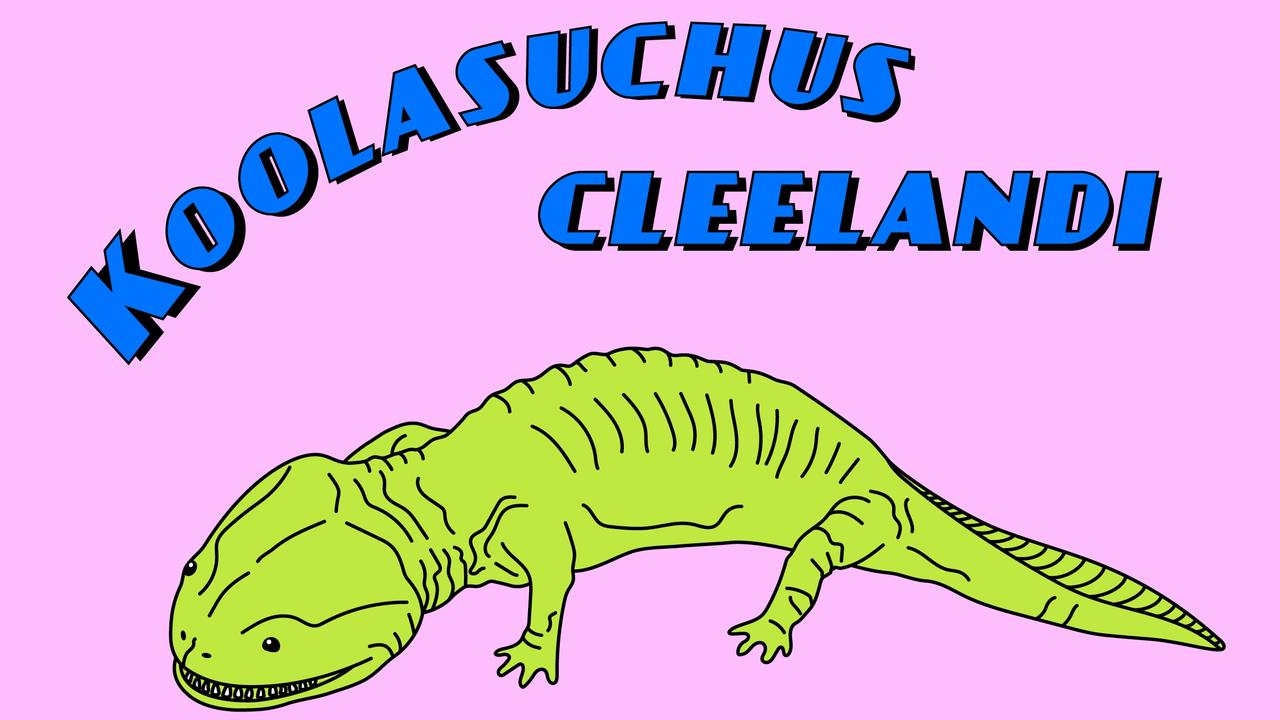 Victorians and interstate visitors can see Koolasuchus cleelandi on display in the 600 Million Years exhibition at Melbourne Museum’s science and Life Gallery. Victoria CEO and director Lynley Crosswell said state emblems recognise and celebrate the natural history of the region.

“Koolasuchus cleelandi is of global significance and it provides clues to the evolution of life on Earth and the past environments of Victoria,” she said. An artist’s impression of the Koolasuchus cleelandi. Picture: supplied

“While it might not be a creature you’d want to come across in the wild, the Koolasuchus cleelandi tells a fascinating story about Victoria’s history,” he said.

CLASSROOM ACTIVITIES
1. Write a job ad
A team of volunteers helped to unearth the ichthyosaur. What skills and abilities do you think a volunteer would need for this job? Write a job advertisement to get the best volunteers for the next amazing excavation.

Create a story inspired by this statement.

2. Extension
Joe Davis said that the ichthyosaur “ … was once swimming in seas above us.” What do you think he means? Write a description of what the site was like during the Jurassic period. Use the information or clues in the story to help you.