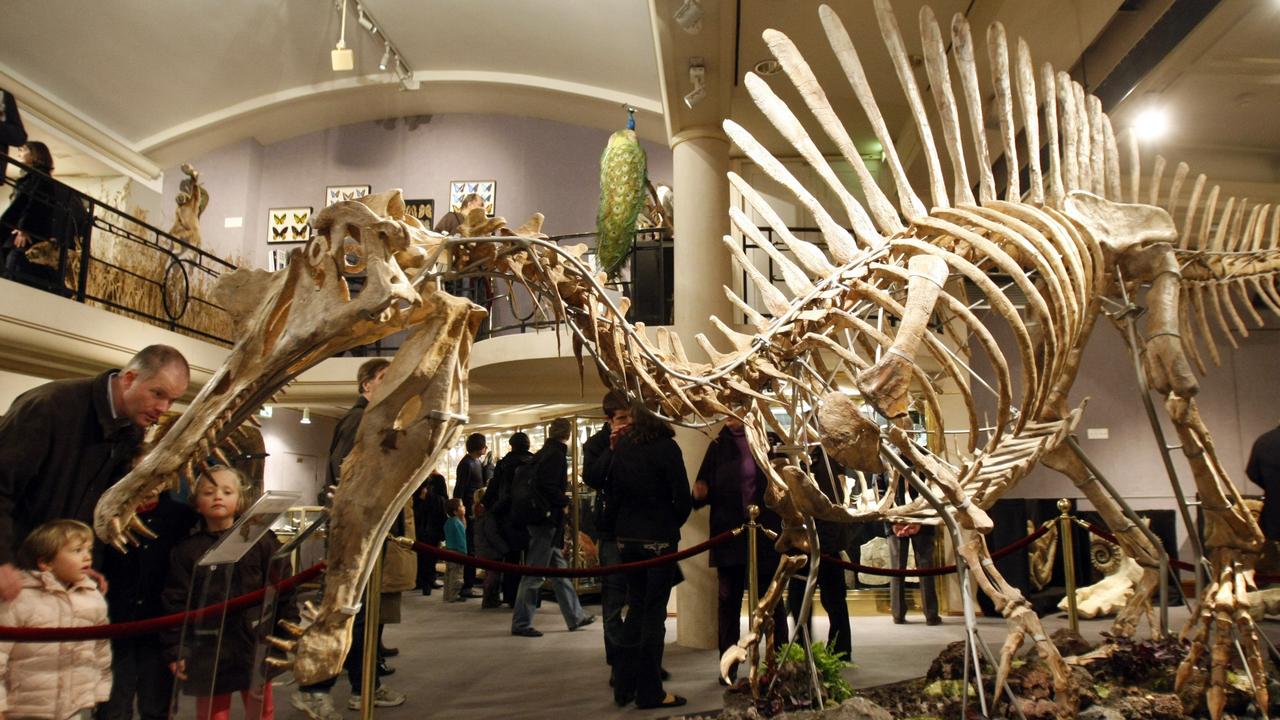 A new study has found that the bone density of Spinosaurus not only distinguished it from other dinosaurs but also likely explains its semiaquatic life. Picture: AP Photo

The largest-known carnivorous* dinosaur, Spinosaurus has always confounded* scientists. How did these weird, water-loving beasts live their lives and hunt their prey?

Did they wade into rivers and lakes like a heron? Or did they swim underwater like a hippo or croc?

It turns out that the answer was in their bones – their bone density*, to be precise. Scientists have announced that Spinosaurus and its cousin Baryonyx had very compact bones that would have helped them stay underwater as semiaquatic* predators* targeting large prey.

Both were members of the Cretaceous Period dinosaur group called spinosaurids that had long, crocodile-like snouts and conical teeth for hunting aquatic prey. But the researchers found that another spinosaurid called Suchomimus did not have dense bones and was probably a wading predator, showing the group’s unexpected ecological* diversity.

Spinosaurus, about 15m long and weighing seven tonnes, lived 95 million years ago in Africa. Its anatomy* was unlike any other dinosaur, with a relatively small pelvis, short hind legs, paddle-like tail and feet for propulsion* in the water and a strange, sail-like structure of bony spines 2m tall on its back. One of the most distinctive features of Spinosaurus is the sail-like structure down its back, as seen here on display at a dinosaur exhibition at the Museum of Tropical Queensland. Picture: Evan Morgan

“I think this animal is simply weird – we have nothing alive today that could be considered remotely similar,” said postdoctoral researcher in palaeontology* at Chicago’s Field Museum, Dr Matteo Fabbri, lead author of the study published in the journal Nature.

“I really like the idea of this giant animal, weighing many tonnes, submerging under water to catch prey,” said University of Oxford palaeontologist and study co-author Roger Benson. “It is striking to me that it has a giant sail-crest on its back. That would have made it hard for it to hide under water, but much more ominous*: a bit like a shark fin poking above the water line.”

The researchers studied 297 species of living and extinct animals, land-dwellers and water-dwellers. Bone density was found to be a defining feature in animals adapted for life in the water, such as whales, seals, dugongs, hippopotamuses, crocodiles, penguins and various extinct marine reptiles.

No other dinosaurs were found with the bone density of Spinosaurus and Baryonyx, indicating they were alone among dinosaurs in conquering the aquatic realm. The researchers studied 297 species of living and extinct animals, land-dwellers and water-dwellers, including crocodiles, who share the bone density characteristic with Spinosaurus.

While Spinosaurus beats even the Tyrannosaurus rex for size, its anatomy has always puzzled scientists. Original fossils from Egypt were destroyed during World War II, but the discovery of a skeleton in Morocco in 2008, and additional tail bones dug up later, led some palaeontologists to suggest that Spinosaurus was semiaquatic and an active swimmer. Other researchers looking at the same fossils disagreed.

The new study attempts to settle the debate.

Spinosaurus was even bigger than the fearsome T-rex – this fictional contest between Velociraptor and Spinosaurus from the 2001 film Jurassic Park III may not have ended well for the Velociraptor in real life.

Big fish in rivers and lakes as well as dinosaurs walking along their banks may have been appealing prey for Spinosaurus.

“Spinosaurus was perhaps moving along shallow waters using a combination of ‘bottom-walking’ – like modern hippos – and lateral strokes of its giant tail,” said University of Cambridge postdoctoral researcher and study co-author Dr Guillermo Navalón. “Probably it used this means of locomotion not to pursue prey for long distances in open waters but to ambush and catch very large fish like lungfishes or coelacanths.”

CLASSROOM ACTIVITIES
1. Labelled diagram
Draw your own picture of a Spinosaurus. Use information about the dinosaur provided in the news story to help you label your diagram. Your labels might include a description of body parts including their shapes, sizes or uses.

2. Extension
Draw a 1:100 scale silhouette of a Spinosaurus, a Baryonyx, a Suchomimus and yourself to compare sizes.