Taronga Zoo have had success breeding the critically endangered Bellinger River snapping turtle, a species that was almost wiped out by a disease in 2015. This year 35 babies have hatched in their breeding facility. Picture: Toby Zerna

The short-necked freshwater turtle species is endemic* to the Bellinger River on the mid north coast of NSW and was almost completely wiped out in 2015 by a virus in the river.

A NSW Government emergency response team was formed to investigate and co-ordinate the rescue of a group of healthy turtles to establish an insurance population.

Taronga is working closely with NSW Department of Planning Industry and Environment (DPIE), Western Sydney University and Symbio Wildlife Park to save this species.

DPIE scientists managed to retrieve 16 healthy turtles from the river in 2015, which were later relocated to a special quarantine breeding facility at Taronga Zoo.

Already this year, 35 baby turtles have hatched at the facility. One of the baby turtles that has hatched at Taronga Zoo this year.

“This is our fourth successful breeding season of the Bellinger River Snapping Turtle, and we now have nearly 100 of these turtles living at our quarantine facility at Taronga Zoo,” said Adam Skidmore, a Taronga reptile keeper who cares for the species.

“The hatchlings are doing really well – eating lots and growing – and we are really happy with their development.”

“During the breeding season we check the nests daily,’ said Mr Skidmore. “We then remove the eggs, weigh and measure them and place them in our incubator. We then check on them daily and wait for them to hatch, which can take up to 70 days.” 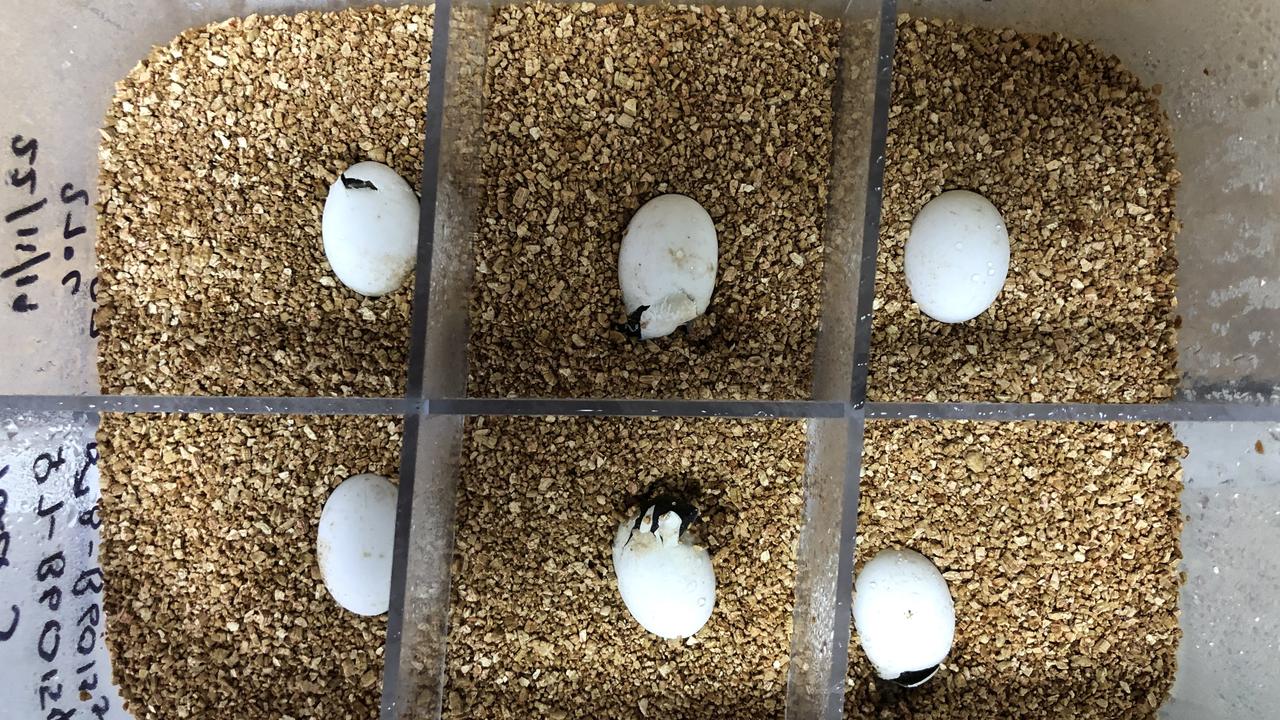 An incubator to keep the eggs warm and help the baby turtles hatch. 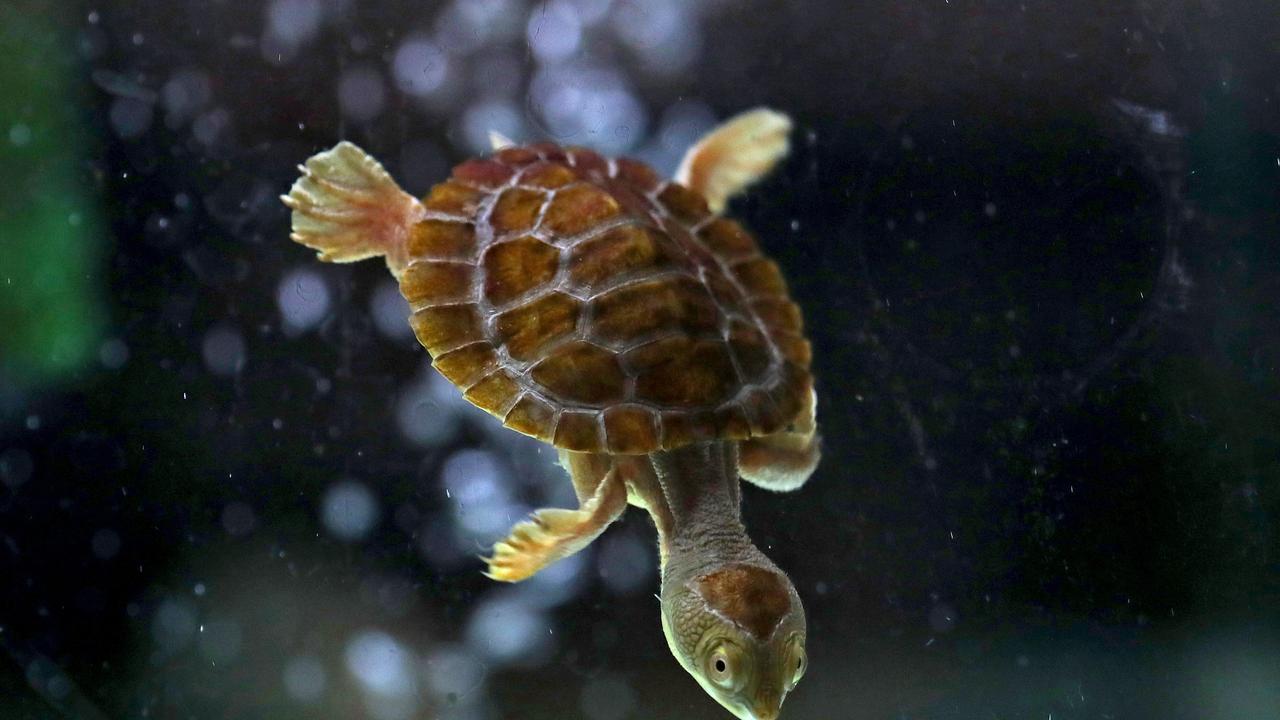 A baby Bellinger River snapping turtle off for a swim at Taronga Zoo. Picture: Toby Zerna

“We have so far released 20 snapping turtles back into their natural environment and we are delighted to say their survival rate has been extremely high,” said SoS Threatened Species Officer Gerry McGilvray.

“This species could have been wiped out if not for the rapid response from Saving our Species and its partners. Releasing animals bred in captivity at Taronga represents a big step on the path to securing this species in the wild.”

They are omnivores* but eat more meat than plants.

Snapping turtles can breathe in the regular way, by taking in air through their mouths to their lungs. When they are hibernating underwater, they can also take in oxygen and get rid of carbon dioxide by cloacal respiration.

Cloacal respiration means taking oxygen into their blood vessels directly from the water that moves across their skin. In snapping turtles, one of the areas of skin that does this best is around their bottoms. 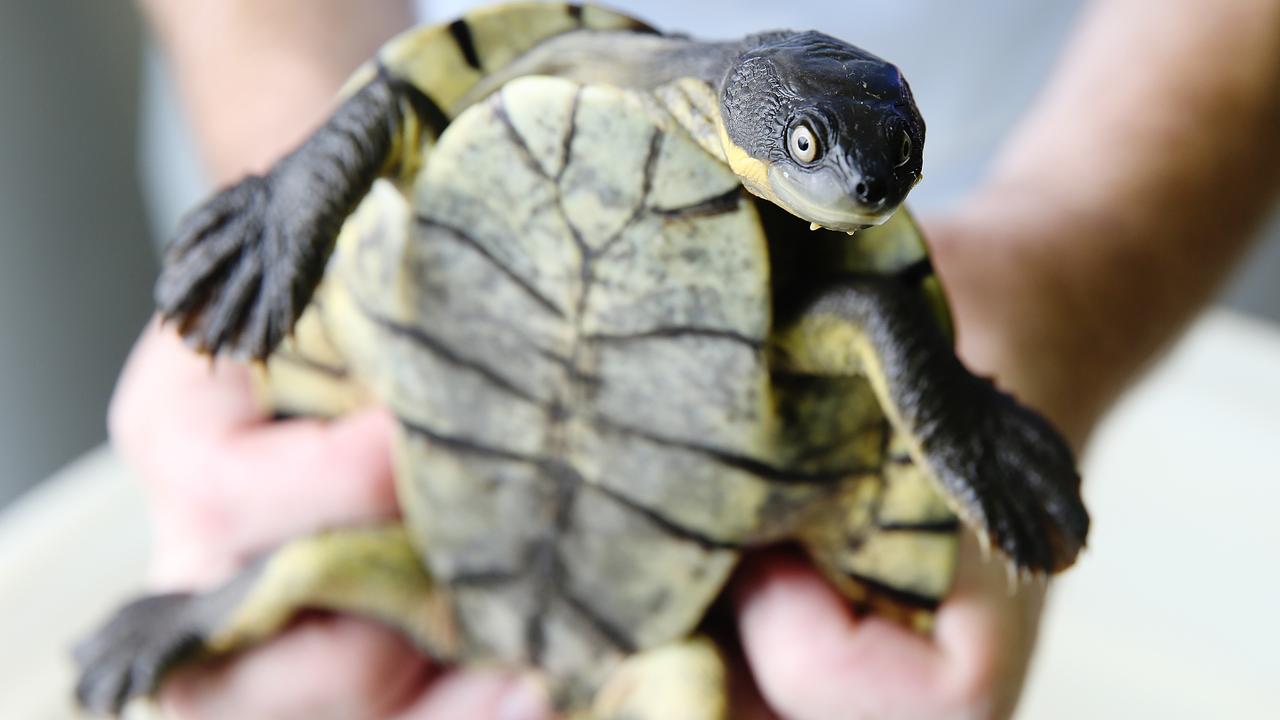 Bellinger River snapping turtle saved from its natural habitat in 2015 and then quarantined to keep it healthy. Picture Craig Greenhill

Has Yoshi the turtle swum home to Australia?

CLASSROOM ACTIVITIES
1. SWOT Analysis
Work with a classmate and complete the SWOT (Strengths, Weaknesses, Opportunities and Threats) analysis in the table below evaluating the New South Wales Government’s Saving our Species (SoS) program. Think about things like how they decide which species to save, how they capture animals, how they re-release them into the wild and how they will go back in their natural habitat after being bred in captivity. A SWOT chart to fill in with strengths, weaknesses, opportunities and threats

2. Extension
Why do you think zoos like Taronga Zoo participate in these breeding programs to release them back into the wild? List your reasons.

HAVE YOUR SAY: Which endangered animal would you like to help save?
No one-word answers. Use full sentences to explain your thinking. No comments will be published until approved by editors