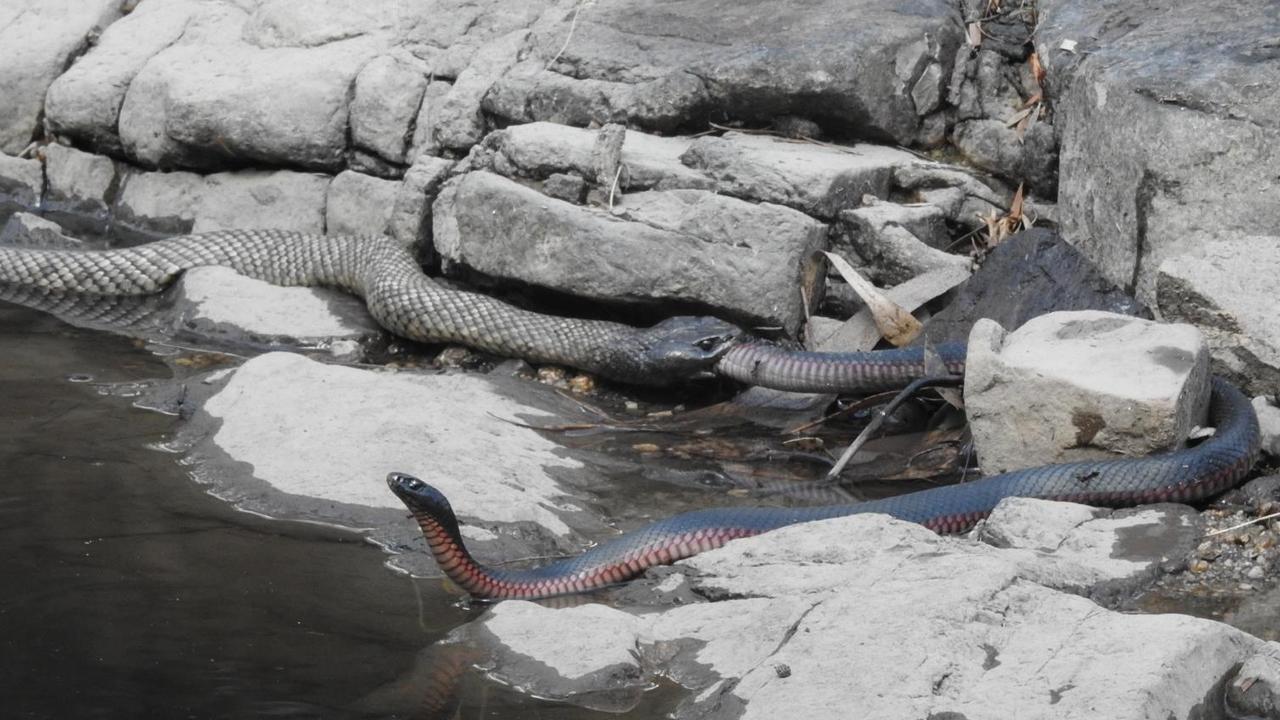 An Australian woman has ignored her instinct to run far away and stayed calm enough to film extraordinary video of one snake eating another snake.

Keen photographer Jenny Hillman stumbled across a fight between a spotted black snake and a young red-bellied black snake at Severn River in Ballandean, Queensland earlier this week.

She was walking near her home and saw a red-bellied black snake come out from a crack in a rock.

To her surprise, she soon saw that the red-bellied black snake had a spotted black snake attached to it, hanging on with its mouth. Jenny Hillman’s first view of the fight was just one snake coming out from between the rocks. Picture: Jenny Hillman

“At the river this morning! A truly gargantuan* battle,” she posted on social media platform Facebook on Tuesday.

The fight went on for about an hour but the short video is a dramatic battle full of twists, turns, strikes and bites as the pair fight on rocks and in water.

“The (spotted black) snake won in the end, but he was bitten so many times by the black that I don’t know if he will end up dying anyway,” Ms Hillman wrote on Facebook.

“It was awesome to watch.”

Ms Hillman filmed from a safe distance and zoomed her camera’s lens in on the scene. Snake catcher Tony Harrison identified the two snake species Jenny Hillman saw. Here, he is holding what is probably a coastal carpet python. Being a snake catcher is a very dangerous job and we shouldn’t ever try to touch a snake. Picture: Nigel Hallett

Associate Professor at the University of Queensland’s School of Biological Sciences, Bryan Fry, said a snake was a convenient meal for another snake.

“You can just think of it like slurping down a nice long piece of fettuccine*,” he told ABC.

Both species are highly venomous*. Keep pets away from a snake, but look after your own safety first.

If someone is bitten by a snake, ask an adult for help.

Call Triple Zero (000) for an ambulance.

Do not wash the bite area as venom could help identify the snake.

Lie the person down and keep them calm and still.

Using a bandage or clothing, wrap the bite area as firmly as possible.

If possible, write down the time of the bite and when the bandage was applied.

Stay with the person until help arrives.

CLASSROOM ACTIVITIES
1. Narrate the documentary
In the animal world, hunting, attacking and eating your prey is normal for some species. In fact, it is necessary for survival. This battle was described as a “gargantuan battle”. It was impressive to watch although tricky to keep track of who is winning. The whole fight is much longer than this video. Pretend you are the narrator on a documentary about snakes. Use information from the article and the video to narrate what is happening. Include information about the species, when, where and why it is happening. Remember documentaries are a form of nonfiction text, so ensure your narration only contains factual information.

Practise reading your narration in time with the video. When you are happy with it present it to your class.

2. Extension
The article says that red-bellied black snakes and spotted black snakes are similar to each other. Complete a Venn diagram (two overlapping circles) showing the similarities and differences between the two species. You may need to do a little more research to help you with this. As they are quite similar you may need to make the overlapping section of your circle quite large. Write the things that are unique to each species in its own circle but not in the overlapped section. In this area, write the things that are the same about the two species.

HAVE YOUR SAY: Have you ever seen a snake up close? How did you feel?
No one-word answers. Use full sentences to explain your thinking. Comments will not show until approved by editors.