A child gets a close up look at a coelacanth at the South Australian Museum. Picture: Naomi Jellicoe

The coelacanth – a wondrous fish that was thought to have gone extinct along with the dinosaurs 66 million years ago before being found alive off South Africa’s east coast in 1938 – is offering up even more surprises.

Scientists said a new study of these large and nocturnal* deep-sea fish shows they live about five times longer than previously believed – roughly a century*.

The study also found that females carry their young for five years, the longest-known gestation* period of any animal.

Focusing on one of the two living species of coelacanth, the scientists also determined that it develops and grows at among the slowest pace of any fish and does not reach sexual maturity* until about age 55. A coelacanth specimen is restored in 2019 so it can go on display at the French National Museum of Natural History. Picture: AFP

The researchers used annual growth rings deposited on the fish’s scales to determine the age of individual coelacanths.

Study lead author and marine biologist* Kélig Mahé, from the French Research Institute for Exploitation of the Sea, said this method of determining age was “just as one reads tree rings” to estimate the age of trees.

They were thought to have vanished during the mass extinction that wiped out about three-quarters of Earth’s species following an asteroid strike at the end of the Cretaceous Period.

After being found alive, the coelacanth was dubbed* a “living fossil”. But scientists do not like this description, saying coelacanths have changed a great deal over time.

“By definition, a fossil is dead, and the coelacanths have evolved a lot since the Devonian,” said biologist and study co-author Marc Herbin, from the National Museum of Natural History in Paris. 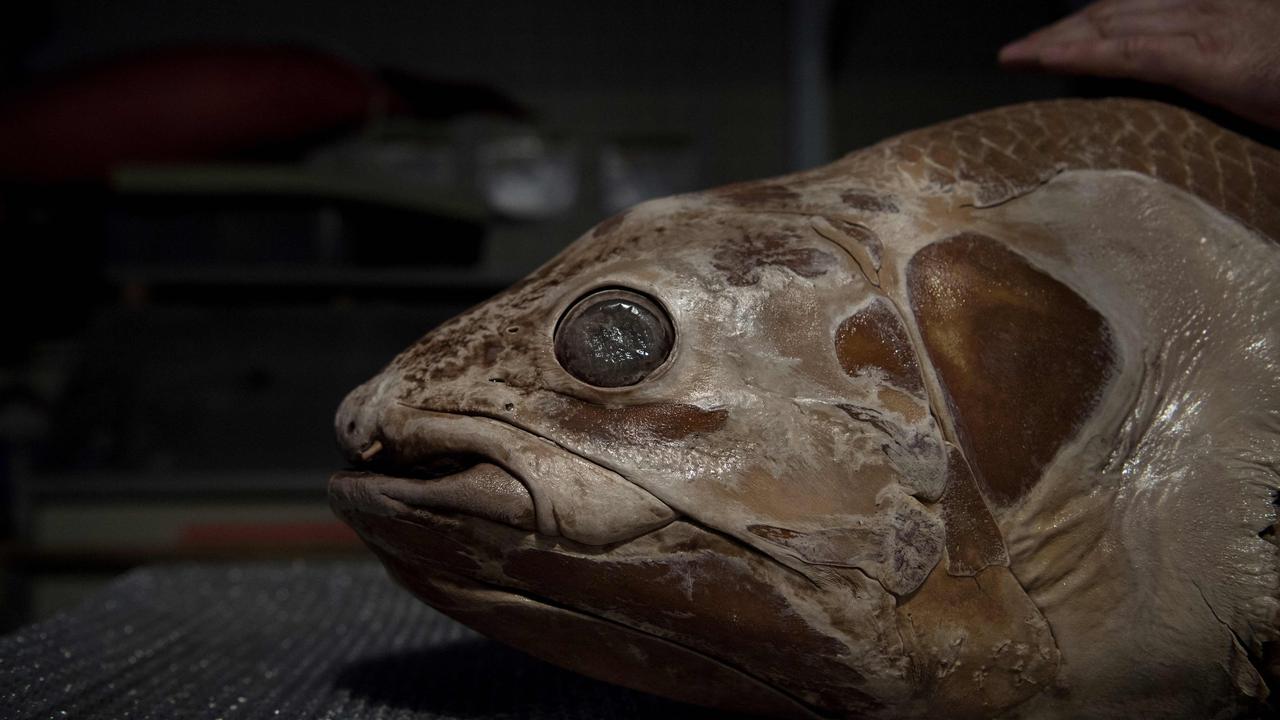 A close up of the coelacanth being restored for display at the French National Museum of Natural History in Paris in 2019. Picture: AFP

It is called a lobe-finned fish based on the shape of its fins, which differ structurally from other fish. Such fins are thought to have paved the way for the limbs of the first land vertebrates* to evolve.

Coelacanths reside at ocean depths of as much as 800m. During daylight hours they stay in volcanic caves alone or in small groups. Females are larger than males, reaching about 2m long and weighing 110kg.

The two extant* species, both endangered, are the African coelacanth, found mainly near the Comoro Islands off the continent’s east coast, and the Indonesian coelacanth.

The study, published in the journal Current Biology, focused on the African coelacanth, using scales from 27 individuals in two museum collections.

Previous research had suggested roughly a 20-year lifespan and among the fastest body growth of any fish. It turns out that this was based on a misreading decades ago of another type of ring deposited in the scales.

“After reappraisal* of the coelacanth’s life history based on our new age estimation, it appears to be one of the slowest – if not the slowest – among all fish,” said marine evolutionary ecologist* and study co-author Bruno Ernande.

“A centenarian* lifespan is quite something.”

But it is not the longest lifespan. The Greenland shark, a big deep-ocean predator, is the longest-living vertebrate, with a lifespan reaching roughly 400 years.

All the facts and information you need are contained in the Kids News article. Create an information diagram like this one of a cheetah from enchantelearning.com.

2. Extension
If the coelacanth can’t have babies until around 55 years of age, and each gestation to have a baby is roughly five years, how many babies could they possibly have in their life?

Do you think this could contribute to their endangered status?