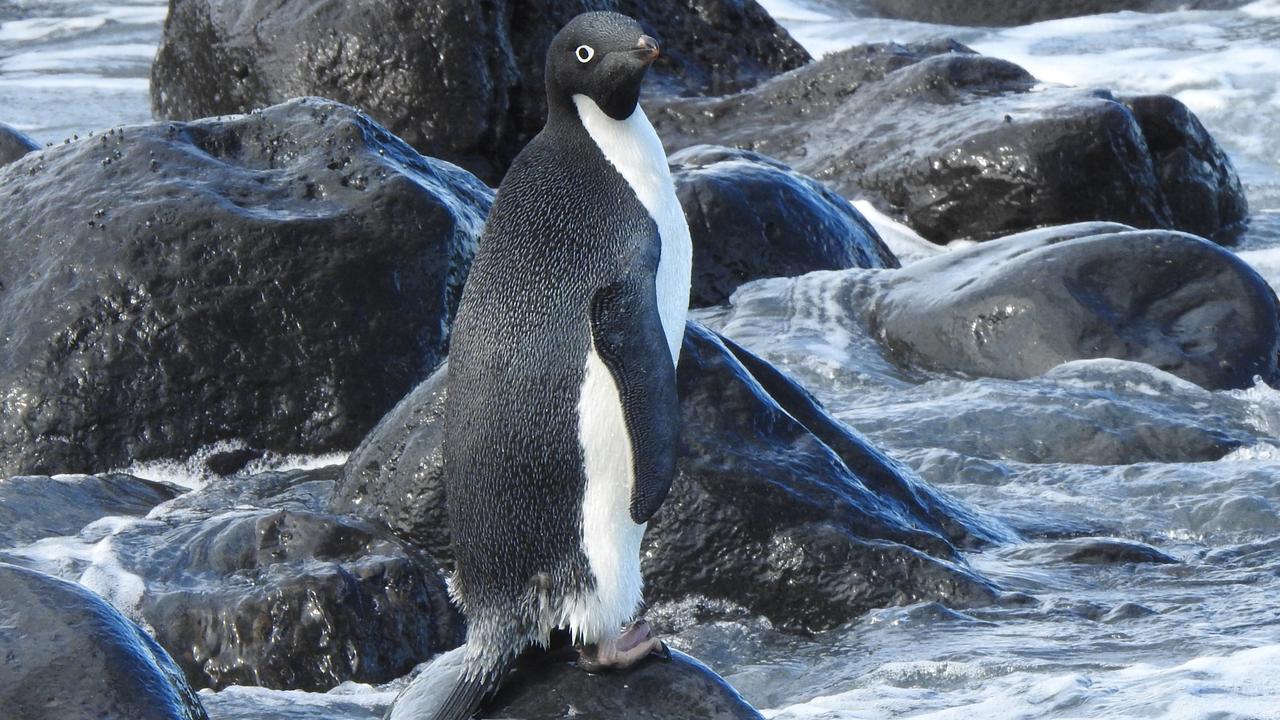 Pingu the intrepid adelie penguin showed up south of Christchurch, about 3000km from his Antarctic home. Picture: Allanah Purdie, NZ Department of Conservation

Pingu the adelie penguin might just be the first international tourist to arrive in New Zealand by water since borders closed at the start of the pandemic last year.

Named for the character in the claymation* series, the rare penguin was found on the coast south of Christchurch about 3000km from its Antarctic home.

Harry Singh, the local resident who found Pingu while strolling the beach with his wife, told international media that he initially thought the penguin was a “soft toy”.

“Suddenly the penguin moved his head, so I realised it was real,” Mr Singh is quoted as saying. “It did not move for one hour … and (looked) exhausted.” Worried the penguin could be attacked by unleashed or wild animals on the beach, Mr Singh called a rescue crew and waited until help arrived.

Christchurch Penguin Rehabilitation* rescuer Thomas Stracke attended the scene with a vet and the pair successfully removed the bird and took him into the centre’s care.

According to digital encyclopaedia* New Zealand Birds Online, this is only the third time in history that an adelie penguin has been found on the New Zealand coast, following two prior sightings in 1993 and 1962. The sight of an icebreaker in Antarctica is a lot more common than the sight of an adelie penguin in New Zealand. Picture: AAP Image

New Zealand’s Department of Conservation* (DOC) senior ranger Anita Spencer said the agency worked with a rehabilitation team to prepare the penguin for his return journey.

“When he was picked up from the beach … he was a bit underweight and exhausted,” Ms Spencer told AAP. “I wouldn’t say that he was lost, though. Juvenile penguins do roam. They don’t breed until they are three to six years of age, so he’s gone for a trip before making his way back to the colony.”

Ms Spencer told AAP that Pingu showed some signs of stress on Friday, which was unsurprising given the local temperature 26C – almost tropical for a bird used to Antarctica’s subzero conditions. Pingu’s fellow adelie penguins sure know how to have a good time, as seen here in 2018 as the members of one colony leap off an iceberg at Danger Islands in east Antarctica. Picture: AFP Photo

But after a mini-break full of five-star pampering*, it was time for Pingu to be directed back home.

“He’s been given some fish smoothies. He was looking good and ready to go back to sea,” Ms Spencer said.

“He’s hopefully heading south but there are no guarantees. It’s all up to him, really. We picked a south-facing bay with not too many visitors and no dogs.

“It’s always great to see birds back into their natural habitat. He jumped across a couple of boulders, went down to the water’s edge, the waves came in and he (dived) in.”

“They’re very vulnerable* and the safest place for them is at sea.” After a five-star mini-break in New Zealand, Pingu the adelie penguin was ready to dive back in for his next adventure at sea. Picture: Allanah Purdie, NZ Department of Conservation

Otago University zoologist* Professor Philip Seddon told Kids News that if adelie penguins start showing up every year, it would suggest a change in the ocean that would need investigating.

“More studies will give us more understanding where penguins go, what they do, what the population trends are like – they’re going to tell us something about the health of that marine ecosystem* in general,” Prof Seddon said.

Your comic strip should just use illustrations and speech bubbles to tell your narrative like a comic strip does. Be as adventurous and entertaining as you can telling Pingu’s story.

2. Extension
Zoologist Professor Seddon states in the article that if “Adelie penguins start showing up every year, it would suggest a change in the ocean that would need investigating”.

What changes could he be referring to?

What might happen to species such as these penguins if ocean temperatures rise?

VCOP ACTIVITY
Imaginative dialogue
Imagine you were there during the event being discussed in the article. Create a conversation between two characters from the article – you may need or want to include yourself as one of the characters. Don’t forget to try to use facts and details from the article to help make your dialogue as realistic as possible.