Kaido the puppy gives Little Bug the cat a hug at a Victorian vet clinic called Community Vets, which provides affordable vet care for the pets of people in need. Picture: Alex Coppel

The ACT could become the first state or territory of Australia to recognise in law that animals have feelings.

New laws would treat animals as sentient beings, which means that they are able to feel and perceive* the world and that humans have a duty to care for their physical and mental* wellbeing. New laws would recognise that animals have feelings, although that won’t help anyone know whether this dog is cross or smiling. Picture: iStock

“I know with my dog he gets very excited when we’re about to go on a run.” 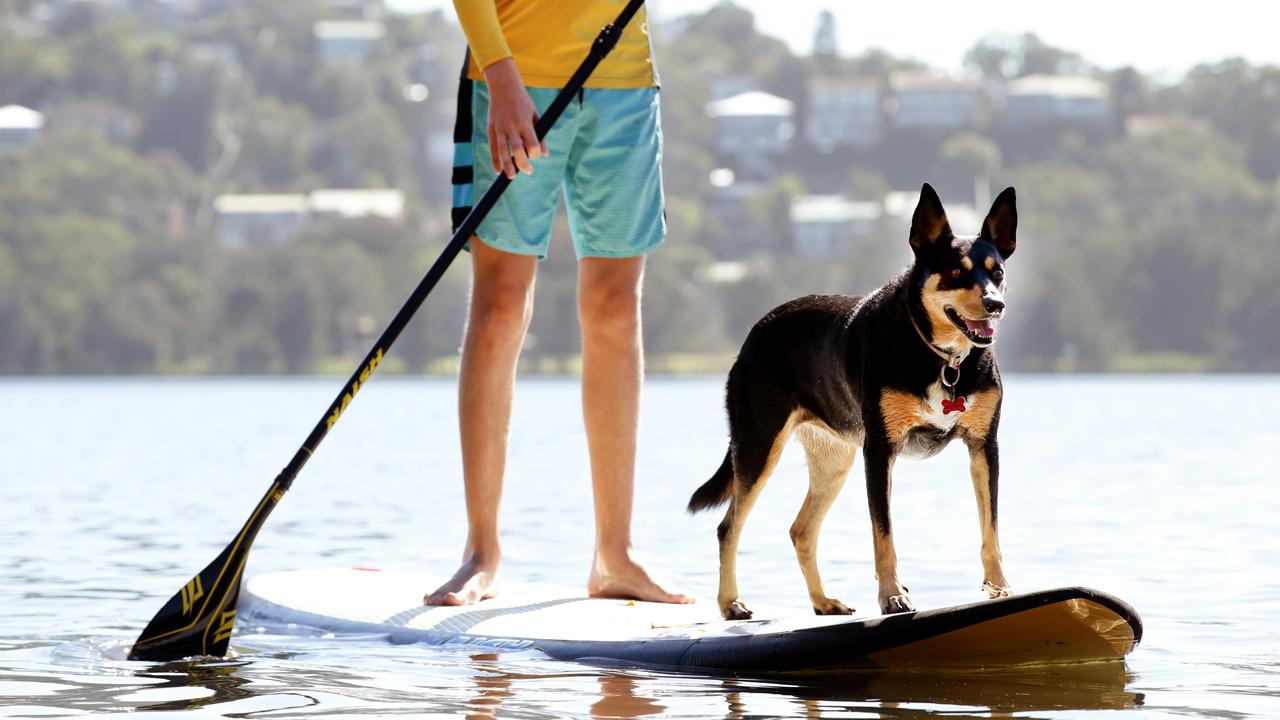 Kelpie Salty paddleboarding on Narrabeen Lagoon, NSW, with Rudy. Under proposed laws, animals won’t be able to be locked up for long periods without exercise. Picture: Jonathan Ng

Under the new laws, pet owners wouldn’t be able to keep their animals locked up without allowing them to exercise each day, although there would be exceptions for reasonable restraint*, such as chickens in a coop or a cat in a cat enclosure.

Fines would apply for not providing adequate food, water, grooming and veterinary care and for injuring an animal and not reporting it. It would be against the law to have an animal in a moving vehicle without proper restraint. Animal lovers such as Anne Beaty already care for their pets very well. Anne is polishing the bill of her mallard duck before it competes in a poultry show. Picture: Nicki Connolly

People found guilty of the new laws could be fined or jailed.

It would also become legal for someone to break into a car to protect an animal from death or serious injury if there is no other reasonable option.

The proposed changes to the territory’s animal welfare laws will be introduced in a bill to the ACT Legislative Assembly (parliament) this week and follow similar new laws introduced in New Zealand in 2015.

A bill is a proposal put to parliament for a new law or a change to an existing law. Politicians vote on whether the bill becomes law.

European Union (EU) laws recognise animals as sentient beings but it is not yet clear whether the same laws will apply in the UK once it leaves the EU as part of the Brexit* process. Kittens at the Cat Protection Society at Enmore, NSW, which is a charity that looks after cats and tries to find them a caring home. Picture: Richard Dobson

CLASSROOM ACTIVITIES
1. Animals v Humans
A sentient being is defined as one that has the power to perceive, reason and think. Make a list of arguments FOR and AGAINST animals being classified as a ‘sentient being’ by law.

Use these arguments to choose a point of view (For or Against), and write a persuasive text arguing your point of view.

A persuasive text should be structured in the following way:

INTRODUCTION:  I think that … (and why)

CONCLUSION: This is why I believe that …

2. Extension
Survey/question your classmates to gather some examples of clever things their pets do or have done to help convince you that they do ‘have the power to perceive, reason and think’.

Do you think this law should be introduced into all states and territories of Australia? Why or why not?

HAVE YOUR SAY: Do you think animals are sentient beings with feelings?
No one-word answers. Use full sentences to explain your thinking. No comments will be published until approved by editors.