A year of wonderful news at our zoos Zoos were closed for much of 2020 and many of us spent more time at home than usual as we all did our bit to stop the spread of the coronavirus.

But the animals, vets, zookeepers and scientists didn’t miss a beat*, with important species conservation and care work continuing at zoos and wildlife sanctuaries around Australia.

Kids News asked some of these hardworking animal experts to nominate* the most memorable animal stories of the year. There was far too much good news to include it all, but here are a few stories we love too. APRIL: HIPPO CALF BORN
There was the pitter-patter of little hoofs at Taronga Western Plains Zoo, NSW with the birth of a male hippo calf named Kani to mum Cuddles. He was born in the shallow water of the zoo’s Hippo Lake as a calf can only hold its breath for about 30 seconds at birth and mother hippos instinctively* know this.

Kani means strength and energy in Kiswahili (a language from Tanzania/Kenya) after it was selected as the most popular name from the zoo’s social media followers. JUNE: LIONS ARE BACK!
Lions returned to Taronga Zoo Sydney, NSW, for the first time in more than five years with the arrival of three-year-old lion brothers Lwazi and Ato from Werribee Open Range Zoo in Victoria. The brothers moved into Taronga’s new African Savannah Precinct. Bear was rescued in February after being found by a passer-by injured and stranded on the Noosa North Shore. He had a bone infection and was covered in barnacles, which are marine crustaceans that attach to and live on the turtle shell.

Though his keepers felt a little sad to see him go, releasing a healthy turtle into the wild is a happy event. Tasmanian devils are back in the wild on the mainland. Picture: Aussie Ark

JULY: DEVILS BACK ON THE MAINLAND
After what’s believed to be about 3000 years, there are once again wild Tasmanian devils living on the mainland of Australia. Fifteen devils were reintroduced to the wild in the Barrington Tops National Park north of Newcastle, NSW in July and another 11 in September.

The sanctuary gives the endangered devils space to roam and freedom to adjust to the wild, while also protecting other animals in the area, and allowing conservationists from animal conservation group Aussie Ark to monitor* their progress in the lead up to the 2021 breeding season.

A contagious cancer is threatening the Tasmanian devil population and the species is now considered endangered.

It’s hoped that a backup population can be maintained on the mainland, free of the cancer. Keepers watched the birth on camera and said the calf arrived safely and was soon feeding. The keepers got to see Umqali and her calf in person early the next morning.

The calf is the seventh born to Umqali and one of six southern white rhinoceros currently at the zoo.

Monarto Safari Park Director Peter Clark said the newborn calf was a significant arrival for a species that is threatened with extinction.

“Nearly 10,000 animals have been lost to poaching* in the wild in just the last 10 years with numbers surviving now thought to be less than 15,000,” Mr Clark said. Though all births at zoos are important and special, the birth of this sea-lion pup was wonderful news for this endangered native marine species, the numbers of which continue to decline in the wild. Fewer than 25 pups are born in the wild each year.

Threats to the species include increasingly isolated populations, overfishing and entanglement* in fishing debris* such as nets and lines.

Read the full story: What will you name the sea-lion pup? SEPTEMBER: BILBIES ARE BACK!
Bilbies returned to Sturt National Park, NSW for the first time in more than a century.

Teams from Taronga Zoo Sydney and Taronga Western Plains Zoo released the bilbies into the wild in Sturt National Park. They had been bred in a purpose-built, predator-proof sanctuary in Dubbo. The release is the first of many with the eventual aim of the program to re-establish a wild bilby population in NSW. OCTOBER: WELCOME LITTLE CHIMP
A tiny baby chimpanzee female was born at Taronga Zoo Sydney on October 7. While mum Naomi was initially extremely protective of her baby, keeping her close to her chest, guests and keepers have since been able to get some glimpses of the cute new arrival. The birth is particularly significant given 19-year-old Naomi has had complications with her previous pregnancies. Naomi’s baby is now named Niambi, which means Melody in Swahili. 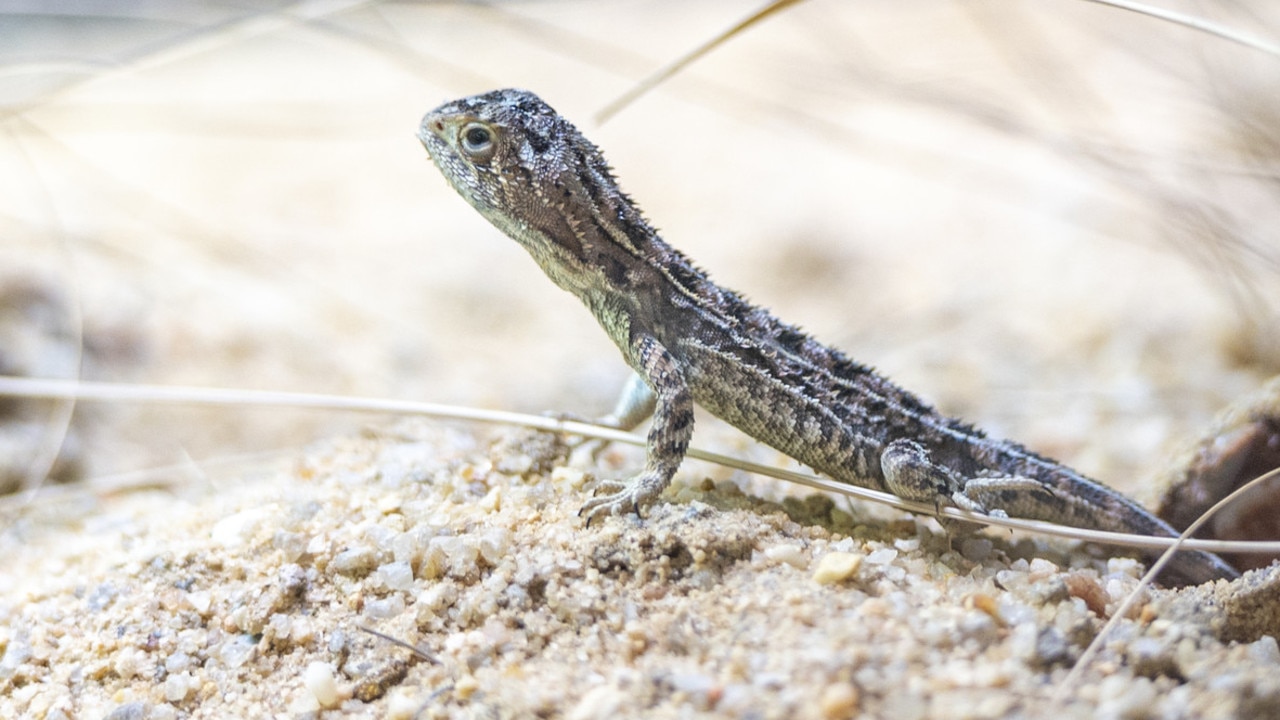 The species is classified as critically endangered in Victoria, with the last confirmed Victorian sighting 50 years ago.

Sixteen dragons hatched at Melbourne Zoo’s Reptile House last year, the first time the species had been successfully bred at a zoo.

The young dragons are descendants* of parents collected from the wild in the ACT as part of a program to establish a zoo-bred insurance* population.

Another 22 of the rare reptiles have hatched at the zoo this year, and there are more fertile eggs in the incubator. DECEMBER: BUSHFIRE KOALAS BACK IN THE WILD
The last 14 koalas badly burned in the Black Summer bushfires were returned to their wild homes in East Gippsland, Victoria in early December.

The koalas returned home 10 months after being rescued from the bushfire zone and brought to the triage* centres set up in East Gippsland.

After being stabilised, the koalas were evacuated – some by special RAAF jets – for further treatment at Healesville Sanctuary’s Australian Wildlife Health Centre and Melbourne Zoo’s Vet Department in Victoria.

Following treatment, mainly for burns, the koalas have been ‘rewilding’ by building up their strength, fitness and climbing abilities at a large prerelease enclosure on Phillip Island, at Healesville Sanctuary and with wildlife carers.

And, in a world first, all of the koalas were fitted with radio tracking equipment to check how they are progressing in the coming months. CLASSROOM ACTIVITIES
1. Congratulations!!
What fantastic news from zoos around Australia.

Some of these good-news stories are about animal births. The birth of a baby is always exciting. What makes this more exciting is that these animals have declining populations in the wild.

Write a card to one of the zoos, congratulating them on the birth of one of the above animals. Address the card to those responsible for their care.

In your card explain why the birth of these animals is particularly special for their species. Make your card personal by including as many details about the animals as you can.

Decorate your card appropriately for the animal you have chosen.

2. Extension
Choose one of the animals mentioned in this article to create a BRAINSTORM about them.

Start by writing the name of the animal in the centre of your page with a circle around it. Draw lines from this circle and write information you know about this animal at the end. Some information about the animal is included in the article. For further information you may need to do some more research. Try to include:

VCOP ACTIVITY
Animal Alliterations
Choose one of the animals from the article.

Make a list of nouns you could use to name the animal. For example, instead of a tiger, you could also say cat, or feline.

Now, using the initial sound, make a list of adjectives to describe the animal. Try and be specific. Don’t just look at the animal as a whole, look at their different features as well.

Try and put it all together and use as many same sound words in a sentence, to create an alliteration about the animal in the story.

HAVE YOUR SAY: What is your favourite animal story of 2020?
No one-word answers. Use full sentences to explain your thinking. No comments will be published until approved by editors.