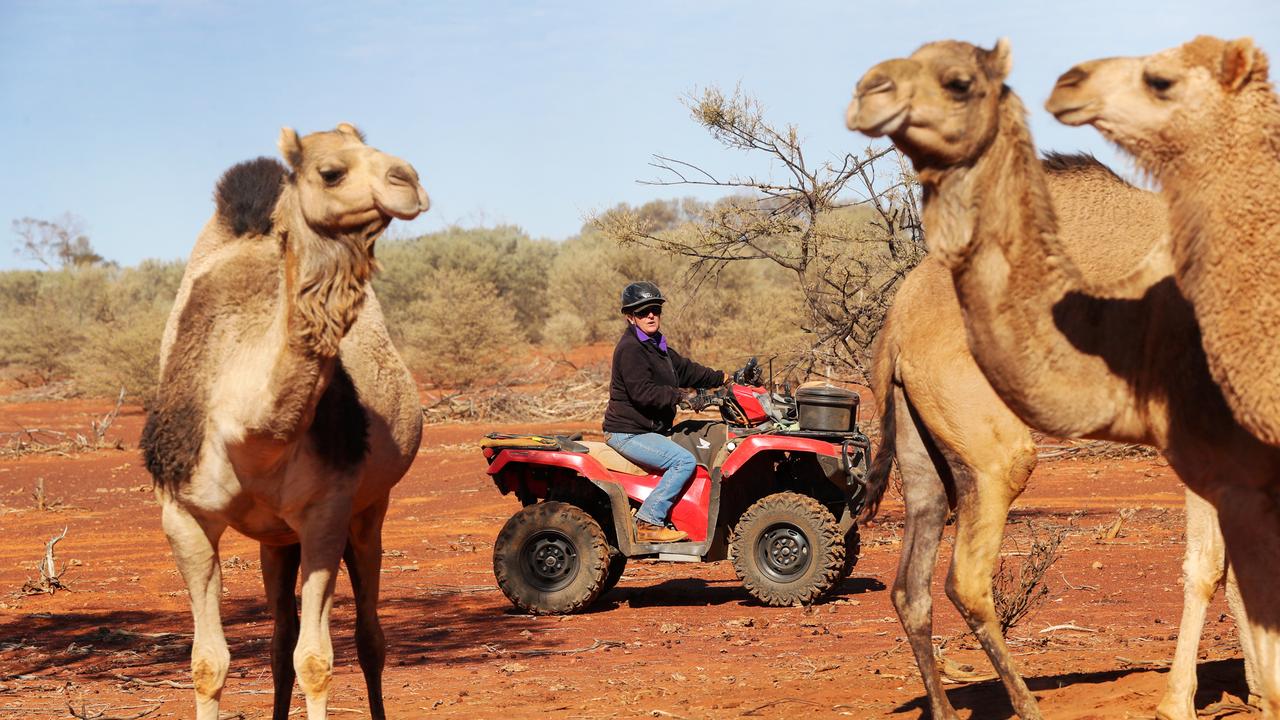 Camels are being used on drought-affected Australian farmland to help look after the land and maybe even make money.

West of Cunnamulla, in southwest Queensland, Tony Lovell has introduced camels in with his company’s cattle to try to rejuvenate* the land, take the pressure off pastures* in the big dry and possibly also put a new product on restaurant menus.

As well as being known for thriving in dry conditions, the camels feed differently — gently plucking the leaves from mulga* trees much higher up than cattle can reach.

They are also messy eaters, meaning the leaves that fall out of their mouths land on the ground to either break down there and replenish* the soil or be eaten by the cattle that share the paddocks. Tony Lovell with some of the camels on his property. Picture: Nigel Hallett

There’s growing demand for camel meat around the world but it is also increasingly being used in Australia. It is being made into popular camel burgers at the Cunnamulla Cafe, and in soap and beauty products sold in the town, as well as being considered by top chefs in city restaurants.

Mr Lovell, who is chief executive of a farming company called Sustainable Land Management, said camels would never replace cattle but they were improving the land on the 809 square kilometre station 75km southwest of Cunnamulla.

“The last few years have been very character building,” Mr Lovell said of the drought that has affected a big part of Queensland for six years. Camels are one way Tony Lovell is trying to manage farming through the long drought. Picture: Nigel Hallett

“We are trying to do things a little differently. We do cell grazing — moving the animals around on a regular pattern so we have a larger number of animals on smaller area for a shorter period of time.

“All of our animals on the property will be in a couple of thousand acres (a few square kilometres) at any given time and then they are moved and they won’t come back into that area for months, if not a year or so.

“One of the things we look for is biodiversity*.

“There is also mulga, which is one of the major feeds out here which is reasonably high protein but it has a tannin* in there that binds* to the protein*.

“Cattle and sheep can’t break that off but camels have a bacteria in their stomachs that can.

“If we graze the camels and cattle together some of that bacteria transfers across and it increases the capacity* and ability of the cattle to extract nutrient from the plants. Some of the camels brought to the cattle station outside Cunnamulla. You can see the mulga trees they eat in the background. Picture: Nigel Hallett

“I don’t think camels will ever replace cattle and we have no intention of camels replacing cattle.

“I think they can be very complementary*.

“In an ecosystem* like this that can be incredibly variable and that runs from one extreme to the other there’s a lot of diversity* that’s needed so you need plants and animals that can deal with all those various climatic* conditions.

“I think the combination of cattle and camels blend together very nicely.”

Most Australian camel meat goes to the US and Middle East but Mr Lovell said the company had also asked top chefs to try it.

“We had a few senior chefs try camel meat and they were impressed with it,” Mr Lovell said.

“The vision longer term is can we develop a camel meat industry in this region.”

This is a video about camel burgers and camel milk

CLASSROOM ACTIVITY
1. Try a camel burger
Create a jingle (words for a song) and script for a radio advertisement for camel burgers. Your aim is to convince people who are concerned about the environment and helping farmer to try them.

2. Extension
Create a diagram that will show younger students the ways in which camel farming is helpful and sustainable.

HAVE YOUR SAY: Would you eat camel meat? Why or why not? Give reasons to explain your opinion.No one-word answers.